If you’re reading this, you’re probably not the gamer who is thinking, “You know, I think I’ve heard something about this “Warhammer” thing before. I wonder what it is. I should inquire further, perhaps there is a book at my local public library that can explain it.” No, I imagine you are either a dedicated tabletop gamer anxious to know if Battlesector accurately represents your hobby, or you are a longtime video gamer both astounded and dismayed that Games Workshop has licensed yet another product and curious if this new game rises above the very low bar of Warhammer 40K video game mediocrity. Or maybe you’re both.

Well, the good news is that Warhammer 40,000: Battlesector is indeed a rare, winning use of the license and a more-than-respectful re-imagining of the tabletop experience in digital form. Fans of both Warhammer and strategy games, in general, will find something to enjoy, and tabletop fans who might be jonesing for a match but stuck without some friends to play against will recognize the experience as familiar. 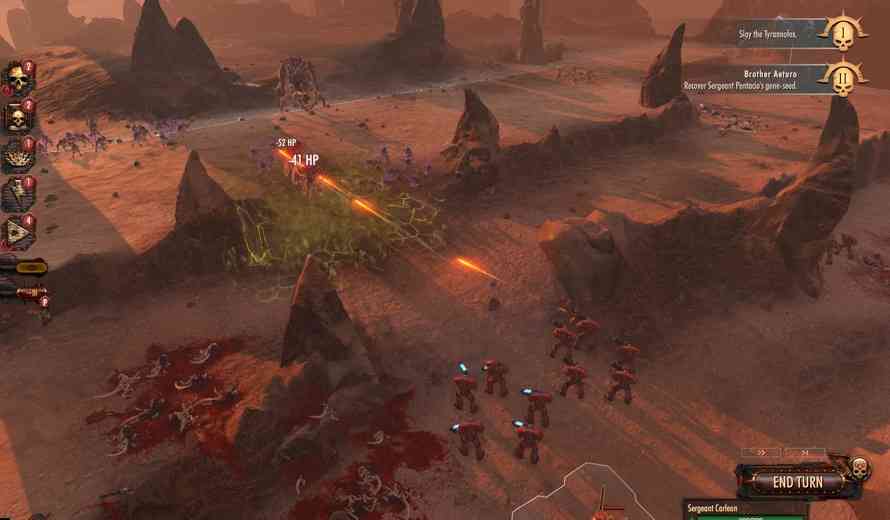 Without diving too deep into the bottomless pit of Warhammer 40K lore, Battlesector features two factions, The Space Marines (specifically, a subset called Blood Angels) and the rapacious and evil enemy faction of lizard-like Tyranids. The 20-mission campaign centers on saving Baal (the Blood Angels’ homework, duuuh) from an increasingly virulent Tyranid infestation. Some may be disappointed that there are only two factions and one campaign, but Battlesector is clearly set up for later DLC and additional factions drawn from the immense Warhammer 40K universe.

By and large, the game follows the general turn-based flow and rules of a tabletop game, with each side having a set number of army points to distribute among a very wide range of familiar units, including Assault Squads, Intercessors, Genestealers, and Dreadnoughts. For every enemy killed, a momentum meter fills, which can be spent on temporary buffs, for example, or action points. At the conclusion of each mission, players are awarded points to spend on upgrades, weapons, and powerful new hero abilities. Just like the tabletop game, a Battlesector mission presents a considerable number of challenges and opportunities, from selecting and equipping an army to making use of cover and other tactical mechanics during the encounter. The campaign takes the action to a nicely diverse array of environments, each with clearly defined tactical complications.

Battlesector — a little like the tabletop games on which it is based — is not a strategy game that lends itself to immediate understanding and effortless mastery, which is not to say that the mechanics are poorly explained, just slow to take hold. The enjoyment really comes from a growing understanding of the systems, coupled with accessing increasingly useful and powerful units, and the flexibility of choice as the units become available. For those that tire of the Blood Angels, it is possible to play the Tyranids, but only in one-off skirmishes apart from the campaign. 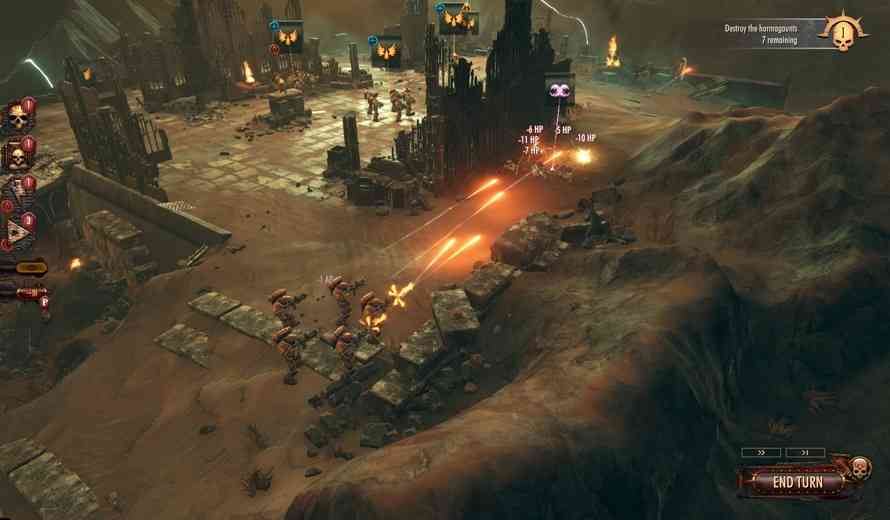 It Ain’t Over ‘Til the Space Marines Sing

I’ve always thought that Warhammer 40K was something very much akin to grand opera, with every leading character larger than life, stories and lore that pushed melodrama into the stratosphere, and epic battles in which the fate of one faction or another always seems to hang in the balance. Heroes and villains are nothing if not clearly defined. It’s all without much nuance but the scenery-chewing approach can be great fun. Although the actual writing is fairly mundane, Warhammer 40,000: Battlesector has some deliciously oversized voice acting from characters like Sergeant Carleon and the Sisters of Battle, accompanied by stirring, testosterone-fueled orchestral/choral music infused with powerful percussion. It’s a great soundtrack.

Graphically, Warhammer 40,000: Battlesector is a better-looking and more detailed game than I was expecting. Tabletop players and miniature painters will probably approve of the iconography and adherence to the traditional concepts of Space Marines and Tyranids and their units, which look great zoomed in. The game’s UI also works well to convey a lot of information and keep the tempo of the missions moving forward. 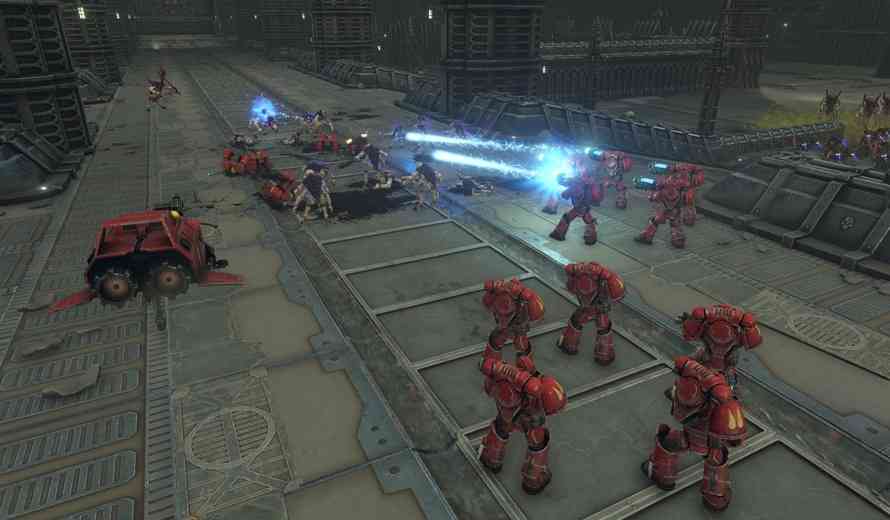 Thanks to offering only two factions and a limited number of modes, Warhammer 40,000: Battlesector might not be the deepest or most complete strategy game ever made, but it’s definitely one of the best and most authentic uses of the license to date. Challenging strategic battles, appropriately melodramatic voice work, more than decent graphics, and a respectful translation of the tabletop game to a digital format make this a must-have for fans of the franchise, and even appealing for casual strategy fans who are not yet invested in all things Warhammer.

Plan B: Terraform, Sci-Fi Sandbox, Coming 2023
Next NEO: The World Ends With You Review – Almost Everything You Could Ask For
Previous Ragnarock Review – Beats Done to Rock at a Hard Pace