Ragnarock Review – Beats Done to Rock at a Hard Pace

Ragnarock is a rhythm-based VR game that takes the core concept of Beat Saber and gives it a Viking — and Metal — flavour. It’s got heart, and doesn’t take itself too seriously, and it will definitely get you sweating like a Thrall if that’s what floats your longship.

The Nordic scenario in Ragnarock places you in the aforementioned Viking raiding boat, with horn-helmeted rowers looking to you for rhythmic guidance. The better you play, the faster and farther the ship travels. Instead of slicing cubes with a lightsaber, in Ragnarock you’re pounding runes with hammers on a drum as they fly at you, Guitar Hero style, to your chosen song. Timing is key: pound a rune too soon or too late, and it will cost you, but do it just in time and it will splash gold and give you full points. Hammer a series of runes well and you’ll build up to a bonus boost that allows you to pound a shield and speed up your ship for a time.

The music is the star of the show in Ragnarock, and it’s awesome. Songs all have a Norse or Celtic theme, and it’s a blast to pound away with your hammer as fast and upbeat metal and accordion rhythms drive you on like a berserker in battle. Like a lot of VR games, this is a serious physical workout that forces you to swing both arms quickly, so be prepared and maybe even stretch beforehand (seriously). You’ll also want to have a big, safe space cleared around you so that you don’t accidentally whack your dog as your arms flail during the climactic musical moments.

Ragnarock can be challenging, especially if you choose the highest of three difficulty options for each song. I never broke higher than 1,000th place on the Leaderboards, even when I tried my hardest, so there’s clearly a lot of skill to be learned with dedication if your arms are up to the commitment. My middle-aged body was frankly overwhelmed during the toughest sequences when those rune discs seemed to fly at me in all four lanes at once like a bullet-hell shooting game. 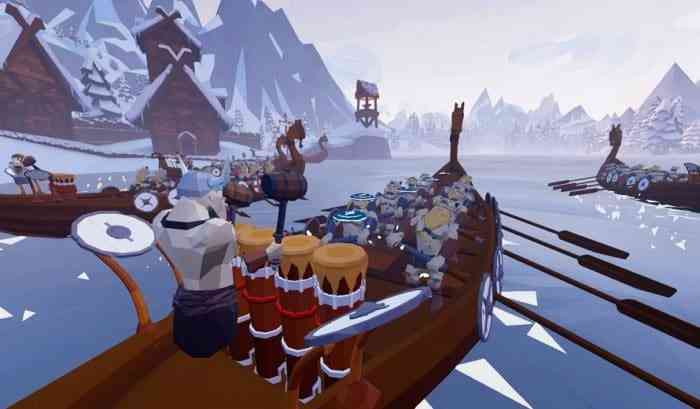 The experience can be repetitive, though. In Beat Saber, you are confronted with some puzzle-like twists amidst all the chaotic slashing: sometimes you have to switch hands, or slice a cube from a certain direction, or move to avoid an oncoming barrier. These dashes of extra challenge make that game a workout for your mind in addition to your body. Ragnarock feels more one-dimensional, with one basic gameplay mode that varies only in speed depending on the song you’ve chosen. You’re really just pounding in Ragnarock, which is undoubtedly lots of fun but a bit lacking in variety.

Speaking of songs, that is another area that could be deeper. There’s only 30 songs on the playlist, and while they’re a great and eclectic bunch of rousing tunes you’ll get through them in just a few hours, even if you try every difficulty level. I do like that you can customize the playlist though. The usual PvP mode and Leaderboard bring some extra gameplay but not much. Ragnarock suffers from the familiar shortcoming seen in many music rhythm games; the included songs just don’t offer enough content to keep the experience fresh over the long term.

Your Arms Will Be Thor

Visually, Ragnarock is bright and colorful but not a stunner. Your fellow Viking shipmates, rowing the boat as you play, look cartoony and a bit crude, and have a limited range of movement. It’s clear that the Norse theme is meant to just be a light set-up for the rhythmic gameplay, and it’s not taken all that seriously. This isn’t a game that’s trying to bring you an authentic “Viking experience” in first-person VR; Ragnarock is about having a sweaty good time banging a drum to loud music. Case in point: there are five different landscapes to row through but I was so busy drumming I didn’t have much time to look at them. They seemed quite pleasant and again, colorful, but they had a low-res quality to them that didn’t feel as immersive as it could have.

It wouldn’t be unfair to summarize Ragnarock by saying it is Beat Saber with a Viking theme. And it is undoubtedly another solid VR workout game that will have you burning boatloads of calories, but having so much fun you won’t notice how sweaty you are. But Ragnarock lacks some of the elements that make Beat Saber great; there isn’t enough variation in the rhythmic actions you do to the music, and the playlist of songs is a bit paltry (although the devs have said they will be adding to it). Combine that with mediocre visuals and Ragnarock is a decent game and fun way to get a great workout, but one whose repetition might make you want to hang up your helmet after a while. Pick this one up if you’re a fan of Norse themes, you’re looking to take a break from Beat Saber … or you just want to rock.