Not that the franchise ever went away, but lately it seems like you can’t fire up a console or your PC or mobile device without stumbling over a new Warhammer-related game. Just in the past couple of months, we’ve seen the release of Age of Sigmar: Storm Ground and Necromunda, and tabletop players just found themselves in possession of the Age of Sigmar 3rd Edition rules and an epic box set called Dominion. Blood Bowl 3 and Total War: Warhammer 3 are also on the near horizon, so the deluge isn’t slowing down. But we all know there’s a dark side to such fecundity: not every game is worth the time and money of even the Warhammer faithful, let alone the casual player.

Warhammer 40,000: Space Wolf began as a third-person, turn-based tactical shooter with deck-building elements folded in. It premiered on iOS in 2014, arrived on Android a year later, then landed on the PC in 2017 and Nintendo Switch in 2020. Including the accumulated DLC, Space Wolf has now become available on current-gen consoles, including the Xbox Series X/S (and backward compatible with Xbox 1).

Considering the incredibly vast amount of Warhammer 40K lore, races, factions, and potential storytelling material, Space Wolf’s campaign is pretty dull and forgettable, essentially consisting of small-scale skirmishes between the player’s Space Marines/Space Wolves and AI opponent Chaos Space Marines and Cultists. Like in the familiar X-Com games, encounters are played out on a grid and each side has a limited number of actions per turn. Adding deck building to the mechanics, movement and weapon cards determine the choices and actions, with some interesting twists like weapon cards filling in for movement and the ability to chain cards together. Like most games in the deck-building genre, cards can be swapped out and new cards can be forged, though the how and why of this is never explained in the very minimal tutorial. The deck building and battling aspect of Space Wolves is probably the most successful and evergreen mechanic in the game, but there are also much better and deeper Warhammer deck-building games, notably Warhammer: Underworlds Online. Still, there is an adequate and even marginally engaging card game hiding underneath the seven-year-old visuals. 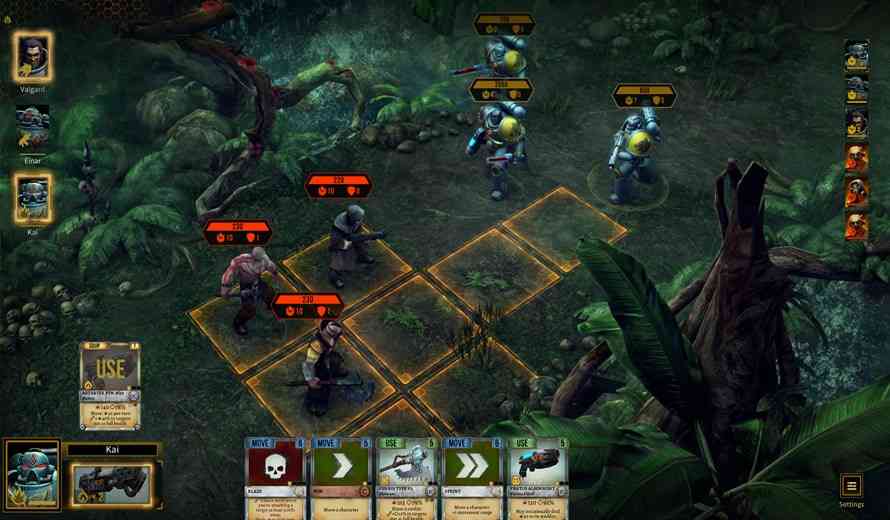 The objectives behind each mission have some variety, with chests to loot, characters to protect, and terrain to take advantage of or overcome, but the default goal is to kill the enemies. There is a decent selection of cards, though learning which cards work well together takes a lot of trial and error. Like most tactical turn-based games there’s always a disconnect between the implied high stakes battles and the measured pace of the encounters that saps them of immediacy.

While the mechanics and gameplay of Warhammer 40,000: Space Wolf were probably notably fresh in 2014, it’s doubtful that even then the game’s low-res and light-on-detail graphics pushed the mobile systems very hard. They’re incredibly primitive-looking circa 2021, especially on powerhouse consoles like the Xbox X/S and amazingly, the controls and movement remain unrefined and don’t seem to have been fine-tuned much for the new systems. From character models to animations, from the colorful albeit very basic-looking environments to the simplistic weapon effects, everything about Space Wolf just looks dated and really out of place on such capable hardware. On a more positive note, and something that doesn’t need to worry about being out of date, the game’s musical score and voice work are generally effective. Sure, the writing or narrative aren’t terribly sophisticated but nuanced stories have never been a Warhammer thing. 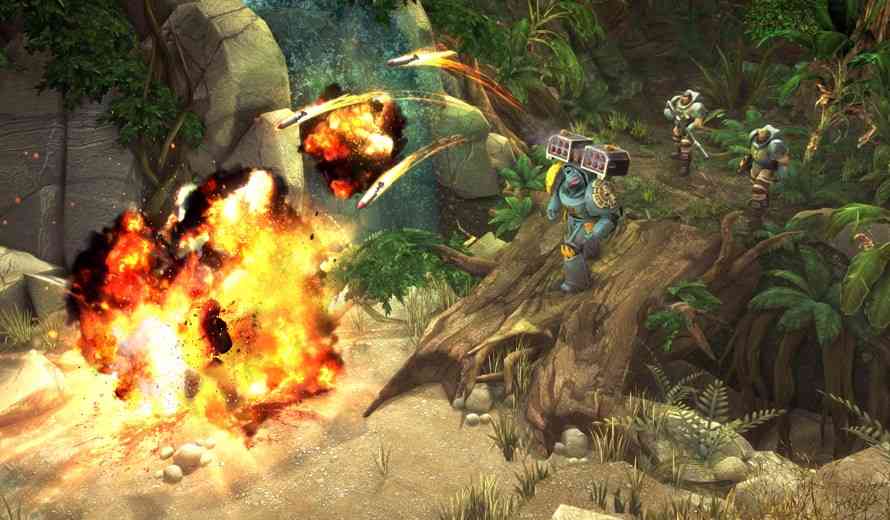 I might be wrong, but I imagine that true blue Warhammer-heads probably picked this game up long ago, if not on mobile, then on PC or Switch or even PS4 or Xbox. I doubt that they’re going to grab it again, included DLC or not. That leaves current-gen console owners, combing through the store, desperate for something new and possibly enticed by a familiar franchise name or the turn-based genre. Warhammer 40,000: Space Wolf isn’t it. In fact, it is the precise opposite of new, a port of a competent, occasionally engaging but badly aged turn-based mobile tactics game with painfully dated graphics, poorly explained mechanics, and based on a very narrow slice of Warhammer 40K lore. With so little effort put into making Space Wolf feel like it actually belongs anywhere near the new systems, it’s hard not to be anything but disappointed and cynical about this release. Graphics aren’t everything, of course, but Space Wolf’s other elements aren’t nearly strong enough to tip this one into the win column.