Right on the tail of their success with the recently released Monster Hunter: Rise, Capcom is poised to hit a knockout 1-2 combo with the next entry in their other monster-slaying series, Monster Hunter Stories. Set in the same universe but filled with distinctive qualities that make it entirely its own, Monster Hunter Stories 2: Wings of Ruin (MHS2) breaks the mold in a way that feels fresh and exciting, without ever alienating long-term fans of the franchise.

Maybe it’s just the mountain of well-done monster meat and “herbs” talking, but I think this might be my new favorite Monster Hunter. 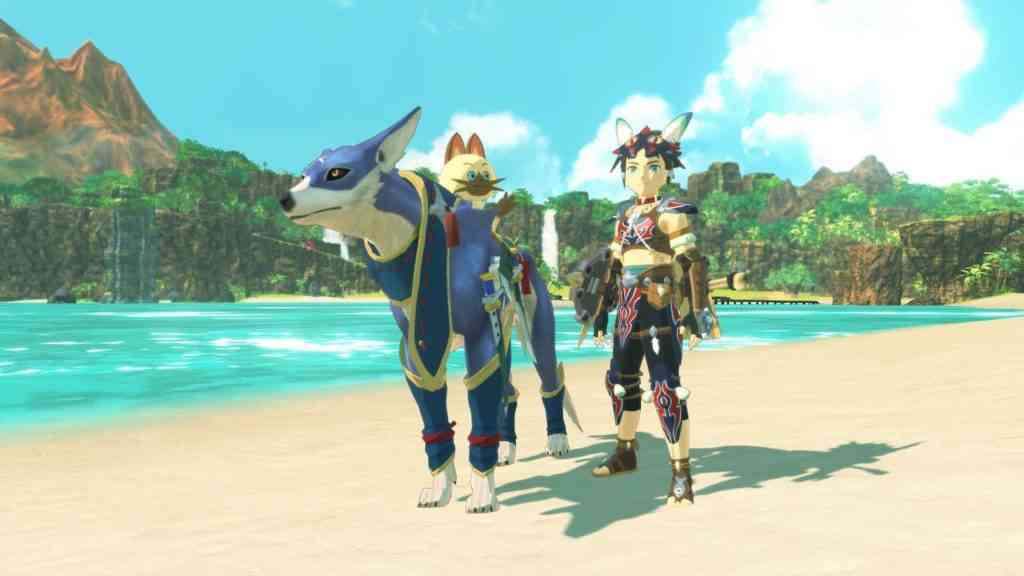 Don’t fret if you missed the first installment of director Kenji Oguro’s Pokemon-esque adventure. The tale told in MHS2 stands on its own, with only sporadic callbacks to the original using a few familiar faces. In fact, having prior knowledge of the intricacies found in the mainline Monster Hunter titles is infinitely more beneficial than experience with the first entry in its spin-off series. So much of what you’ll utilize during quests will be instantly recognizable for veteran hunters. Bombs, traps, elixirs, bugs, and a manifold of other familiar items will aid you along the way, and knowing what these things provide made the opening hours that much more enjoyable.

While the world-building remains on par with its big brother, Monster Hunter Stories distinguishes itself in two key ways. The first being the story itself. This has never been a franchise prone to winning awards for its writing. I think you’d be hard-pressed to find someone that could explain what the hell has been going on all these years. But, of course, that’s never been the point. This is a series about carving up the biggest, baddest beasts you can find and turning them into blades, and armor, and guitars. And that is still very much what’s going on in MHS2. Only, now there feels to be a deeper meaning behind what it is you do.

Riders on the Storm

You play as the descendant of a legendary ‘Rider’ named Red. Rathalos have suddenly vanished across the world, and it’s not long before you come across a curious ‘Wyverian’ girl named Ena. Carrying a Rathalos egg and on her way to Rutoh Village (the same village in which Red forged bonds with the Wyverians), you decide to accompany Ena on her journey. Upon your arrival, the egg hatches, and what comes from within is prophesied to bring ruin upon the world. 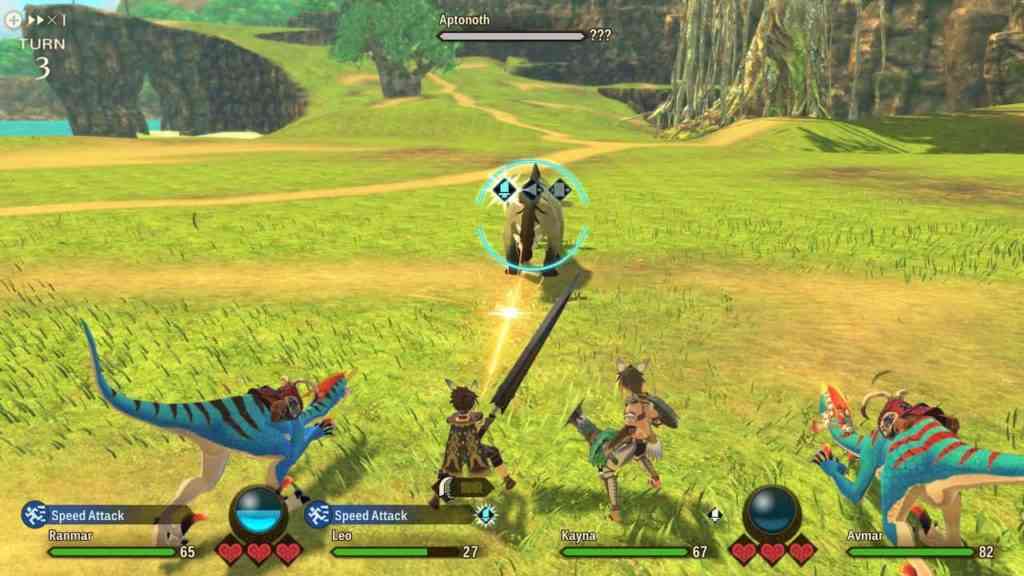 The narrative isn’t going to knock your socks off. But it does act as an engaging backdrop to the second of MHS2’s unique elements – the turn-based combat system. Which, coupled with a creature-catching mechanic that will have you feverishly attempting to hatch ‘em all, MHS2 ends up doing Pokemon better than… well, Pokemon.

A rock-paper-scissors-style contest is at the heart of MHS2’s combat. You and your aptly titled ‘Monsties’ fight side-by-side using a variation of power, technical, and speed attacks. Power beats technical, technical beats speed, and speed beats power. Anticipating your opponent’s move and countering with the right defense is key to victory. Things are further complicated when you also need to determine which weapon is best suited for your battle. It’s a winning formula that gets progressively more difficult, rewarding players for taking the time to learn the statistics of each enemy. And I’d be remiss if I didn’t mention some of the absolutely incredible battle animations that Capcom created, specifically when making use of combination attacks.

But for as well developed as MHS2 is, it is without question limited by the hardware it was developed for. Severe lag permeates the home areas, at times making it difficult to even look at the screen. When you’re out in the wild, things generally run as smoothly as they can on a glorified Nvidia tablet from 2017. Though venture into parts of the map that have a slew of NPCs and assets about, and the game quickly starts to fall apart at the seams. I won’t fault it for not running as well as the recently released Monster Hunter: Rise, however, as MHS2 is a massive open-world, akin to Breath of the Wild. It does the best it can, and I’m okay with that. 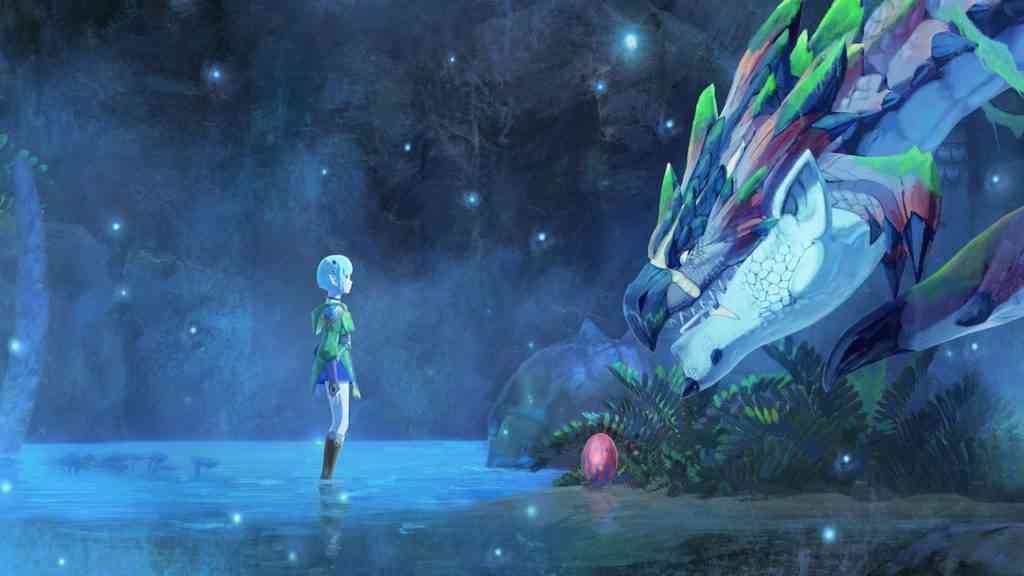 In addition, the tutorial could have been fleshed out a bit further. I’d imagine newcomers might feel a bit overwhelmed, but then again, that’s how I’ve felt about every Monster Hunter game. Maybe that’s what Capcom wants; to only equip the player with just enough to get their feet moving. From there, it’s on you, and bettering yourself through true experience as opposed to experience points becomes the soul of your journey. If that’s the case, it’s here that MHS2 and traditional Monster Hunter games become indistinguishable.

Monster Hunter Stories 2: Wings of Ruin is the perfect example of a game I didn’t know I needed. It scratches the itch that Pokemon hasn’t been able to touch in years, all the while setting itself apart from the influences it drew from. While it may be limited in certain aspects by the Switch hardware, there’s no denying that this is one of the best games for the system in 2021. 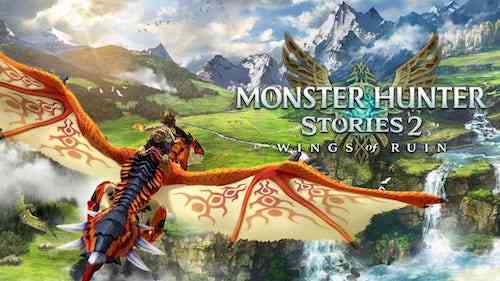