As probably any fan of Games Workshop’s Necromunda tabletop war game can tell you, placing a first-person shooter in the dark and gritty world of the Underhive seems like a no-brainer proposition. Set in a lawless society ruled by rival gangs and with an atmosphere that makes the Metro series seem positively optimistic, Necromunda: Hired Gun is a run-and-gun, action-filled title that plays like a tossed salad of recent shooter mechanics. It does a good job of world-building off of the tabletop game’s lore but forgets that even action game stories (and gamers) need places to breathe.

In an already dark and oppressive Warhammer 40K universe, Necromunda (the board game and setting) takes both the action and the mood to a literal new low. It takes place on an Earth-like planet, the titular Necromunda, a world whose formerly inhabitable surface has been ravaged by pollution and industrial exploitation and whose trillions-strong population has moved to vast Hive cities stretching miles below and above the planet’s surface. At the lower depths of the termite mounds of humanity, fresh air and sky are the stuff of barely-believed mythology. Instead of being a society of laws, the Underhive is a collection of rival clans, each with a specific role and turf.

The tabletop game has a large roster of clans, but Hired Gun focuses on three: House Goliath, House Orlock, and House Escher. You play as a mercenary, which means that you have no loyalty to any of the Houses and can freely exploit the natural animosity between them, take the side of whichever House pays you the most coin, and occasionally allow them to fight each other while you watch. Hired Gun’s story of inter-clan rivalry and retribution is a confusing mess of names and motivations without some significant familiarity with the tabletop game and its machinations. Still, it takes a distant backseat to the action.

Over the years, first-person shooters and action games have layered into the gunplay several mechanics like wall-running and grappling hooks. Hired Gun adds them to the mix as well, along with just about every other standard shooter mechanic: upgradeable weapons, armor and abilities, biotech implants that provide passive and active special moves, an upgradeable companion (in this case, a cybernetic mastiff dog), and a hub town, Martyr’s End, with vendor NPCs and a mission board. If Metro, Doom, Serious Sam, Cyberpunk 2077, and developer Streum On’s previous 40K game Space Hulk Deathwing had a child (more than possible given Necromunda’s twisted nature), lore), their progeny would be Hired Gun. 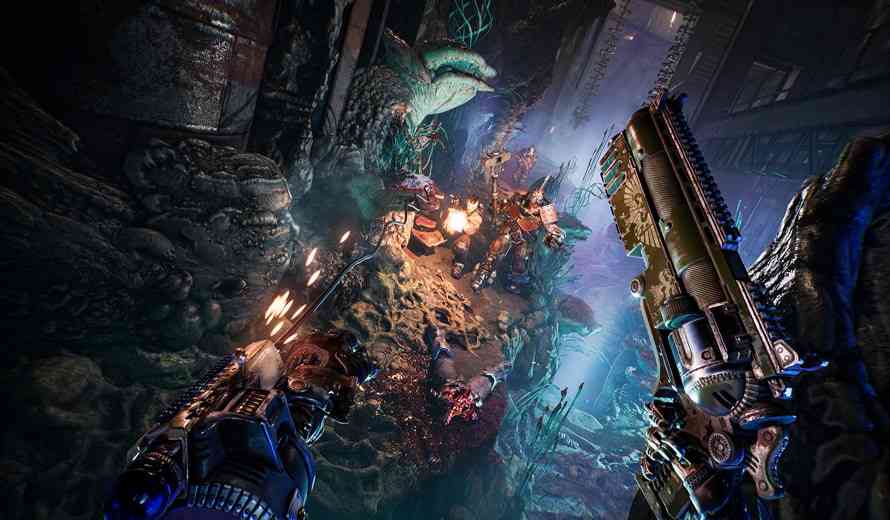 But derivative or borrowed mechanics in games are nothing new; in fact, they provide a shorter learning curve and a sense of familiarity. There is mostly nothing wrong with the action in Necromunda: Hired Gun. It’s certainly fast paced, and there are many fun weapons and abilities to play with. Thanks to the warring clan’s conceit, a large variety of enemy types can co-mingle in an area, providing a simultaneous challenge from human, mechanical and supernatural foes. No one weapon or ability is overpowered, and the cyber mastiff is a great tool in combat. What’s wrong with Hired Gun’s action is that it’s almost all there is to the game, and every main or side mission eventually feels the same. The repetition is only broken up by the rather forgettable time in the hub town to upgrade and get the next mission assignment or choose the next bounty hunt side quest. What Hired Gun desperately needs is variety, and the fact that the upgrade system is entirely driven by earning money means that replaying chapters or completing bounties and grinding through more combat is a necessity and  adds to the fatigue. Although it isn’t quite as buggy as the studio’s previous shooter, there were plenty of audio glitches and crashes that ruined progress through a mission.

Deja Vu Over and Over Again

It’s a shame because although the character models aren’t amazing, Hired Gun’s environments and level design do a generally effective job of realizing the depressing, dark world suggested by the tabletop game and the sprawling, machinery-filled Underhive. Like the immense underground train that powers the second chapter, some set pieces are impressive, while other areas feel like a collection of repetitive, empty rooms searching for a purpose and generic piles of abandoned scrap. The same mix of both inspired and repetitive holds true for enemy design, which takes its cue from the three opposing houses (and Games Workshop miniatures). While the battle music defaults to shooter-standard heavy metal, some of the characters are voiced (if not always written) with energy and flair, particularly the Scottish brogue-infused player character. 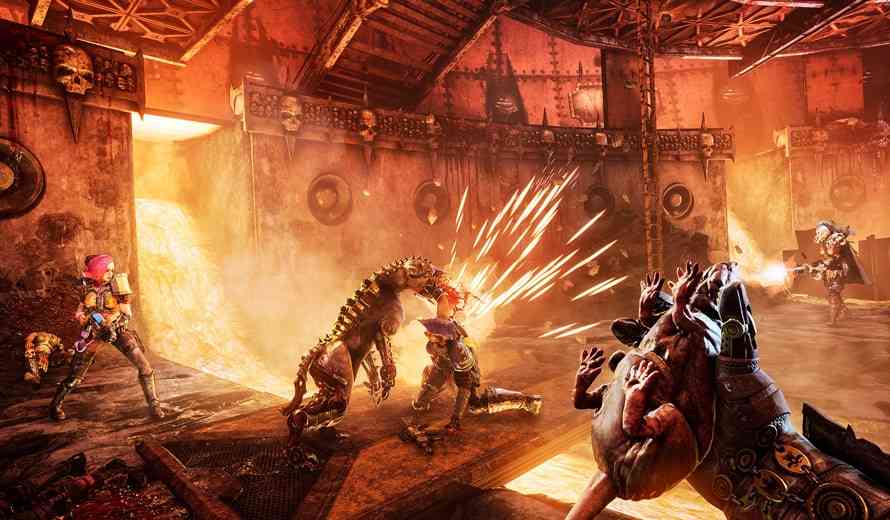 Like so much of the Warhammer 40K universe, Necromunda is a richly imagined world filled with the potential for conflict and storytelling. Using it as the setting for an action-filled shooter makes total sense. Although its mechanics are essentially a greatest-hits collection of ideas from other shooters, Necromunda: Hired Gun is a competent introduction to this particular slice of the Warhammer 40K-verse. At some point, however, repetition and fatigue with the one-note approach to pacing and the relentlessly hopeless nature of the world set in. You begin to desperately hope for some humanity, emotional depth, humor, or variety…which I guess ultimately is the plight of the Underhive’s residents. It just shouldn’t be that of the gamer. 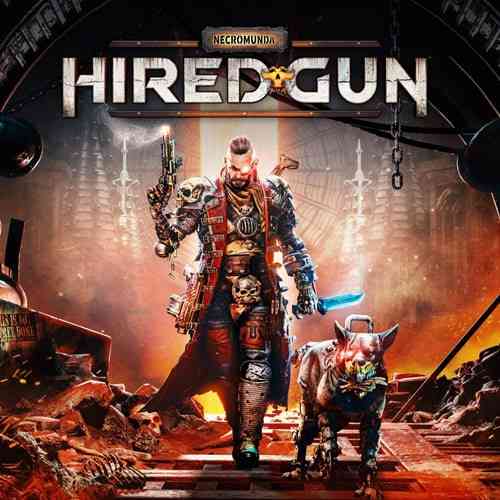