Space Hulk: Deathwing Is Great Fun, When It Works

The Warhammer series in general has had various adaptations. Some being downright fantastic, while others have left us wanting more. The games typically follow the strategy format, and it’s big battles loaded with cannon fodder of all shapes and sizes works quite well with this format. Other titles, such as Space Marine, worked well too, for other reasons. Deathwing takes the approach of a format that feels like it was overdue. It feels like all the pieces were lined up for this to be a solid addition to the franchise, however Space Hulk: Deathwing comes up short due to some serious technical issues.

Streum On Studio and Focus Home Interactive have teamed up to bring us a new entry in the Space Hulk series of games, an offshoot in the Warhammer 40K Universe. Space Hulks are massive gatherings of derelict space ships and more often than not, teeming with all sorts of hostile life-forms, as well as some potent artifacts that are worth the risk. In Space Hulk: Deathwing, you and your squad of Terminator Marines are tasked with investigating and purging one of these said Space Hulks in the hopes of finding ancient, powerful artifacts. You don’t have to have three friends to play this as the AI in the single player experience is serviceable. That being said, this is absolutely a game that feels better with other non-AI players. Teaming up with three of your friends to tackle a near-endless horde of monsters is a solid formula to build a game around, and Deathwing is absolutely a much stronger experience with friends than on its own, despite the technical issues. 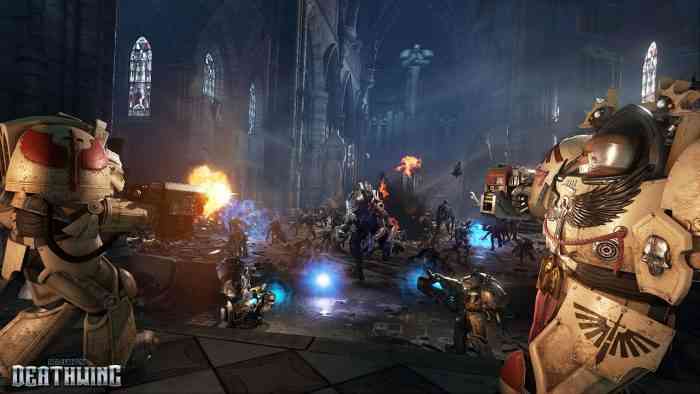 You have a few different classes to play, based on your preferred playstyle. You can go about opting into the close-combat route, using solely melee weaponry, or you can opt for a more tactical approach, using guns almost as big as your substantial suit of armor. There are also a few different support classes to play as, with the Apothecary taking on a healing role, and the Librarian serving as the major support role, doling out buffs to help even the terms. There’s a fair bit of customization as well. Thunder-hammers, chainswords, bolters, flamethrowers and plasma cannons are just a few of the many pieces of your futuristic toybox, and boy do they do the job of slaying Genestealers.

Combat is sufficiently tactical, and it requires you to be aware of your surroundings, and boy are those surroundings impressive in Space Hulk: Deathwing. The folks at Streum On are clearly major fans of the 40K universe, and they have absolutely nailed the style the universe is known for. There are some impressive settings in this Space Hulk, to say the least. Despite the gray, drab interiors of the various ships, the occasional sweeping pseudo-churches and ancient medieval architecture serve as some pretty fantastic set pieces to battle all the horrors that lurk within.

“Thunder-hammers, chainswords, bolters, flamethrowers and plasma cannons are just a few of the many pieces of your futuristic toybox, and boy do they do the job of slaying Genestealers.”

The initial impressions for Space Hulk: Deathwing start off strong, but there are some bugs that you and your Terminator squad can’t quite squash. During multiple sessions, the game crashed unexpectedly, often at the one hour plus range. Progress doesn’t persist across campaigns, so when you lose out on a session due to the game crashing unexpectedly, it didn’t deter me from wanting to play more, but when the crashes occur frequently enough, it still becomes a serious contributing factor towards my frustration with this game. The game also feels very poorly optimized, with it dipping down horrendously more often than not. You require a seriously beefy PC to maintain a solid framerate, but it’s at such a point that the requirements aren’t something that can be met by a majority of people who play on PC. Shifting graphical options felt like it didn’t yield any major impact, which stood out as a major red-flag to me. Despite running off of the new Unreal Engine, it feels like this game could run much smoother, which less demanding requirements.

Space Hulk: Deathwing frustrates me because it is one of those games where the initial impressions are strong enough that you think it would be a legitimate blast to play. There’s a bevy of customization options, brutal combat, and stomping around as a terminator marine feels straight-up badass. That intoxicating feeling is marred by the steep system requirements and frequent crashes though. Despite the faithful adaptation of the general feel of the 40K universe, a feat that’s not easy to accomplish. the technical issues of Space Hulk: Deathwing aren’t something these Terminator Marines are able to handle for very long. As of writing, there’s already been an optimization patch, however it feels like much more is still needed before the Emperor would be done proud.