The Official Nintendo Switch Pre-Order Trailer for Secret Neighbor, the spin-off for the acclaimed Hello Neighbor game, will release this month on August 26.  The game has already been released on Steam for the PC, as well as iOS, Android, Playstation, and Xbox platforms. 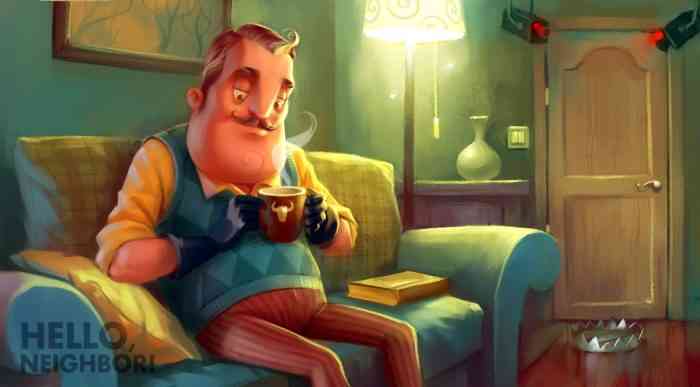 The original Hello Neighbor was a horror stealth game where you attempted to uncover the secret in a neighbor’s house without being discovered.  The main “twist” of the game is that the neighbor’s AI will learn from your previous break-in attempts and adjust the house’s defenses and its behavior accordingly.

The spin-off is a multiplayer version whose premise feels very much like Among Us.  In the game, a group of players, with the evil Neighbor amongst them, will attempt to unlock the basement door as well as not get caught by the Neighbor.  The Neighbor, which is not played by the game AI but in fact another player, will attempt to set traps and eliminate the intruders.  If you like Among Us and Hello Neighbor, this new multiplayer spin-off may be worth a shot.

There are some slight innovations from Hello Neighbor.  Primarily, players are able to create their own maps and houses in order to retain a fresh and new experience.  In addition, there are different classes now for intruders to choose from.  For example, the Leader has the ability to speed up any nearby allies as well as immobilize the neighbor.  Likewise, the Neighbor will have 2 additional classes – a Clown and a Butcher.

What do you think about the spinoff to the multiplayer Hello Neighbor game? Let us know down in the comments, or hit us up on Twitter or Facebook.

A Way to Be Dead Offers Multiplayer With Some Guts
Next
YouTube Icon Killer Bean Is Getting His Own Game
Previous
Black Myth: Wukong Releases New Gameplay Trailer and It Looks Gorgeous