Time and Space Are Not What You Think

Hot on the heels of Yoru, new Agent Astra is about to join the Valorant team, which means playing this popular hero-based shooter is about to get more complicated. And dangerous. Can’t forget about the danger. Her details were leaked recently, so Riot Games decided to throw up their hands and officially unleash her character trailer on the world, and she looks amazing. Astra seems to be an agent who specializes in detecting and identifying the location of the enemy, either by seeing through walls or building her own attack-detecting barrier. Her trailer repeatedly shows her using a scope and sniping pinned enemies from a distance, so we’re tentatively assuming that she’ll be a long-ranged character. Either way, her purple energy attacks look really cool.

The description of her official trailer reads as follows: “She’s already got it all planned out. Harness the cosmos and control the fight as Astra, the newest Agent in VALORANT.” This seems to suggest that she’ll be a strategic and mechanically complex fighter, or at least one who focuses on crowd control. Given that her trailer shows her appearing to trap and inhibit the movements of targets so she can snipe at them from range, we have some confidence in stating that she’ll likely have crowd control abilities.

One particularly cinematic moment shows her turning entirely purple, ascending into the sky, and getting a bird’s eye view of the battlefield–the better to rain fireballs down on targets. We don’t know which of her abilities lets her do that, but we can’t wait to find out. Same goes for the rest of her kit. There are few character archetypes cooler than ‘cosmic firepower’, so needless to say, we’re on the edge of our waiting for Astra to appear in the actual game. You probably are, too. 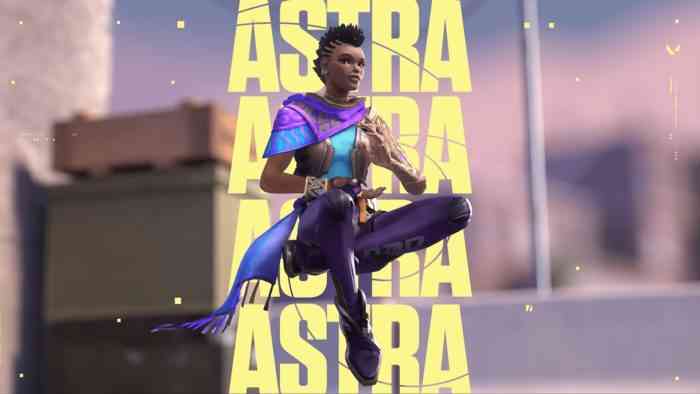 Valorant is now available on PC. A console release is planned in the future

Who do you main on Valorant? Let us know down in the comments, or hit us up on Twitter or Facebook.