Fortnite Chapter 2 Season 4 recently began, bringing the Nexus War to the popular battle royale title. Nexus War brings tons of new Marvel content to Fortnite, including new points of interest, new skins, themed challenges, and more. Fortnite was its most enjoyable for me during the first two seasons, but Nexus War is the first season to actually win me over since the game entered beta. Fortnite is available right now for Xbox One, PS4, Nintendo Switch, PC, Mac, and Mobile. 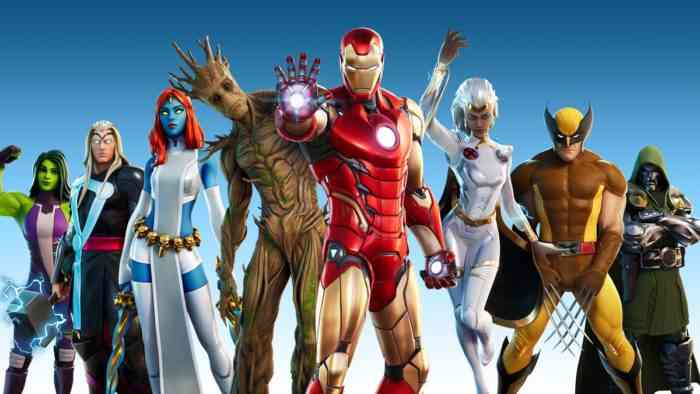 Nexus War has changed the Fortnite island for the better, bringing a Sentinel graveyard to the hillside between Lazy Lake and Weeping Woods, Stark Industries punched a hole near the center of the map, and Dr. Dooms Layer has taken over Pleasant Park. Each of these Marvel themed locations spice up the map in fun ways and give us new locations to explore that may feel familiar to comic book fans or fans of the Marvel cinematic universe.

The new skins included with the Nexus War battle pass are all Marvel themed, from Wolverine and Thor, to She-Hulk and Groot. My personal favorite skin that I absolutely needed in the battle pass was Wolverine, complete with several challenges to complete to unlock more wolverine themed content such as a spray and back bling. These licensed cosmetics seem like the future of the Fortnite Battle Pass, unlocking skins that could’ve legitimately sold on the item shop by progressing through the battle pass in unique ways that other battle royale titles haven’t tried yet.

The meta gameplay of Fortnite continues to change with Fortnite Nexus War, with the season offering multiple submachine guns and shotguns to choose between, and new Stark Bot Quinjet patrol landing sites acting like World Quests or Invasions in World of Warcraft. Basically, these Quinjets include PvE elements, so if you’re looking to get some kills but are scared to push enemy players, these bots have some loot for you to pick up. This makes the Quinjets in-game meeting points for conflict to break out beyond named areas such as Retail Row or Sandy Shores.

Skill-based matchmaking is quite polarizing as the system can be played with alternate accounts so that really good players have an edge, but Fortnite’s skill-based matchmaking seems better than Warzone or Apex Legends. I haven’t played Fortnite since season one, and being paired with other noobs made the experience more enjoyable than the last time I tried the game. Gone are the days of enemies building circles around me while I’m trying to sink a headshot.

Fortnite continues to evolve and improve in Chapter 2, and I’m looking forward to seeing what Chapter 2 Season 5 has in store, as long as it releases after I unlock Nexus War’s Iron Man appearance for Tony Stark. What do you think of Fortnite Chapter 2 Season 4: Nexus War? Let us know in the comments below!