Fortnite: The Last Laugh Bundle Gets You a Joker Skin

Some exciting news for DC fans. Yesterday, some DC characters began to reappear in Fortnite. Harley Quinn, Batman, and Catwoman are once again available as skins, along with their themed pickaxes and other gadgets. This is likely to be linked to the upcoming DC FanDome event taking place later this month. That is not all the news. Announced today, The Last Laugh Bundle will be coming to Fortnite in November. Why announce it now? Again, maybe because of all the hype accompanying DC FanDome. And maybe to beat the leaks that seem to plague Fortnite events and skin releases. 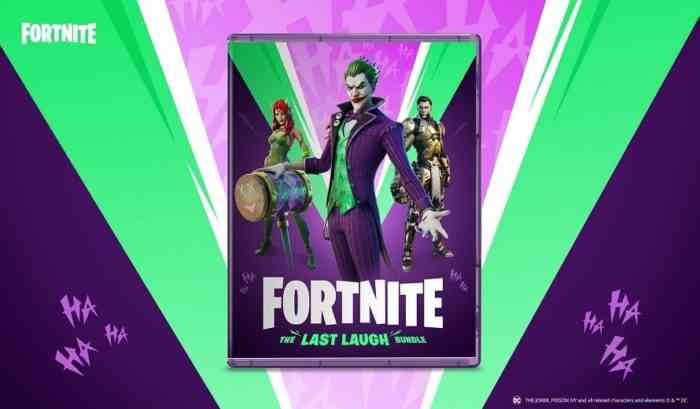 The Last Laugh Bundle is another DC crossover. It features Joker, Poison Ivy, and Fortnite’s own Midas. The Joker and Poison Ivy skins are not modeled after any of their film appearances, thank goodness. As with all guest and crossover characters, They will have their own pickaxes and back bling. Joker will also his own Pick A Card emote. Not only that, but during the release event, Tilted Towers will be transformed into a Gotham-esque area, so Chicago. I don’t know about you, but I’d also like to see a “BANG” Joke Gun-type emote for Joker.

We are expecting some exciting news regarding new DC games like Gotham Knights and Suicide Squad: Kill the Justice League at DC FanDome, so maybe there will be something revealed that ties-in this upcoming Fortnite content. We just have to wait another week to see. Fortnite: The Last Laugh Bundle comes out on November 17th physically and digitally. It can be purchased for 1000 V-Bucks. Fortnite is available on PC, Xbox One, PS4, Nintendo Switch, and mobile.

Will you be getting The Last Laugh Bundle? Let us know in the comments below.