Nintendo and Epic Games are teaming up to release a Nintendo Switch console themed around the popular battle royale, Fortnite. The new Nintendo Switch bundle is only set to release in Europe, New Zealand, and Australia so far, but this could change in the future. The Switch unit itself has a Fortnite design printed on the back, with two exclusive joy-con, a battle bus design around the home button, a Switch dock with a Fortnite design, and Fortnite pre-installed on the console. Fortnite is available right now for Xbox One, PS4, PC, Nintendo Switch, and mobile. 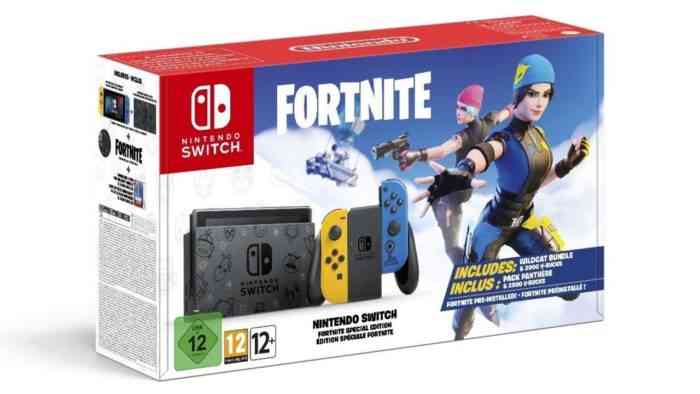 The two joy-con colours being included with the exclusive Fortnite bundle are yellow and blue, familiar colours to all Ninja fans out there. The bundle comes with a download code for the “Wildcat Bundle” which includes in-game outfits in addition to 2,000 V-bucks to help get you started. While there are no plans to bring this bundle to North America, if fans in the region are clambering for it enough, it may come further west in time. Until then, European and Oceanic fans of Fortnite can get their hands on this impressive Fortnite Nintendo Switch bundle.

So far the Nintendo Switch has had a handful of themed bundles for titles such as Splatoon 2, Pokemon Let’s Go Eevee and Pokemon Let’s Go Pikachu, and Animal Crossing: New Horizons. The new printed design looks like what you’d expect from a Fortnite bundle as it includes various characters from the popular battle royale game. The battle bus home button is very unique, including the button in the centre of the hot air balloon that the bus rides in on.

Will you be getting your hands on the Fortnite Nintendo Switch bundle? Let us know in the comments below!