The longstanding tradition of Fortnite crossing over with pretty much all popular IPs continues. They called Avengers: Infinity War the most ambitious crossover, but who knew that Fortnite would be such a big part of that event? The Avengers and Fortnite have shared events four times already, five if you count NoobMaster69’s appearance in Endgame. The onscreen and in-game events between the franchises were largely in part of the Russo brothers’ partnership with Epic Games, but now it has moved beyond that with the inclusion of content from Marvel’s Avengers by Crystal Dynamics and Square Enix. 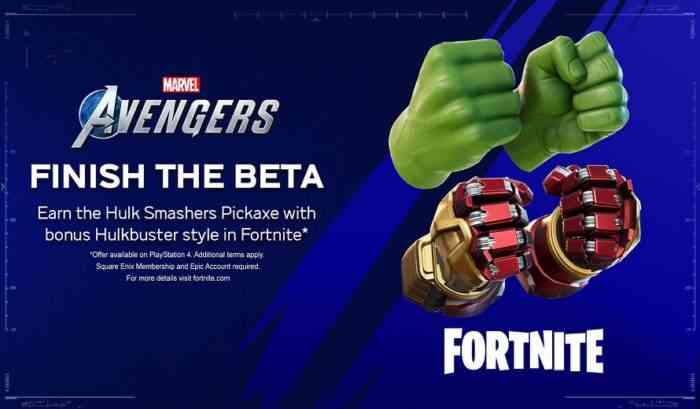 Yesterday, Crystal Dynamics held the second War Table presentation for Marvel’s Avengers, which unveiled content for the beta and post-launch. Turns out, players can unlock special content in Fortnite by playing the beta for Marvel’s Avengers on PlayStation 4 or Xbox One. By playing and completing the three HARM room challenges, players will be granted special pickaxes in the shape of Hulk and Hulkbuster fists for free. Of course, to play the beta you must pre-order Marvel’s Avengers or wait for the open beta between August 21st and 23rd. In order to successfully receive these crossover bonuses, you will have to make sure your Xbox Live/PlayStation account is linked with your Epic Games account and then link your Epic Games account with you Square Enix account.

If you are not going to play the beta on consoles, but you still want these special pickaxes, they will be available for purchase at a later date. Until then, they will be exclusive to beta players. Earlier this month, Captain America joined Fortnite in a solo venture for 4th of July. Though the timing of these crossovers seem close enough to be linked in a major way, they are probably coincidental. Marvel’s Avengers is coming out on September 4th for PC, Stadia, Xbox One, and PS4. Fortnite is available on PC, Xbox One, PS4, Nintendo Switch, and mobile.

Are you going to get these fists through the beta or purchase them later? Let us know in the comments below.