Streamers Playing Fortnite: “I Can Do This All Day”

Just in time for the Fourth of July, Captain America lands in Fortnite. Tomorrow, the United States will be celebrating their independence (hopefully) by distancing themselves from each other to (hopefully) slow the spread of COVID-19. I mean, they haven’t thus far, but now is a good a time as any to start doing the right thing. Anyway, Captain America. Yesterday, a short trailer was released showing Cap arriving on a cliff overlooking the Fortnite island. He puts his iconic shield on his back and jumps off to do this thing. 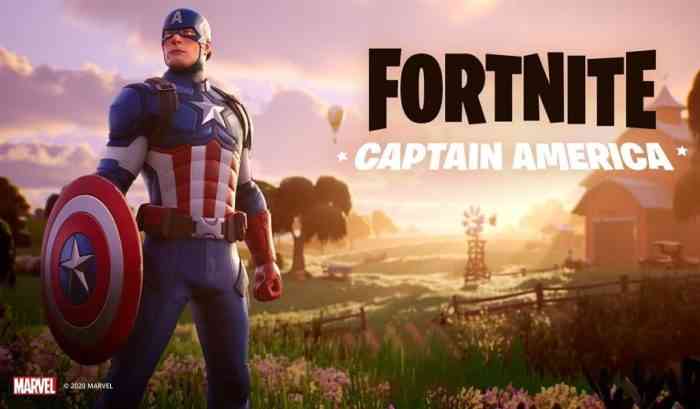 An interesting part of the trailer is that after Cap runs off, the camera pans over to where he appeared to reveal the symbol of the Bifrost, the rainbow bridge that Thor uses to travel between realms. While a ton of Avengers and other heroes have traveled to Asgard using the Bifrost, it is nearly always in the company of an Asgardian. This is perhaps a tease that other Avengers might be showing up on the island in the future. Thanos has appeared in Fortnite a couple of times in promotion of Avengers: Infinity War and Endgame, during which players could unlock Avengers-themed cosmetics. X-Men have also appeared in Fortnite.

Let’s get to what’s available now. In the Item Shop, you can purchase Cap’s Outfit, which comes with his Proto-Adamantium shield (umm, it’s Vibranium) that can be used as a pickaxe or worn as Back Bling. You can also get the Grand Salute emote, where the player takes a heroic stance while fireworks pop behind them. Cap’s Outfit can be purchased for 2,000 V-Bucks. Fortnite is available on PC, Xbox One, PS4, Nintendo Switch, and mobile devices.

Will you be donning the Star Spangled outfit and shield? Let us know in the comments below.