During IGN’s recent Summer of Gaming event, The Outsiders joined several other developers in announcing their next-gen title, Metal: Hellsinger. While the title will be a cross-generational title, the emphasis was placed on the next-gen version of the game. The game has visuals that would feel right at home in Doom, but it will include rhythm gameplay as if it’s the showdown between Tenacious D and the Devil. Metal: Hellsinger will be releasing for PC, PS4, PS5, Xbox One and Xbox Series X in 2021, though no official date has been confirmed. 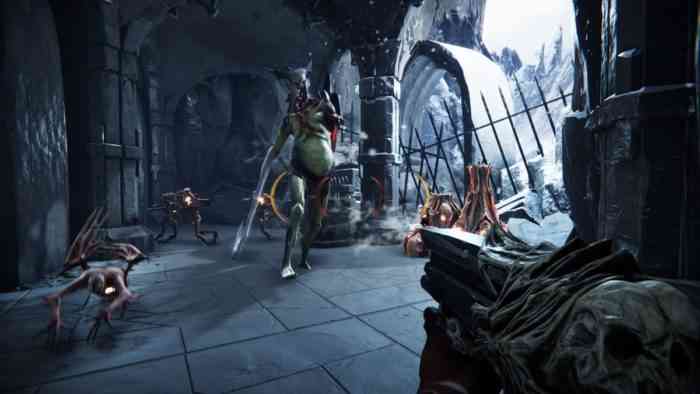 Metal: Hellsinger‘s story will be narrated by the infamous Troy Baker who recently played a big role in The Last of Us Part II. This rhythm FPS focuses on The Unknown, a demon and human hybrid who fights through literal Hell with a variety of weapons to defeat The Red Judge. Beyond the story mode, Metal: Hellsinger will feature a challenge mode for gamers to master. The game is being made by metalheads for metalheads so if you’re a fan of the genre of music, it might be right up your ally.

Metal: Hellsinger is being directed by David Goldfarb who has worked on popular games Pay Day 2 and Battlefield: Bad Company 2, bringing FPS expertise to a new rhythm hybrid. Gamers will sync their FPS gameplay to the beat of metal music in an extreme twist on the Crypt of the NecroDancer formula perfected with Cadence of Hyrule. The game will include vocal performances from well-known metal bands such as Trivium, Dark Tranquility, Arch Enemy and Soilwork. Matt Heafy, Mikael Stanne, Björn Strid and Alissa White-Gluz are all signed up to lend their vocals to the game.

Will you be getting Metal: Hellsinger on next-gen or current generation consoles? Let us know in the comments below!