There is one brand name that is synonymous with gaming headsets and that is Turtle Beach. Over the years, Turtle Beach has been constantly pushing the bar by bringing gamers some of the best headsets money can buy. This is why I was very excited to try out their latest premium set of cans, the Elite Atlas Aero Gaming Headset. With just a boatload of features, I was anticipating nothing but pure bliss for my ears. In the end, I was mostly satisfied. Mostly.

Unboxing the Elite Atlas Aero Gaming Headset was a treat in and of itself. This set of cans is absolutely gorgeous. The monochromatic look just screams badass. Mostly black with just a hint of grey separating the hardware from the comfy ear cushions. And damn, those ear cushions are very comfy. While I would have preferred if they were just a smidge bigger, to fully encompass my ears – I imagine for most gamers, especially younger gamers, they’ll fully enclose the ear. The headband is metal, so and everything else is a very firm hard plastic – clearly this headset was built to last. Another cool feature is the collapsable earcup design, which makes storage – or just wearing them around your neck like a champ – very convenient. The overall design is very impressive – and one of the best looking I’ve had the pleasure of using. I did feel a bit of fatigue after using them for a lengthy game session – they are a bit heavier than most headsets. 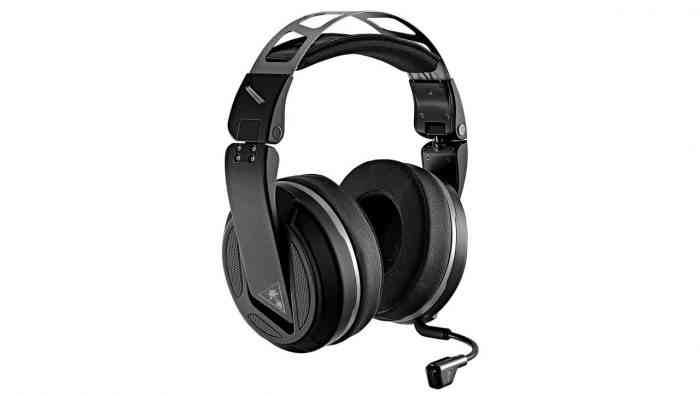 Comfortable design is one thing, but the most important aspect of any headset is the sound – and the Elite Atlas Aero Gaming Headset definitely delivers. I used the headset on my PC and my Xbox One X for both gaming and listening to music. In both cases, the sound was excellent. You truly get a full 3D audio. While playing Call of Duty: Black Ops 4, there were numerous occasions when I noticed things I hadn’t noticed before with other headsets or my normal home theatre surround sound. It’s the little details, little ambient sound effects that are scattered throughout maps to add realism, but usually, get lost in the fray of battle – they were so much more apparent using this headset. I vividly recall a time I was holding down a location, and heard the impending sound of footsteps – I knew exactly where to turn to blast my opponent away. It’s not like other headsets didn’t produce the footsteps, it’s just the clarity and positioning were so spot on that it helped me play that much better. On a related note, when I spoke with my team members via Party Chat – they all acknowledged just how crystal clear I sounded, a critical feature for strategizing with your team. My only criticism with the sound was the bass seemed to lack some of the punch I really love hearing in other headsets. I really want to feel those booming explosions, and I just didn’t quite get that here.

The Elite Atlas Aero Gaming Headset looks amazing and sounds amazing – but how about some of the other features? For one, the headset has onboard game volume, voice volume, and mute controls – but to my disappointment, these did not work when I used them on my Xbox One X. They worked on PC, and ultimately this is branded primarily as a PC gaming headset, so it makes sense that some of the features might not work on game consoles. The Elite Atlas Aero will work as a passive/wired headset with the Xbox One using the included cord which has a volume control switch attached. The battery life is advertised at 30 hours, but I really couldn’t accurately test them. I will say they definitely lasted over 10 hours, so take that for what it’s worth. One feature that I was really impressed with was the inclusion of their ProSpecs Glasses Relief System, which is designed to accommodate gamers who wear glasses. So, whether you wear glasses to see or you wear sunglass to portray a “cool” streamer vibe – the ProSpecs Glasses Relief System has you covered.

I really liked the Elite Atlas Aero Gaming Headset. My biggest disappointment was that the headset’s features didn’t work very well beyond PC gaming. While it is marketed as a PC gaming headset, it would have been great to get more mileage out of it on gaming consoles – just because it is otherwise designed so well. The headsets sound is amazing, but I just wish the bass added a little bit more punch. The overall headset design is amazing and I love the metallic headband, even if it does add a bit more weight to the final product. This is a solid effort from Turtle Beach and if you’re a PC gamer that needs amazing 3D sound, this set of cans will do the trick.