Spelunky 2 Release Date for PC Has Been Dug Up

Last month’s State of Play revealed a lot. We all got a pretty good look at the follow up to 2012’s revamped Spelunky in a gameplay trailer from the creator Derek Yu. Being a Sony event, we only got the PS4’s Spelunky 2 release date, leaving PC users in the dark with a “coming soon” message. Thankfully, “soon” actually is pretty soon. Yesterday, Mossmouth announced that Spelunky 2 would be hitting Steam just a couple of weeks after it launches on PS4. It was originally meant to release in 2017, but things happen and it was delayed a bunch of times. 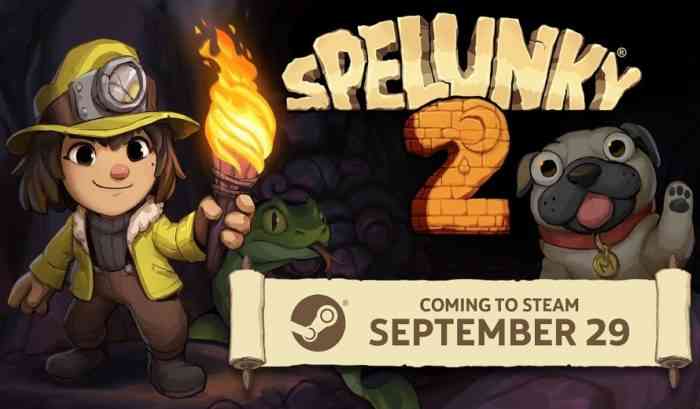 Spelunky 2’s release date on PS4 is on September 15th and in a post on Twitter, Mossmouth announced that the game’s Steam launch would follow on September 29th. You can add it to your Steam wishlist now in case it gets buried by any other upcoming releases and it’ll resurface at just the right time. If you check out the State of Play trailer you can see exactly where Spelunky 2 has expanded itself over the first game, which is pretty much everywhere. Everything from shops, characters, the hub community has been improved for a deeper experience.

PC users will have to wait just a couple of weeks after Spelunky 2 comes out on PS4, so count yourselves lucky as there does not appear to be any other platforms announced to support the game. Sorry, Xbox One and Nintendo Switch. Spelunky 2 will be out on PC and PS4 on September 29th and 15th, respectively.

Which platform will you be spelunking on? Let us know in the comments below.