Unlock the Power of Sith With Vader Immortal VR

During PlayStation’s recent State of Play event, Lucasfilm’s ILMxLAB and developer Black Shamrock showed off an upcoming Star Wars VR title. PlayStation VR and Star Wars fans will be able to fulfill their dreams of being Lord Vader when Vader Immortal: A Star Wars VR Series is released. The reveal trailer showed off combat elements, various Darth Vader abilities, a variety of enemies and some impressive VR visuals. Vader Immortal: A Star Wars VR Series will be releasing for PSVR unexpectedly soon on August 25th. 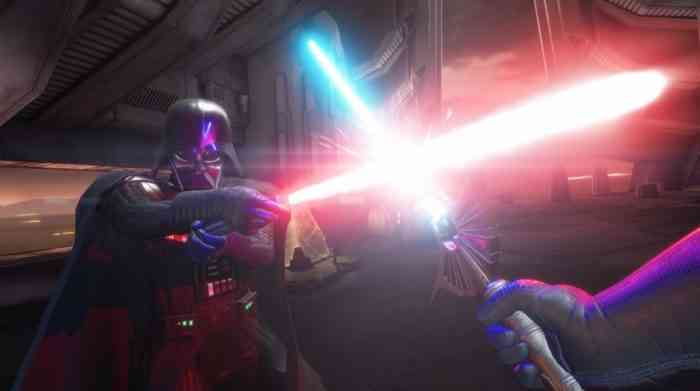 Lord Vader is known for crushing his enemies utilizing his strong grasp of the force and slicing his opposition down with his iconic red lightsaber and now PSVR gamers will be able to emulate all of this and more. Darth Vader fans will explore Vader’s fortress, Mustafar while discovering the secrets of the planet and the lair itself. The trailer showed off a few abilities that PSVR fans will be able to utilize in combat, showing what battle with and other aliens from the Star Wars universe. It also teases dual-wielding lightsabers and force lightning.

“Vader Immortal holds a very special place in our hearts at ILMxLAB and we are very excited to be bringing this to PlayStation VR,” said ILMxLAB’s Harvey Whitney on a recent PlayStation Blog. “This allows even more fans to experience the first Star Wars story designed exclusively for virtual reality… Being featured on the State of Play allows us the opportunity to show some never-before-seen concept art that helped guide the direction of the final experience. There’s so much that goes on behind the scenes in creating digital content and it’s nice to be able to show the work that helps inspire the final vision.”

Will you be melting your enemies with force lightning or cutting through them with Vader’s iconic red lightsaber in Vadar Immortal: A Star Wars VR Series? Let us know in the comments below!

A New Kena: Bridge of Spirits Release Date Trailer Is Up

Final Fantasy VII Remake: Intergrade Announced at PlayStation State of Play
Next
Transport Yourself To Valhalla with This New Assassin’s Creed EP
Previous
State of Play Confirms Spelunky 2 Comes out Next Month