Who Says Riots Can’t Be Productive?

We are hearing a lot from video game publishers and developers speaking out against racism and systemic racial injustices lately. While that is all well and good, just addressing those issues do not solve it, nor does it show much initiative to make change. However, there are a few who are taking this opportunity to do a little bit more. Yesterday, Riot Games made a statement like many other developers before them, but did something pretty refreshing. They actually mentioned an “Action Plan” for putting their money where their mouth is. 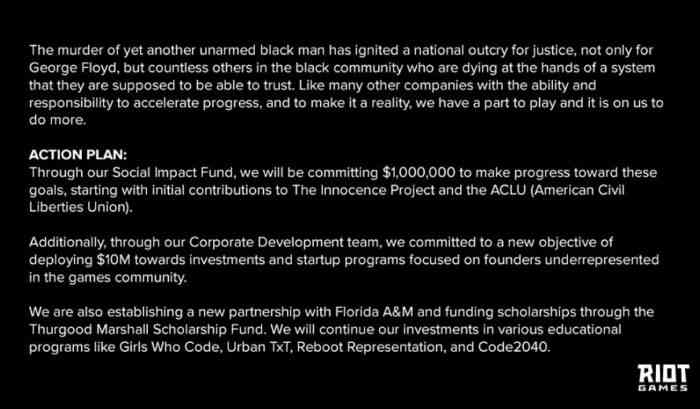 Riot Games’ president Dylan Jadeja announced that they will be donating one million dollars to The Innocence Project (a foundation committed to exonerating wrongful convictions) and the ACLU (American Civil Liberties Union). Their Corporate Development team will also be taking on a new project, whose goal is to inject ten million dollars into “investments and startup programs focused on founders underrepresented in the games community.” They will also be starting a new partnership Florida A&M, a historically Black university, by funding scholarships.

A note from Riot’s President Dylan Jadeja on the commitment to drive change. https://t.co/DdBaub6oyz pic.twitter.com/pMnjdGl6du

Not only is this announcement refreshing from the games industry, but Riot Games’ more recent stint in the public eye has been less than flattering, so if they are turning a corner for the better then that is also good news. This announcement also comes on the heels of Riot Games’ new free-to-play FPS Valorant, which has just left beta.

What are the more inspiring messages you have heard from publishers and developers lately? Let us know in the comments below.

League of Legends Microtransaction Prices Will Go Up Worldwide
Next
Tropical Paradise: Fortnite Season 3 May be Filled With Water, Islands, and Boats
Previous
Madden 21 on Xbox One Can Be Upgraded to Next Gen Until Next Year