Blizzard recently added Ashe’s Mardi Gras Challenge to Overwatch, accompanied by a cool new legendary skin for gamers to grind towards. From now until March 9th, winning Overwatch matches in Quick Play, Competitive Play and Arcade will help gamers unlock new sprays, player icons and the aforementioned event-themed skin. Gamers will also get the usual rewards for completing non-event challenges and can access more rewards by watching on Twitch like previous events. The event is live for Overwatch which is available now for PC, Xbox One, PS4 and Nintendo Switch. 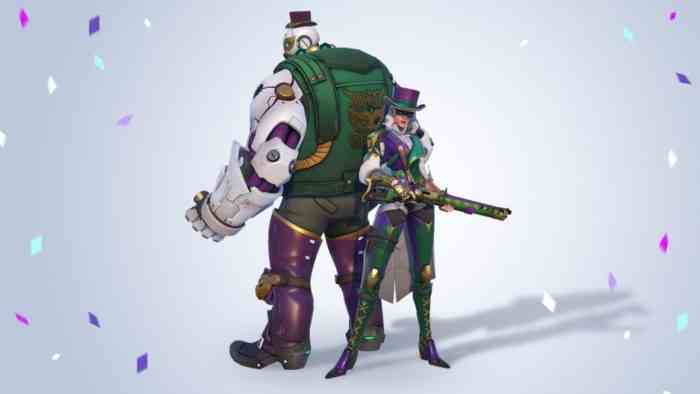 Regular weekly rewards give Overwatch gamers access to loot boxes, which include randomized content for their roster of characters. Ashe’s Mardi Gras Challenge, on the other hand, provide gamers a tangible progression system and more content to work towards while they grind out their regular weeklies. Like previous events, less impressive rewards are given by winning a handful of matches, but gamers will have to win nine games in total to receive the festive event-themed Mardi Gras skin for Ashe.

Winning three games will earn gamers the Mardi Grashe and Mardi B.O.B. Player Icons, while winning six matches will earn them a Gold Mask Spray. To get what you truly covet in this event, it’ll be necessary to win nine games for the cool new skin, just as it was for the Bastion Brick Challenge in order to gain the Lego themed Bastion legendary. Gamers who watch Twitch streamers during the event can earn them up to six unique Ashe’s Mardi Gras Challenge sprays and ideally, they’ll be able to unlock all of the content before the calendar reaches March 9th.

Will you be participating in Ashe’s Mardi Gras Challenge? Which Overwatch challenge was your favorite so far? Let us know in the comments below!