Mercy’s Recall is a Challenge Centered Around Mercy

Just like other characters in Overwatch this year such as Bastion and Baptiste, Mercy is getting a challenge centered around her for a limited time known as Mercy’s Recall. Mercy’s Recall Challenge runs from November 12th to December 2nd and gamers will be able to unlock a variety of rewards such as icons, sprays and a free Legendary Dr. Angela Ziegler skin if they participate in the challenge. Overwatch is available on PC, Xbox One, PS4 and, most recently, the Nintendo Switch. 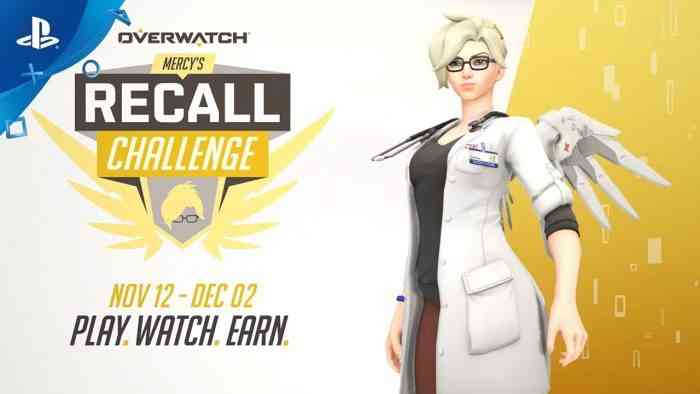 Gamers will have to win some games to acquire the new Mercy gear, requiring them to get three wins for a player icon. Six wins unlocks two free sprays of Dr. Ziegler. Finally, nine wins gets gamers the coveted Legendary skin which calls back to Mercy’s humanitarian role before returning to Overwatch. Winning matches in Quickplay, Arcade and Competitive will count towards a gamers progress in the challenge, allowing them to swap between modes at their leisure. Because this is a limited-time event, we recommend gamers unlock these cosmetic items sooner rather than later.

While gamers are now well aware of the upcoming Overwatch 2, it’s worth while to grind out these character challenges because cosmetics unlocked through Overwatch will apparently be available in the sequel. In exchange, Overwatch 2 will share its characters and maps with the original title. This means that if you work hard and unlock this Mercy skin, that skin will carry forward assuming Mercy is a playable character in the sequel. The sprays and player icon are nice and all but we’re really excited to unlock the Legendary Dr. Angela Ziegler skin after nine wins.

Who’s your favorite Overwatch character and do you hope they get challenges like Mercy and Bastion? Are you excited to transfer your skins and sprays to Overwatch 2 or are you sticking with the original? Let us know in the comments below!