Developer Mojang revealed new details about Minecraft Dungeons at XO19, showing off four player co-op and a release month of April 2020. Mojang’s dungeon crawler inspired by Minecraft was expected in Spring and now gamers can expect the title in April sometime. While no official release date was announced, Mojang recommended gamers check out their website for a chance to play first. When it releases in April, Minecraft Dungeons will be available for the Nintendo Switch, PS4, PC, Xbox One and it will be part of the Xbox and PC Game Pass lineup. 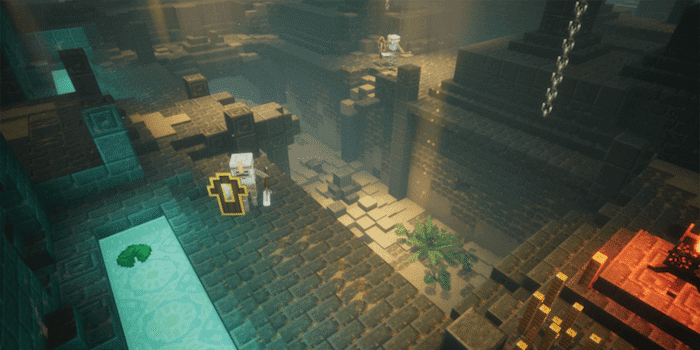 Though Minecraft Dungeons didn’t receive a ton of attention at XO19, some brief four player co-op gameplay was shown off on stage with the host of the Mojang panel even taking part. Apparently, gamers don’t choose a class in this Mojang dungeon crawler, rather the equipment they select dictates their play style. The panel discovered a variety of items to equip and solved a “rare” puzzle to access a treasure trove full of loot. Gamers will be able to use enchantments on weapons to further power up the equipment. The procedurally generated dungeon the team played through included a swarm of cows hiding among the skeletal army attacking them which showed off the humorous random nature of the game.

There are artifacts gamers will come across as they delve deep into the procedurally generated dungeons that act like skills that fill an action bar in titles such as Diablo and Torchlight, making us think that skills will be constantly swapped rather than set once we find a nice rotation. We like the idea of gear dictating what class you play as but because of the random nature of the game, you might not always get to play the class you want to play right away, forcing you to adapt your play style around your gear.

Are you excited to try Minecraft Dungeons in April or do you play Minecraft for the building and crafting? Which class do you typically prefer when playing a dungeon crawler? Let us know in the comments below!