The developer behind Shovel Knight, Yacht Club Games, recently made a big announcement for Shovel Knight, adding a treasure chest of additional content to the existing game as well as an all new spin-off title called Shovel Knight Dig. Shovel Knight Showdown will add smash-like multiplayer to the game, creating hectic platforming battles and allowing gamers to unlock new characters as they overcome their challengers. Shovel Knight: King of Cards is the final expansion for the game and features a card battle system. Showdown and King of Cards release in December on Xbox One, PS4, Nintendo Switch, PC, PS Vita, 3DS, Wii U and Amazon FireTV while Dig is currently only slated for the Switch without a firm release date. 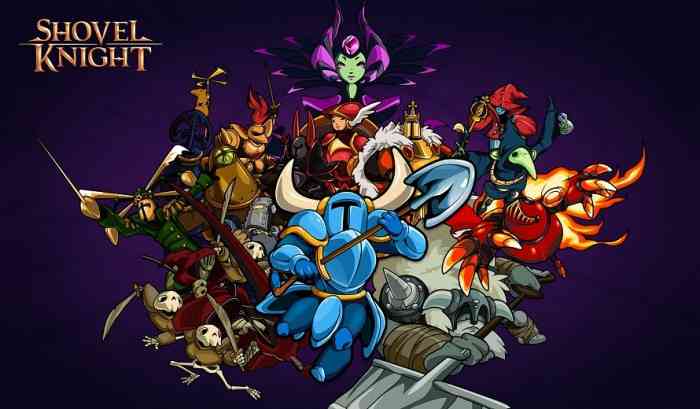 Shovel Knight Showdown will feature a number of game modes in the multiplayer mayhem such as Fairy Frenzy, Hyper Brawl, Fight of Fate and One Hit KO. These modes will provide more variety to the multiplayer experience as one mode has gamers collecting gems and another has them more vulnerable to death than usual. Different maps also change up the gameplay as some feature more stage hazards than others.

Shovel Knight: King of Cards has players take on the role of the graceful and golden King of Cards who has his own unique moves and shape and he’s equipped with a royal scepter rather than a shovel. Compete in collectible card games similar to Tetra Master battles from Final Fantasy IX as monster cards face off against character cards. The King of Cards expansion includes new content with new levels and mechanics for gamers to discover and is apparently the biggest Shovel Knight expansion to date.

Yacht Club games and flash game developer Nitrome draw inspiration from Spelunky and SteamWorld Dig with Shovel Knight Dig which has gamers dig down endlessly to defeat the main boss: Drill Knight. The new story is unique every time as proprietary generation techniques allow for infinite replayability. Because of the reliance on digging, one of the new mechanics added to Dig is Speed Shovel mechanics, allowing gamers to dig through the depths of the earth faster. Dig features the familiar look and sound of the other titles in the franchise while providing new knights, characters and enemies.

Are you excited to challenge your friends to multiplayer battle in Showdown or are you looking forward to the more traditional expansion experience that King of Cards will provide? Does Dig look like a natural progression of the franchise to you or were you hoping for something different? Let us know in the comments below!