The creators of beloved indie-hit Shovel Knight, Yacht Club Games, are set to show off a brand new title they’re not developing, but publishing, at this month’s PAX East. 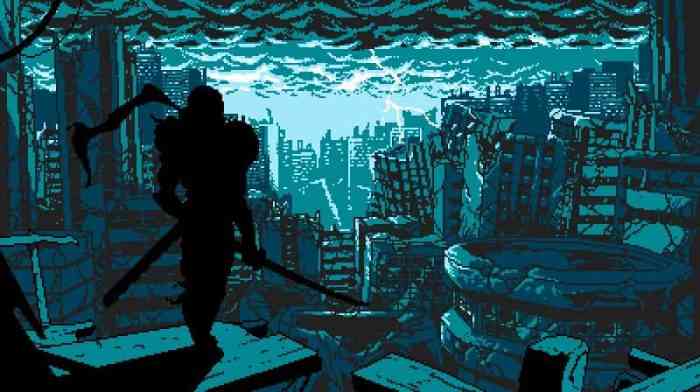 The announcement was revealed in a press release earlier today that reads thus:

PAX East is upon us!

2019 is shaping up to be a landmark year for the Shovel Knight franchise as Shovel Knight: Treasure Trove will be fully complete. The promises from our 2013 Kickstarter are finally being fulfilled! Playable demos of the latest titles in the series – due out later this year – will be on display at PAX:

But… wait… from the shadows… there’s something completely different in store:

You’ll definitely want to catch a glimpse and get a hands-on of this all-new addition to the Yacht Club Games Publisher catalog!

The image above is what followed the colon in the email, so it’s probably safe to assume the title revolves around ninjas in a post-apocalyptic world full of lightning.

Yacht Club will also be showing off the final additions to Shovel Knight at PAX East, which include the King Knight’s “King of Cards” campaign, and the Showdown multiplayer mode. The event is only two weeks away and the hype is definitely brewing, with Gearbox teasing a new Borderlands reveal and…soooommmmeethiiiingg. Let us know what you think in the comments!

Fight’N Rage Review – Fightin’ ‘Round the World
Next
Windjammers 2 Gets Wind Jammin’ in New Gameplay Trailer
Previous
Do We Smell a Cyberpunk 2077 Collaboration with Lady Gaga?