Peeling Back the Curtain to Show off the Inner Workings

Shovel Knight is an ultra-popular 2D sidescrolling platformer by Yacht Club Games. Well, it looks 2D, but it actually runs in a 3D engine. This revelation and more is shown to us gamers in episode 109 of the YouTube show Boundary Break by Shesez. Late last year, the show gave us a closer look at Fallout 3, but a couple of days ago, we got a behind the scenes view of the 2014 favourite Shovel Knight. What makes this episode special is the assistance from Yacht Club Games themselves. Often when odd things are found, Shesez has to speculate as to why it is there, but now he has some answers to his questions. 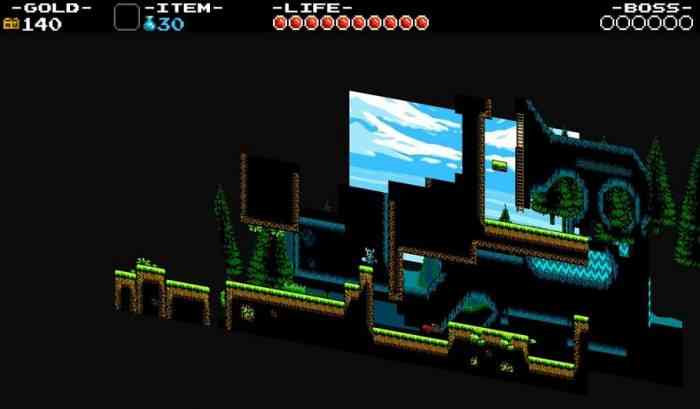 So, the biggest surprise found in Shovel Knight was the 3D engine. In most 2D sidescrollers, all the sprites are layered over each other. In Shovel Knight, a lot of the sprites operate on their own zones; background, foreground, etc. This helps with hiding some elements such as extending platforms or enemies. Shesez shows off an platform extending from a wall that seems to “stack like a deck of cards” when retracted.

Boundary Break also took a look at things requested by fans. One of which was the Troupple King dance where he and a dozen other fish perform for the Knight. Although only about a dozen fish are on screen at any given time, there are actually about 60 individual sprites hiding just behind the water sprite, waiting for their turn. There are also parts of the game where the player moves vertically for a portion of a level. While some may assume that the camera scrolls up to follow the Knight, it is revealed that the sprite is warped to the bottom of the level after a certain distance. If that’s difficult to imagine, check out the episode and see it for yourself, and check out the other discoveries.

What game would you like to see on Boundary Break? Let us know in the comments below.


Shovel Knight: King of Cards Review – A Conclusion Fit For A King