If you’ve never played Full Throttle, now is a better time than ever thanks to the release of Full Throttle Remastered for PlayStation 4 and Windows PC. An update to the classic point-and-click graphic adventure from the brilliant Tim Schafer (Grim Fandango, Psychonauts) and LucasArts, it not only received a new coat of HD paint it also received some significant improvements to audio. 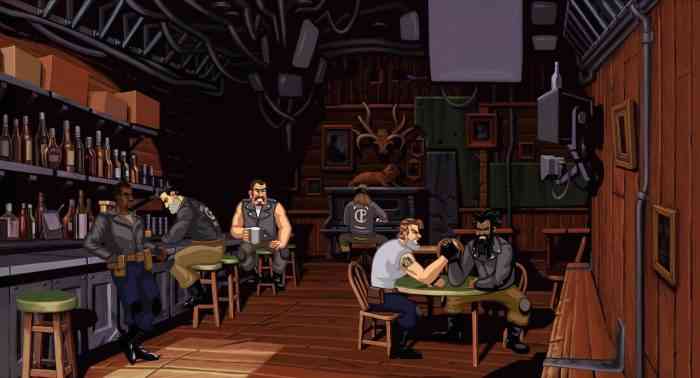 Watch as we play the opening 37 minutes of Full Throttle Remastered below. You’ll be seeing solutions to the game’s early puzzles so if spoilers of a nearly 25 year old game are a concern for you, look away now. To everyone else, enjoy the gameplay. Full Throttle Remastered is still just as entertaining of an adventure today as it was in 1995 thanks to some fantastic voice work from the lead cast which includes Mark Hamill as the big bad.

Alex had this to say in our official review of the game: “Full Throttle Remastered is the perfect opportunity for gamers who missed out on the original to play this piece of gaming history. In my opinion, Full Throttle is one of the best point and click adventure games ever made. While some of the gameplay might feel dated to younger gamers, and the short length might turn a few people off – for everyone else looking for a fun adventure that’ll take no more than a rainy afternoon to play through, Full Throttle Remastered is an easy choice. It’s unlikely we’ll ever see a true Full Throttle sequel as Tim Schafer recently said that he felt the Full Throttle story was “complete” and unfortunately, Roy Conrad, who was the (irreplaceable) voice of protagonist Ben, died in 2002. So, for the time being, we’ll just have to settle for this brilliant remaster that gives us a fans a complete version of this amazing game.”