Beat ‘em up games must have fantastic gameplay to balance the repetitiveness that is its core, but Zheros sits hard on the latter and manages to break the see-saw before the first level is even over. I came into this game expecting a fun celebration of the genre and left with a headache when I could not stomach one more identical encounter in a hallway wearing a slightly different skin. On top of that the shoddy platforming in this beat ‘em up aggravated me to no end.

In Zheros, you play as either the lithe Captain Dorian or the buff Mike, which despite their radically different appearances have the exact same play style. Now, a good aspect of the game is the fact that it doesn’t take itself seriously — it is proudly cartoonish to the point where it is unimaginative instead of a light-hearted elbow towards the genre. You are stopping the nefarious plans of the evil Dr. Vendetta, who is bent on destroying the world, and when you aren’t fighting the same small white robots, you are fighting enemies such as “Fang”, a dog-like enemy, and “Space Cow”, a cow… in a spacesuit. With such a minimal story, this means the only aspect of the game carrying you forward to see it through is the gameplay, which grows tedious fast.

“…it is proudly cartoonish to the point where it is unimaginative instead of a light-hearted elbow towards the genre.”

For beat ‘em up games, their bread and butter is how satisfying it is to run through mobs of enemies and dispatch them, but Zheros’ gameplay increasingly gives way from satisfying to boring as you pass through one shiny hallway after another. Zheros is mind-numbingly linear, with long levels that begin to drag half-way through. Some limited time power-ups mix up the battles a little and the game is generous with health and points, but it does not double the amount on the field if two players are in action. There was some variation in the enemies, which could either be absently-mindedly swatted away or be too difficult to even hit. The game also favours the annoying video game logic that the lasers, explosives, and acid only harm you, and not your enemies. My strategy of kicking an explosive dropped by a self-explanatory Bomber enemy towards a group of white robots was quickly eliminated, much to my disappointment. I suppose there is something that could be said of using the power-suits sporadically provided to you by the game — it is immensely satisfying bulldozing your way through the same hordes of enemies that would have taken you far longer to defeat by hand, only because you know that you are experiencing a far shorter version of this tedious process. 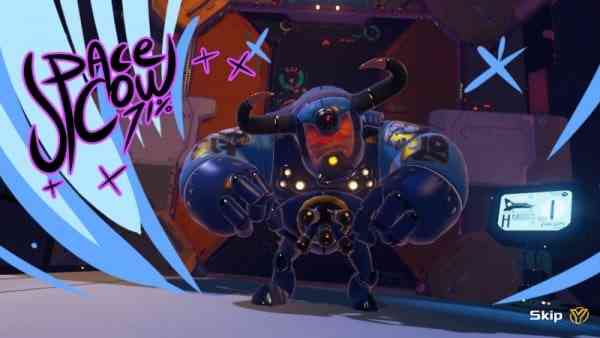 This is not a complicated game; the controls are very easy to pick up, and combos are further unlocked and fun when you successfully execute them. Evading, blocking, and a sidearm for long distance damage adds variety amongst the standard punches and kicks. However, the game seemed to be actively fighting against its own momentum as it presents to the player the same encounter of identical robots in its seemingly endless hallways. The two playable stereotypes differed only in animation and design, which only highlighted how boring the brawling really was. The platforming in Zheros could use a lot of work, as characters jump straight up and fall like a bag of bricks. And of course, the introductory level to this game’s platforming is timed, with moving platforms, and you must run and jump onto moving targets over an enormous pit of green acid. The odd placement of checkpoints only worsened my frustration, as I would have to fight groups of enemies for the privilege of dying in the acid once again. For the most part, the enemies were not difficult, except for one annoying flying robot, in which you had to reflect its laser beams back at it with a split-second margin for error. There is local co-op in Zheros, in which either of the two players can be Mike or Dorian. Co-op mode definitely livens up the game, as it is pretty empty with just one protagonist on screen. But while getting through the laser and platforming sections are tough with just one player, it is downright brutal with two.

“The music in Zheros is an upbeat, light dubstep, very suitable for what it is, but in the end it is only one song on repeat, an apt summary of the entire game.”

Visually, the game is stunning with a wide range of contrasting colours and no shortage of bright, blinky lights, but this already stark game is somehow bogged down by a painfully obvious low framerate. The hallways are slick and the animation is fluid and lively, with great over-the-top character and enemy design. Zheros is cartoonish and the game knows it — it fully accepts its identity and revels in it, to the point where its jokes fall flat. In the opening cutscene, the “Send Army” button next to the “Send More Army” button should have warned me of the game’s “humour” from the beginning, as its attempts to make fun of its own genre’s clichés only caused it to embody them. The music in Zheros is an upbeat, light dubstep, very suitable for what it is, but in the end it is only one song on repeat, an apt summary of the entire game. The sound effects are acceptable alongside very minimal voice acting — only a handful of efforts for each character seem to have been recorded, and neither make a sound when struck by lasers or head-butted by a Space Cow.

While this could have been an incredible new entry in its genre, Zheros falls flat with its bare facsimile of a story, its bland gameplay, and monotonous level design. This is a very pretty game that tries to pay homage to the beat ‘em ups of the past, but Zheros only shows itself to be very outdated and simplistic, and cannot possibly keep up with the games out today. 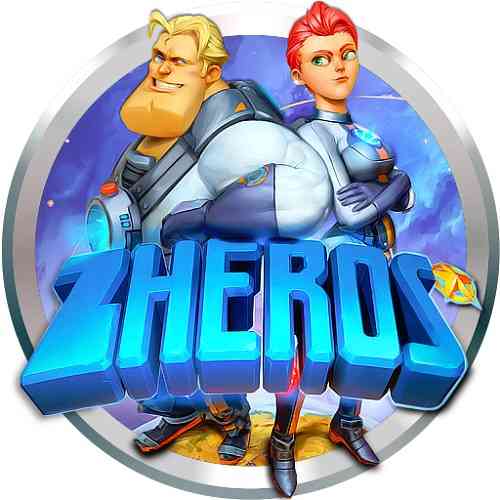