If you’ve had the fever for a great tycoon game in the vein of those 90s classics – especially Theme Hospital – then Two Point Studios has the cure. Taking all the best aspects of past titles and somehow making them even better, Two Point Hospital is a true delight that will have you building and running your very own health care empire – and loving every last hilarious minute of it.

Just like its retro forebears, Two Point Hospital sucks you in right from the start, and you’ll log in hours of playtime before you even realize it. The beginning Tutorial is blended into the game seamlessly, starting you off at the beginning – building a Reception Desk and a single GP’s (Doctor’s) Office. Of course, you’ll need employees to occupy them, and benches for waiting patients. Medicine needs a special Pharmacy room to be dispensed, along with Nurses to run it. And don’t let your patients get bored while they’re waiting; water fountains, posters, and snack machines as well as lots of other things will need to be placed in the right locations to make sure everyone’s visit to your facility is a pleasant and stress-free experience.

Doctor In The House

And that last phrase really sums up playing Two Point Hospital nicely. Everything is so well designed and intuitive that learning and mastering the game is a breeze. Placing new rooms is as simple as dragging and clicking on the grid-patterned hospital floor, after which a “poof” indicates that your new office or laboratory or ward is ready to go. Click on a room and options pop up to add furniture and decorations, such as desks and filing cabinets. Along the way, helpful hints and tips appear to let you know what you still need to do and how everything is going. If you’ve played Theme Hospital, Roller Coaster Tycoon or other tycoon games, you’ll pick up Two Point Hospital like second nature, but even if you haven’t this is a game that’s instantly accessible.

The developers, some of whom worked on original Theme Hospital back in 1997, infuse the masterful game design with a gleeful, cheeky sardonic humor that just oozes from every pore of Two Point Hospital. Some patients come in feeling “light-headed,” indicated by them having actual light bulbs instead of heads. Others suffer from “Grey Anatomy” and need to have their color restored. Even the PA system periodically makes ironic and funny announcements, such as a friendly request that patients please refrain from dying in the hallways. Oh, and in this hospital, patients will die a lot – sometimes from waiting too long – after which they’ll turn into ghosts (which will require a janitor experienced in ghost-busting, naturally). Underneath the almost cartoonish visual presentation, Two Point Hospital packs an at-times sharp satirical edge that I always found delightful. 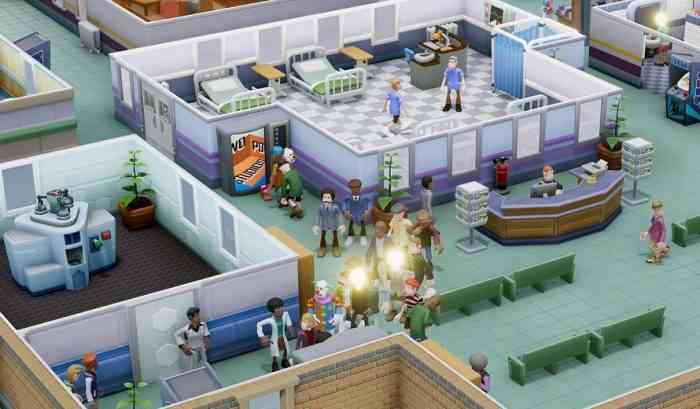 I loved the way Two Point Hospital slowly expanded in scope and complexity, growing with me as I gained experience as a budding Hospital Administrator. After the first, small hospital, you are assigned larger, busier ones across the fictional Two Point County which present new and tougher challenges. Employees, once they’ve worked with you for a while, will also demand closer attention and desire things like pay raises and promotions. In all honesty, it’s at this point that the game loses some of its relaxing appeal, and I must say I wearied at times of having to micro-manage every single employee – the addition of a Payroll Clerk would have been perfect to take some of the more mundane tasks off my hands.

This Game Is Sick

If there is a downside to Two Point Hospital, it’s that you are spending a fair bit of your playtime waiting, watching or just making minor tweaks while the game to a great extent plays on without your direct involvement. However, this is an aspect common to all tycoon games, and Two Point Hospital at least makes an effort to add twists and random events to keep you involved. For example, Pandemics might break out, requiring you to scramble and deal with the threat; or a Health Inspector might decide to pay you a visit, and put all of your hard work under an unforgiving microscope. There may have been times when I was not actively playing but I wouldn’t say I was ever bored.

Two Point Hospital is a darkly humorous, fun and addictive game worthy to be called a true successor to Theme Hospital and the greatest of the classic tycoon titles of the past. Developers Two Point Studios know what they’re doing and it shows in the balance of near-perfect game design and biting satire. This game will suck many hours of your life from you before you know it, but along the way, it will also deliver a healthy dose of fun and laughter. 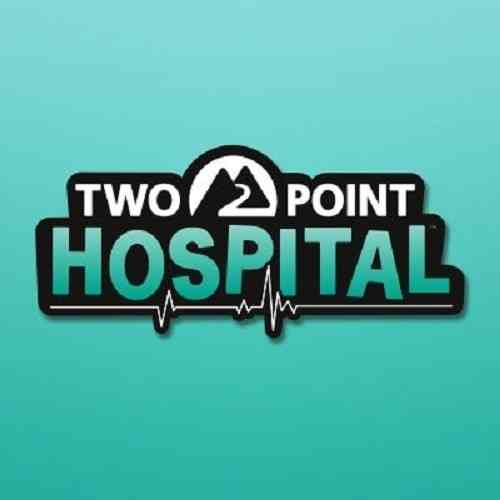