The point-and-click adventure game is a classic genre, gaining steam in the olden days of gaming with companies like LucasArts leading the charge. It’s become a bit of a retro act in recent years as Telltale’s narrative style usurped the throne of “best story-heavy game format,” but The Low Road doesn’t care. It’s bringing the old point-and-click to the Nintendo Switch for better and for worse and well…I admire the effort, I’ll say that much.

The Low Road follows Noomi Kovacs, a new spy fresh out of school. She yearns to work as a field agent but instead finds herself doing busy work behind a desk. Her first task is trying to extract information from a woman on the phone. This situation serves as my first puzzle in the game: using a few document’s worths of information I have to choose dialogue options. If I select the correct ones I get the juiciest bits of information. If I don’t, the conversation ends.

This puzzle, I soon discover, is a double-edged sword for The Low Road. It’s a super cool way to start the game, an important conversation where one bad conversation piece leads to failure. On the other hand, it’s the best puzzle in the game and it’s the first one I see. The puzzle writes a check that the rest of the game simply can’t cash.

One thing The Low Road does have going for it is its writing, as both the story and the characters that star in it are very entertaining. There is plenty of personality in this adventure, from Hab the older fellow who only speaks in rhyme to Turn, Noomi’s boss and co-protagonist in the adventure. Following Noomi’s back-handed attempts to earn a spot in the field is entertaining through the 3-4 hour adventure, definitely giving me a LucasArts vibe. 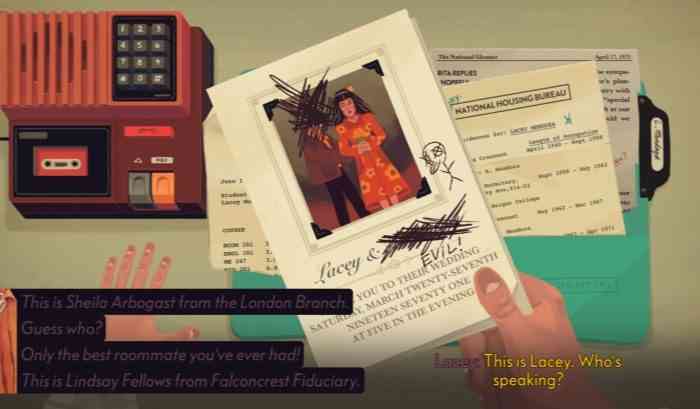 This Low Road needs some paving…

Unfortunately, that story has no chance of redeeming The Low Road’s clunky controls. I hate to say it, but if this is the future of Switch point-and-click adventures I worry about future games. The best way to navigate the game, I’ve found, is to walk toward a set of objects then use the left joystick to move the cursor to the item before clicking. If that object isn’t what I need literally nothing happens, whereas my intended target will show a graphic of how I need to use an item to interact with it.

The most baffling choice in this game, by far, is the total lack of touch controls. Point-and-clicks are tailor-made for touch controls, every interactive object in the world could be selected with a simple press with my finge. The Low Road somehow didn’t get the memo. Instead, I have to awkwardly approach an item, cycle through until the cursor hits where I want it to hit, and then I can proceed. 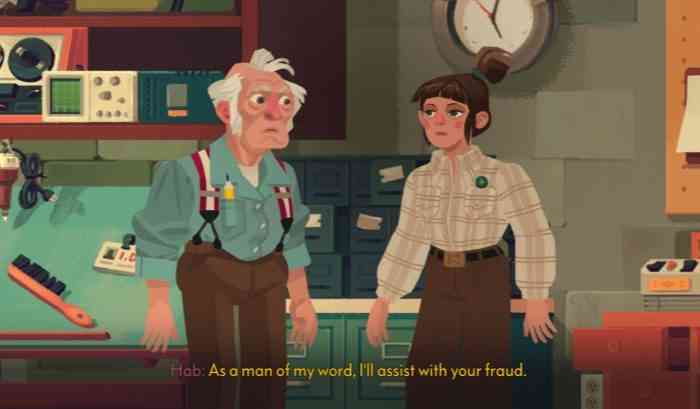 …but it’s not all rocky riding on The Low Road

The controls aren’t entirely subpar though, as they work great in first-person puzzles like the first one. All I have to do is move a hand to an object, hold the shoulder button, and I grab it. I can then move it to another place or bring it closer to the screen. The second puzzle of the game shows this off, as I have to pickpocket a guy named Horace for his keycard.

My objective is to switch my fake keycard with his real one, but there are other objects in the way. If any of those objects touch each other or the edges of the pockets a meter starts to fill. A full meter means a failed pickpocket and I have to start over again. This is a nifty set piece, as dragging items into strategic places adds a little trial-and-error. Ultimately the puzzle was quickly solved and I was back to clunkiness, but the first-person puzzles are a bright spot.

The Low Road tells a wonderful story in a really clumsy way. Its point-and-click controls are very much lost in translation between the PC and the Switch. Touch controls would have solved the problem in a big wat and tell that story more easily. Alas no such controls exist, and the game suffers as a result. It’s not all bad though, as there are some interesting puzzles and story twists that kept me engaged. Only the most patient players should take the long haul down The Low Road. If nothing else this game might start the argument for keyboard/mouse support on Switch…nah, maybe not.

A PC code was provided by the publisher