Planet Alpha Review – An Out of This World Experience

I play many platforming games, and although I am terrible at landing in the right places and staying alive, there is a certain appeal to the challenge that I can’t quite put into words. When I first saw the trailer for Planet Alpha, I knew that I had to try it out. I thought to myself: “This game is going to be spectacular if it is anything close to the graphics in this trailer”. And, let’s just say I was pleasantly surprised because it was really just as good.

Developed by Planet Alpha ApS, Planet Alpha is the 100th game published by Team17 Digital Ltd, an excellent choice of a game for such a milestone. The visuals in Planet Alpha are absolutely stunning that I cannot stop playing it because it is just so beautiful. The game begins with our playable character being stranded on an unknown planet, injured and wandering alone in a seemingly deserted path. As a 2D side-scrolling platformer, we discover new areas with our character as he runs around finding places to go, as well as solving puzzles while evading enemies with laser beams, alien insects with toxic spray, and huge robots with massive claws. Soon, we discover that we can manipulate time, allowing plants to grow and giving us opportunities to hide and jump around.

The gameplay is very straightforward and the controls are incredibly easy to grasp. One of the things I really liked about Planet Alpha were the moments where you have to think outside the box. This game is not just about jumping from one platform to the other – there are many tricks that you will have to discover in order to proceed in the game. When I first started playing, I was stuck in one area for quite a while because I kept trying to platform and run through a field of enemies (which obviously failed). However, I looked around and realized that there were items within my reach that I could use to help me move forward. This sort of thinking allows players to engage more with the game, rather than just run, jump, and evade opponents like a normal platformer.

Visually, Planet Alpha was absolutely stunning. The colors were vibrant and the graphics were gorgeous. If Planet Alpha was released as a game where players just walked around to explore the land, that is already enough for me. Combined with creative platforming and puzzles, I was totally addicted to this game. With the ability of our character to control the time of day, the lighting changed seamlessly and plants grew and shrunk flawlessly. Admittedly, I spent a few minutes changing the scene from night to day just to watch the grass glow different colors.

When it comes to sound effects and music, I must say I was very impressed with the soundtrack. It sounded like one long instrumental piece that effortlessly looped and transitioned to the next song. Speaking of smooth transitions, the same could also be said about the transitioning between the different chapters of the game. There was no lag at all in terms of visuals and sounds, which is a major plus in a fast-paced platformer. 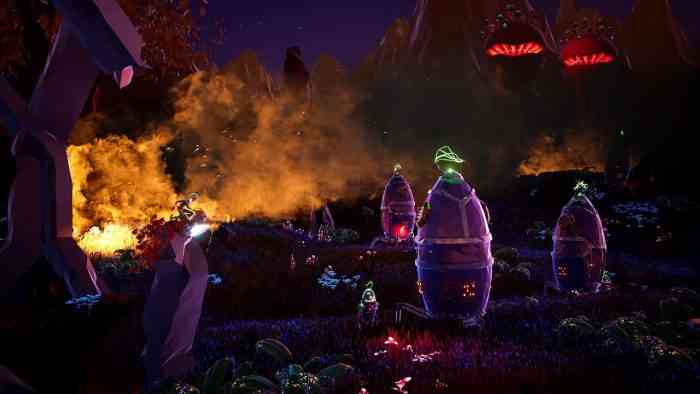 While there were a few glitches that were present at the beginning, these were fixed with the Day One patch. One of the minor issues I had with the game was the inability to tell where your path was at times. For example, because the layout of the game is not entirely 2D (there are a foreground and a background), I had to test a few times in a grass field to see where my path was. This was a disadvantage especially since the grass field was littered with evil robots wanting to kill me. Luckily, we do have autosave and the load time is barely noticeable, so being shot to death was really not as terrible as I would have thought. There were definitely frustrating moments in the game, but if you can’t get past a certain point, just remember that you are probably not doing what you’re supposed to be doing.

Overall, the game was impressive – the graphics, the visuals, the music, the sound effects, and the gameplay were out of this world. Planet Alpha is great for those who want a fun challenge, not because it is hard to land on platforms but because it requires your mind to think beyond that. I highly recommend all gamers to give Planet Alpha a try, and I highly doubt anyone will regret the experience.