As Sonic celebrates its historic anniversary, the folks over at Two Point Hospital have announced an epic crossover event. In this event, fans of both games will be able to enjoy costumes and items for free in Two Point Hospital. The items will be available on PlayStation, Xbox, PC and Nintendo Switch.

Players will be offered four different costumes for their staff, which will ensure they are working as fast as possible! The four available costumes are legendary characters in the Sonic universe including Amy, Knuckles, Tails and of course, Sonic himself. Furthermore, fans can have a cool, Sonic-themed hospital as a Sonic statue, decorative rugs and the iconic legendary Gold Ring will all be available. 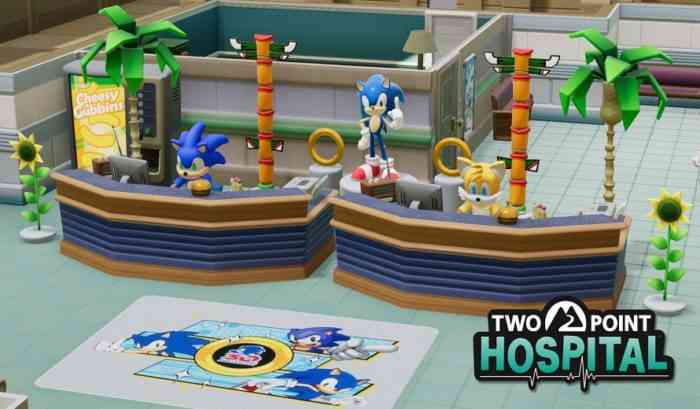 Two Point Hospital’s Studio Director Gary Carr was excited for the collaboration and stated, “For us, it’s a dream come true to fully bring the joy of Sonic into our universe…With discounts and free trials coming up to coincide with the pack, there’s never been a better time to get involved.”

In Two Point Hospital, players must manage their hospital business as they manage staff, develop cures and design hospitals.

What are your thoughts on Two Point Hospital? What do you think about the cross-over event? Let us know in the comments below or on Twitter and Facebook.