The UK’s Two Point Studios are taking their healthcare not-simulator Two Point Hospital for another pass at consoles. The game originally came out on PC in 2018 and then was ported to PS4, Xbox One, and Nintendo Switch in early 2020. Two Point Hospital has players managing hospitals and treating patients in unconventional and often silly ways, but medicine is always making progress. Two Point Hospital Jumbo Edition is coming to consoles and no expense is being spared for the treatment of your patients. 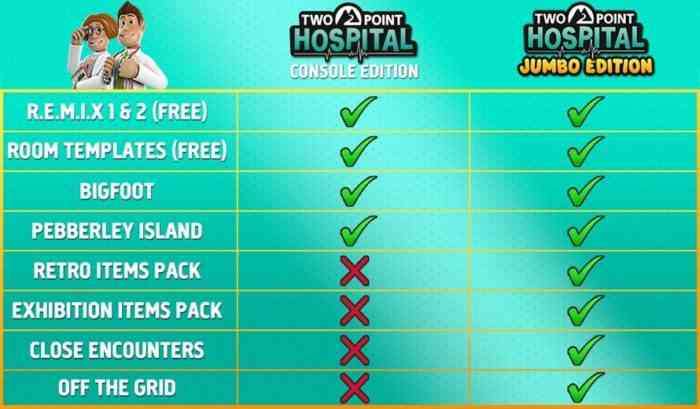 Since Two Point Hospital’s original release, it has come out with a bunch of title updates, DLC packs, and item packs. Some of those were included the first time the game was released on consoles, but the Jumbo Edition has even more. The free updates that are included are the REMIX 1 & 2 packs, which are bonus levels, and the Room Template function which allows you to copy and paste entire room setups between hospitals. The DLC packs that were included in the first Console Edition were the Bigfoot and Pebberley Island packs. The other DLC packs in the Jumbo Edition will also include Close Encounters and Off the Grid, all of which come with new locations, illnesses, and machines to treat them with.

The Jumbo Edition will also come with the Retro and Exhibition item packs. These packs allow players to buy and place themed items in their hospitals that would also be found in arcades and museums. The only content that Two Point Hospital Jumbo Edition does not come with are the most recent additions Culture Shock DLC, Fancy Dress pack, Free Zombie Costume, and the Sega 60th Anniversary item pack. Two Point Hospital is out now on PC, Xbox One, PS4, and Nintendo Switch. The Jumbo Edition will be coming to Xbox One, PS4, and Nintendo Switch on March 5th.

Have you tried Two Point Hospital yet? Let us know in the comments below.

Company Of Heroes 3 Announced With An Action-Packed Gameplay Trailer