Back in the 90s, games were games. We didn’t need 1080p, 60 FPS, flimity-flamity – we had pixels and by God, we liked it. Games were simpler but they were fun. Take RollerCoaster Tycoon – we kids would gather around the old Personal Computer and have a ball, just laying out our theme park, collecting revenue and loving it. And now, we can relive those glory days once again, with RollerCoaster Tycoon Classic. Even after all these years, its simple, addictive formula still holds up and will have you glued to your PC just like the first time around.

Now, if we’re being technical, RollerCoaster Tycoon Classic actually combines elements from the first two games in the RollerCoaster Tycoon series, but they were pretty similar. The old isometric view is back, as you build up your very own theme park by laying out pathways, small rides, bigger rides, and yes, eventually roller coasters to fill your park with throngs of happy customers. It’s amazing how easy the old RollerCoaster Tycoon games were to pick up, and that’s a testament to the original games’ design. That is still the case with this remake, as its intuitive menus and simple building mechanic allow you to just jump in and start, without the long, complicated Tutorials of today’s games. If you do get confused, pop-up hints usually solve your issues right away.

But while it is accessible and simple, RollerCoaster Tycoon Classic is also surprisingly deep as well. It has an ingenious way of slowly introducing more layers to the experience as you play – add food stands to your park, washrooms, cotton-candy booths, balloon stands and information booths, all satisfying the demands of your growing customer base as your park gains popularity. If you wish, you can micromanage nearly every aspect of your park, changing the price of rides, how long they run for, their color scheme, whatever. You can even run an advertising campaign to boost business. Or, just leave all of these in their default settings and just focus on the big picture. RollerCoaster Tycoon Classic is fun no matter what way you like to play.

And if you want challenges, RollerCoaster Tycoon Classic has you covered. In addition to the sandbox freebuilding, there are scenarios you can play – lots of them – usually involving meeting targets like a certain number of patrons by a certain date, making a target profit, and so on. In fact, these are great as tutorials, ramping up the difficulty as you complete each task. There are many hours of playtime in the scenarios alone. Again, RollerCoaster Tycoon Classic lets you choose how you approach it, and I love that.

I also love all the little details thrown in by the developers. Sell enough food and drink, and you’ll start to see puke and garbage starting to sully your park’s pathways. So, you’ll have to put garbage cans out, and hire caretakers to walk around and clean things up. Sometimes your rides break down, so you’ll need handymen to fix them. These hired hands stroll through the park just like the customers, and repairs and cleanups have to wait until they slowly make their way to the problem. Click on your workers or customers, and you can see information on them – how they feel, what they’re doing at the time, and where they are headed. RollerCoaster Tycoon Classic is one of the best “God Games” ever made. 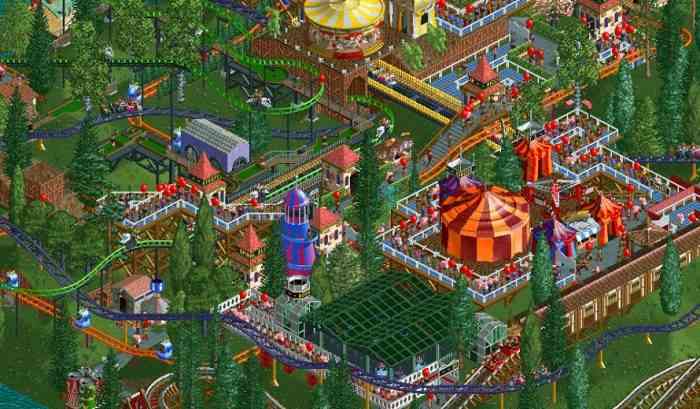 Of course, things aren’t all perfect, and there are a few things I would fix about RollerCoaster Tycoon Classic. The isometric view, while it mostly works, does make it hard to see everything going on in your park. For example, you might find one of your rides is being shunned by customers for some reason; turn the view 90 degrees, and you’ll see that there is no path to the ride’s entrance. And sometimes, despite the game’s level of detail, I still was not sure what made one ride more or less popular than others. How new it was, or how cheap, or other factors had an effect, I knew, but it was an inexact science for sure, especially when a formerly-popular ride (or my park as a whole) began to decline and I wasn’t clear on why. Then there’s the price – at $19.99 US, it’s a bit expensive for such an old game. When you think about how much enjoyment you get from that, it is worth it, but I could see the price being too steep for some.

“If there is one thing that sums up RollerCoaster Tycoon Classic, it is this: when I first started it up to play it for this review, I did not stop playing for 4 hours.”

As for the visuals – hey, this is a game originally made over 15 years ago. So yeah, it’s pixelated. And on a bigger modern monitor, you’ll wish there was a resolution upgrade. My screen is 17”, and I never found it to be all that annoying; playing RollerCoaster Tycoon Classic on a bigger monitor, though, might not be ideal. But on the other hand, the color and detail of the original is just so endearing, it makes up for any resolution shortcomings. Sound effects are cute as well, although most rides have one clip that seems to play on a loop, so the novelty will wear off after a while. I admit I turned my sound off after about an hour of playing.

If there is one thing that sums up RollerCoaster Tycoon Classic, it is this: when I first started it up to play it for this review, I did not stop playing for 4 hours. It is the epitome of the “just a few more minutes” addictive gameplay that many games attempt, but few achieve. If you were a fan of the original, check it out for a nostalgic rush. If you have never played it at all – this one is a must. Trust me, once you start RollerCoaster Tycoon Classic, you’ll have a very tough time stopping. 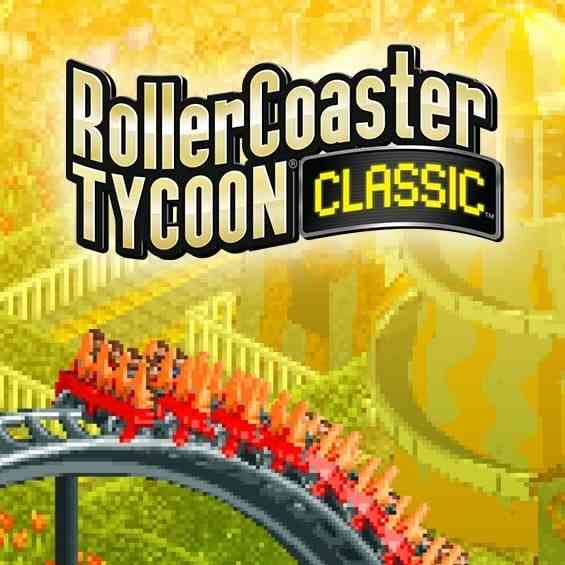