Ah, the roguelite. Once a rare and elusive bird, this breed of indie game is now flourishing on almost every gaming platform currently available. With this proliferation comes endless variety. Whatever niche you dream up can be found, no matter how bizarre it may be. On that note we arrive at Freaky Awesome, a roguelite with a dash of body horror thrown in for a little extra spice.

You’re just one man looking for his dog in an abandoned factory full of glowing ooze. After going for a leisurely swim in the stuff, you emerge as a man reborn. More specifically, a sort of fleshy birdman without feathers or wings or a beak. Alternately, you may emerge as a giant cloaca with a stretchy neck and four tiny feet. What better way to celebrate the mystery of life, than by transforming into something that truly shouldn’t exist?

“You’re just one man looking for his dog in an abandoned factory full of glowing ooze.”

When you begin Freaky Awesome, you may pass by the difficulty slider without a second thought. Later, after thirty or forty times through the meat grinder, you may wonder if you made a mistake. Should you have set the game on easy? Did you bite off more than you can chew? I’m here to tell you now: rest easy, my friend. That setting doesn’t exist. What suffering you’ve endured on normal can only grow more intense, not less. Perhaps I’m simply not up to the task, but I’d still like the opportunity to dial back the savage ass-whuppings, even if doing so marks me as an embarrassment and an amateur. 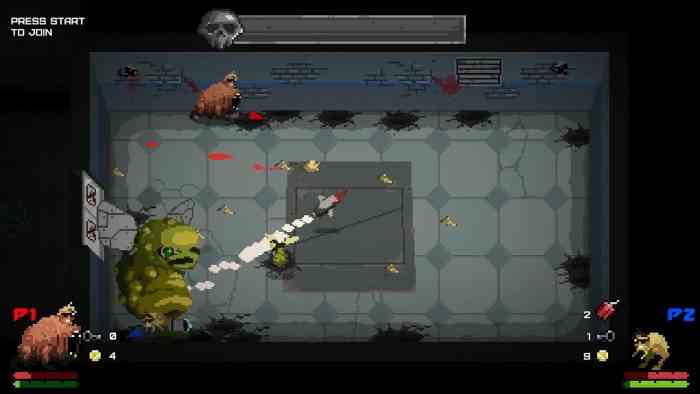 Hours into my experiment regarding the futility of man’s search for meaning, I was gifted with a ray of hope. A new mutation was bestowed upon me. Rejoice! No longer would I be forced to choose between wingless bird and birdless butthole! I could now transform into an anglerfish-out-of-water. Alas, my joy was short-lived. His standard attack, when applied to the explosive crates in a desperate search for currency, left me stranded in concussive fire. Each mutation comes with a similar tradeoff. You can be mobile or strong, you can have a long neck or actual legs, you can be the fish-thing or just, anything else. Such is the dizzy dance of evolution.

That music, though. Good god, what a glorious racket. I would alt-tab away from the game, intent on productivity, only to get lost in whatever fantastic track was still playing. Every song is this perfect mix of intensity and oddity, a fitting complement to a game that sometimes lets you lay eggs containing tiny clones of yourself. Like the game’s Chernobyl-esque setting, the music feels like a time capsule from a bygone era. Oddly enough, it isn’t the same era that gave us Chernobyl, but this is a decision I’m fine with. If this soundtrack gets a separate release, I highly recommend you track it down.

“The tiny sprites come to disgusting life, evoking Cronenberg at the height of his power.”

Frustrated as I became, the design work on display still earned my respect. The tiny sprites come to disgusting life, evoking Cronenberg at the height of his power. Every monster and mutation is a proper mix of silly and unsettling. In particular, the bosses are terrific examples of quality sprite work. They’re exhausting to throw yourself against, but at least they look really cool. I found myself truly impressed by one baby-headed cyborg even as its breath weapon shredded my body for the eighth time.

A good roguelite shifts from stick to carrot, tantalizing you with powerups while grinding your nose into the muck. For me, the balance of these two forces in Freaky Awesome felt a little off. I endured a lot of failed runs before any new abilities appeared, all the while being denied even the illusion of forward progress. I collected coins that could potentially be spent on permanent upgrades. The trouble was, I couldn’t ever get enough coins to afford this. I would get ever so close, always perishing with 90% of the required funds in hand. You have an option to put your money towards upgrading the shop, but it doesn’t feel like it makes a big difference. The item selection is still pretty random.

Freaky Awesome has a fascinating premise, incredible music and delightful enemy design. Unfortunately, my biggest problems are with the game’s core mechanics. While I’m fine with the game being crazy hard, it never felt like my repetitive assaults ever built towards anything. Your rewards for exploration and combat are so random it feels like straight-up gambling. I’m confident that playing for ten or twenty more hours would unlock more content. I would have a wider variety of items to find, as well as a new mutation or two. I’m not as confident it would be an upgrade, however. If I’m going to be sacrificed on the altar of a punishing game like this, I need to be tricked into thinking things are getting better. If the look and feel of Freaky Awesome have you intrigued, by all means, take the plunge. Though, I must warn you that the ride will be a savage one. 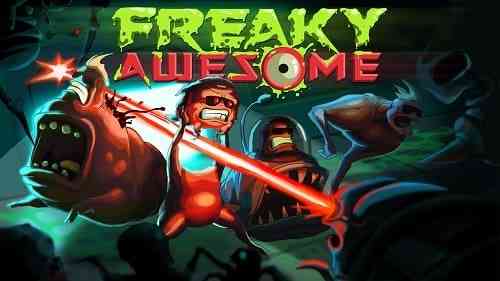 
Atomicrops Is The Bloodiest Farming Simulator I Can’t Stop Playing