Overgrowth Review – Hop, Skip and a Jump in the Wrong Direction

Overgrowth gave me some fantastic moments during its incredibly brief campaign, but also some disappointing gameplay alongside some buggy platforming. After already being in development for just over nine years, should developers Wolfire have waited just a bit longer to iron out the kinks?

Turner, the protagonist of this story, arrives on the shores of a new island with hopes of a peaceful, relaxing life; a dream that is swiftly pulled out from under him as he gets strung into killing his way through slavers and feral animals alike. We don’t learn much at all about the actual world Turner lives in, only that we have to fight some animals because they’re enslaving some other animals.

“Despite its simplicity, Overgrowth is very hard to master, and really gets the blood pumping as you, quite literally, leap into the fray…”

The story quickly starts to feel shallow after the first few levels, making it seem like it is only there to usher us from one brief fight to the next, not to tell us an actual story or give Turner any kind of character arc. Each level is over very quickly and is set in vast, empty areas peppered with one or two groups of enemies to kill. Though they’re pretty looking areas, it all just melts down to a handful of twenty-second fights and then you’re on to the next one.

With Overgrowth’s campaigns both lasting just over an hour each, there isn’t much else to do besides try out the arena mode, which is an endless wave of enemies coming at you. There is a Steam workshop page that is constantly putting out new content to play with (some of which has been more fun than the actual campaign), but the actual story is over very, very quickly, and all that’s left is more combat. 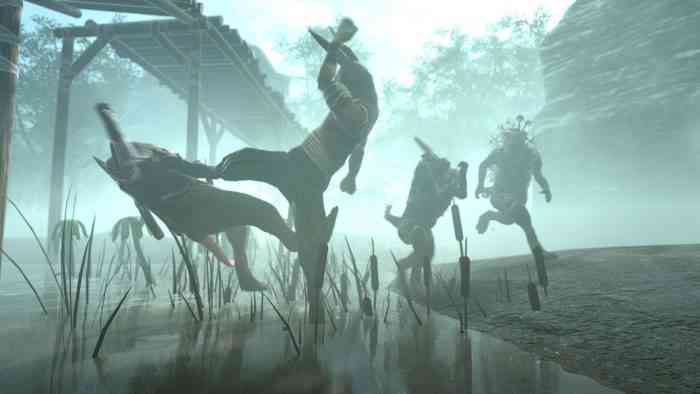 Speaking of, the combat in Overgrowth is fast. So fast, in fact, that there’s even an option to turn down the speed of the punches/kicks if you’re a weakling like myself. Besides that, the combat is also very simple; left click to attack, right click to block, space to jump, and ctrl to crouch. Mix these buttons together to create a flurry of devastating attacks that you will ultimately ignore and just use your bunny legs to dropkick everything that looks at you funny.

Alongside the combat mechanics, there are weapons to use, and various other animals for Turner to fight against, each of which comes with its own fighting style. On the one hand, rats are fast little buggers who can be killed with a swift kick to the head, but wolves, on the other hand, are tougher, boss-like enemies that require tactics to defeat. Each race has their strengths and weaknesses, so taking a wolf head-on will spell disaster.

“It has all the pieces to be a great martial-arts, parkour, bonanza, yet the buggy controls, repetitive fights, and short campaigns all let it down.”

Despite its simplicity, Overgrowth is very hard to master, and really gets the blood pumping as you, quite literally, leap into the fray and launch a dagger into a giant rat’s chest before dropkicking his friend into the ocean; or, failing that, launch a dagger at a giant rat who then plucks it out of the air and sends it straight back at you.

For a while, it felt like I was button mashing and frantically spamming blocks, or simply falling back on my trusty dropkick, but once I slowed things down I started to get into the swing of things. Yet despite all the crazy martial-arts shenanigans that I had, the combat feels pretty lackluster after a few hours. The fights were sweet but short and it quickly began to get very repetitive.

I know it seems like I hammered on about the combat for a while, but that was honestly half of the game. The story was over before I could really get into it, the second story fell short as well, and the arena modes are just pure combat. With jumping, wall running, and climbing mechanics having been thrown into the mix, the other half of the game was bound to be some kind of platforming. 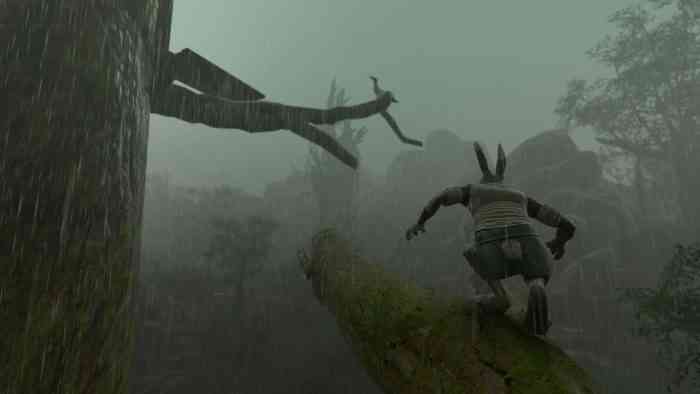 Now, what with him being a rabbit, Turner can jump pretty damn far. This is great for surprising enemies on the other side of a field, but not so much when you need to hop to a branch a few feet away. This turned out to be true whenever I had to scale a building, or giant tree, where I’d completely fudge the jump and break my neck on a branch. There were even a few times where the controls would just not work how they were intended, which lead to many deaths where Turner would refuse to wall run and fall hilariously to a crunchy death.

One saving grace for the platforming is that failing them put me right back into the action, only set me back a few seconds as I respawned where I initially jumped. This doesn’t make the controls any less clunky, or Turner any better at grabbing a bloody ledge, though. Another blessing this game has is its community. The steam workshop has several mods that revolve around the parkour and combat in Overgrowth, and some are even more fun than the actual game itself. It adds a few more hours of gameplay, but that still isn’t a lot for what you’re paying.

As it is, Overgrowth feels a bit too empty. It has all the pieces to be a great martial-arts, parkour, bonanza, yet the buggy controls, repetitive fights, and short campaigns all let it down. The modding community does bring the game’s value up tenfold, adding whole new levels to play and parkour challenges to annoy yourself with, but it’s not enough to make it feel complete. 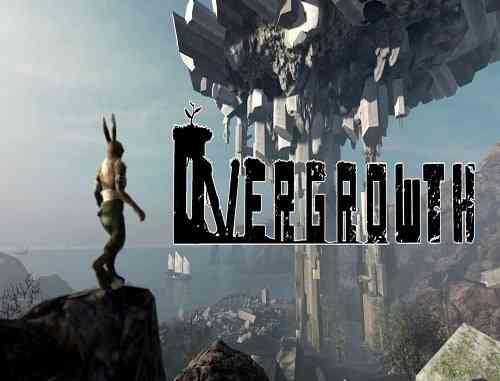