The Hateful Eight, the eighth film by Quentin Tarantino, is the modern equivalent of a Shakespearean tragedy; it is a glorious celebration of language, created by a master of its form. The film takes place across very few sets, and while it feels very much like a play, it is also very cinematic. And as much as I don’t want to gush in my first film review for COGconnected, like most of Tarantino’s (and Shakespeare’s work), The Hateful Eight is a masterpiece.

The film begins with Samuel L. Jackson as Major Marquis Warren, a Civil War veteran, and correspondent of Abraham Lincoln, sitting on a pile of dead bodies, waiting and hoping for a ride from a passing carriage. The first carriage that passes him by is driven by O.B. (played by James Parks), who has been hired by John “The Hangman” Ruth (Kurt Russell), a bounty hunter transporting Daisy Domergue (Jennifer Jason Leigh) to be hanged for crimes unknown. The Hangman is former acquaintance of Major Marquis, and although he is hesitant to offer a ride to another killer, humanity overcomes!

These four meet another person stranded by the blizzard, Chris Mannix (played by Walton Goggins), who claims to be the soon-to-be instated Sherriff of the town both men are taking their bounties to. The five carriage riders know they won’t make it into town before the heart of an impending blizzard catches up with them, so they stop at Minnie’s Haberdashery to wait out the storm.

“Although most of The Hateful Eight is dialogue-based, the film is still a sight to behold. It is homage to the glory days of 70mm film, which it was shot in.”

At the haberdashery, Minnie is nowhere to be found. The group is greeted by Bob, played by Demian Bichir, a Mexican ranch-hand, who is taking care of Minnie’s while she is away. Inside they find three other people caught in the storm: Oswaldo Mobray (Tim Roth), Joe Gage (Michael Madsen), and General Sandy Smithers (Bruce Dern). Mobray is a scene-stealing Englishman, who happens to be the hangman (the guy who does the hanging) in the town that The Major and The Hangman are heading to. Joe Gage is a cowboy, who claims to be writing his memoirs, while on his way to visit his mother. And General Smithers is an old military veteran, who was on the other side of the battlefield from Major Marquis Warren. 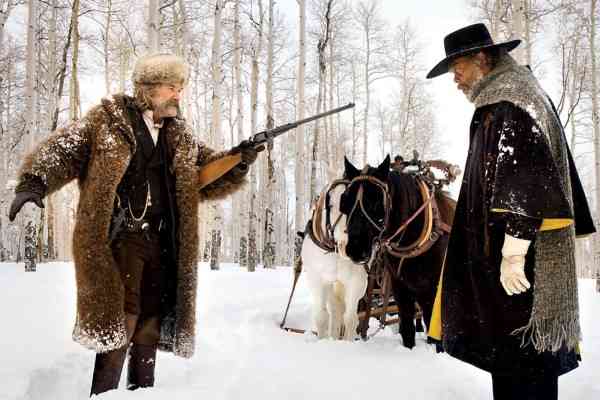 I write “seems” for many of these character descriptions because The Hateful Eight is a mystery, and it is immediately established by John Ruth, that it is likely that someone among them is plotting to free his bounty. Major Marquis also immediately questions the whereabouts of Minnie. To say anything more about the plot would enter spoiler territory, so I will leave it at that. The Hateful Eight is largely a character piece, and the performances are all fantastic.

I would like to point out that this gives us a cast of a “Hateful Nine”. If you’ve seen the posters for the film, you will know which of these nine is not considered “Hateful”, but I enjoyed counting while the movie was in progress. If you enjoyed trying to figure out which places the Seven Kingdoms were comprised of, in the early proceedings of Game Of Thrones, then The Hateful Eight will give you similar satisfaction.

“If you’re not a fan of Quentin Tarantino’s work, The Hateful Eight is not the film that will convert you. It is very slow-paced; it chews up its moments.”

Although most of The Hateful Eight is dialogue-based, the film is still a sight to behold. It is homage to the glory days of 70mm film, which it was shot in. The detail of the mise en scène is rich, and amplified by the large film print. And even though the film is very intimate, its cinematography is epic! The Hateful Eight opens with a very Stanley Kubrick-ian overture card, and a very bombastic and strange Ennio Morricone score, channeling The Good, The Bad And The Ugly. The opening shots are long Imax-like scenes of blizzard-covered wilderness. The Hateful Eight is a movie for fans of the great film auteurs.

So who wouldn’t like this film? If you’re not a fan of Quentin Tarantino’s work, The Hateful Eight is not the film that will convert you. It is very slow-paced; it chews up its moments. Since Death Proof, Tarantino’s films have felt like much more like expertly edited together extended dialogue sequences, and The Hateful Eight is no exception. And with its overture and intermission, the film is just over three hours long; this is not one for the impatient.

Although The Hateful Eight is slow-paced, it is very surprising, and hilarious. Samuel L. Jackson delivers one of the most memorable monologues in film history, which ranks right up there with Tarantino’s finest work. It is one of my favorite films of 2015, along with Kingsmen: The Secret Service, Ex Machina, Deathgasm and It Follows. If you are a fan of Quentin Tarantino’s work, classic cinema, or at all curious, then do yourself a favor, and see this modern masterpiece. 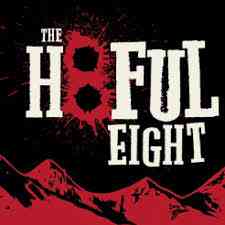