Amplitude Review – Dreams Have Come True for Fans of the Original

Amplitude is back after a successful Kickstarter campaign, which began in 2014! The original game’s code was used to faithfully create a sequel to the PS2 original that many have been waiting almost 13 years for. The original Guitar Hero was kind of like “Amplitude 2” (or “Frequency 3”), and the home music/ rhythm genre hasn’t gotten away from instrument-based peripherals, and gone back to the frantic controller-based gameplay of the original, until now. I played a lot of Insane-level Amplitude circa 2003, so when I found out that it was getting an official sequel in 2016, I was excited! And guess what? It’s wonderful… and only $20!

In Amplitude, you play as a laser-zapping, arcade shooter-type ship, which blasts nodes on tracks that represent beats or notes in songs. Each ship track represents a different audio track of the song, for example, the blue lanes represent bass, the green lanes represent vocals, etc. There are left, right, and middle positioned nodes on each track, and the player has to hit the L1, R2, and R1 buttons, to zap their respective nodes, and press left and right on the d-pad to move from track to track. Once a bar (series of nodes) is accurately completed, the track temporarily falls away, which allows the player to jump to the next track. If the very next bar on the next track is completed, this racks up a score bonus. There are power ups, which can be gathered by completing labelled bars, which allow the player to double their score, automatically complete tracks, etc. The player has a health gauge, which will deplete with poor performance, but the true fun of Amplitude comes with trying to master songs, and compare scores with your friends.

There are several much appreciated updates to Amplitude. Most of the features and menus have been cleaned up. There is a quick play mode, with an overall track score displayed, which means you don’t have to beat every song on every difficulty, but it will now be harder to earn that fourth bar, because a perfect performance on easy or intermediate won’t yield enough points for it. There are also online leaderboards now, which are clearly displayed along with each song, so you know where you rank with your performance. Songs can be played via a quick play feature, but must almost entirely be unlocked by playing through x number of songs. 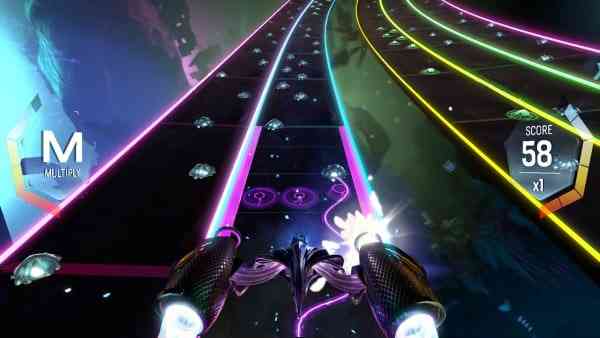 Amplitude’s mightiest new feature is definitely its campaign mode. In an ode to progressive music, the team at Harmonix has assembled several songs that create a sci-fi music concept adventure, about a brain needing to be fixed. There was obviously a lot of love that went into creating the music for this new game.

There are very few gameplay differences in this new game. One is that your ship will automatically jump to the next open track, with a push of the d-pad. Gone are the days of frantically pushing left six times in a fraction of second, to get to the track on the opposite side of the screen, in order to keep your score going! Another is that if the player sees a power up coming the next bar, you now get it! Also there are some fun additions to the boss songs in campaign mode. All of these changes are small, but create a more streamlined gaming experience.

“The new game is full of fantastic modern electronic tracks. Sadly there are no big licensed artists to be found, but there are plenty of Harmonix favorites like Freezepop and Symbion Project. My favorite tracks include Perfect Brain, Dalatecht, and Crystal.”

The controls are tight, and you will never feel betrayed by the game. My only complaint is that the updated PS4 controller has L2 and R2 trigger buttons, and pushing on an R2 that feels very different than the L1 and R1 buttons is an unwelcome handicap. This only becomes an issue on higher difficulties, when you’re striving for perfection. And it’s not at all the fault of the software. Also there’s an option to use square, triangle, and circle in place of L1, R1, and R2, but I tried going down that road in my youth, and I promise that higher levels, two hands are better than one.

The visuals aren’t mind-blowing, but the game looks good. The backgrounds are a perfect complement to the gameplay, and music.

A music game can’t be great unless it has music the player can get into. The original game was a bit of a mixed bag. For every great house track, there was a P.O.D. song. There was also some rock and metal mixed into what was a dominantly electronic soundtrack (seriously there was Blink-182 and Slipknot). The new game is full of fantastic modern electronic tracks. Sadly there are no big licensed artists to be found, but there are plenty of Harmonix favorites like Freezepop and Symbion Project. My favorite tracks include Perfect Brain, Dalatecht, and Crystal. 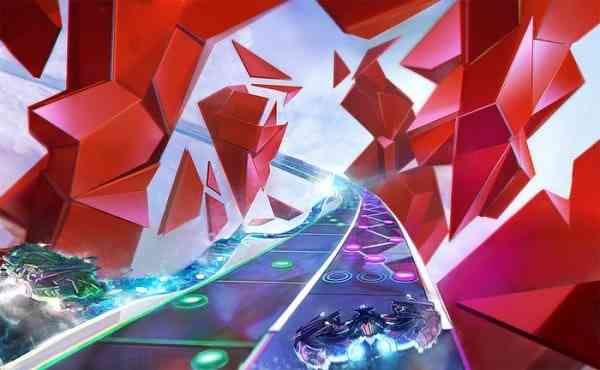 It doesn’t look like there’s going to be any extra DLC for Amplitude. I love the idea of getting a complete game, but after the age of Rock Band, it seems anticlimactic to not have any more songs to look forward to. But this is a $20 game, with enough base content for a $70 game, and this gripe is more of a wish, than a “something wrong”.

So there you have it, Amplitude is a dream come true. It is the near perfection of the music/ rhythm genre. It’s extremely fun, and a great local multiplayer gang game. It’s easy to pick up, and play, and satisfying to master. And it’s only $20! Get it! 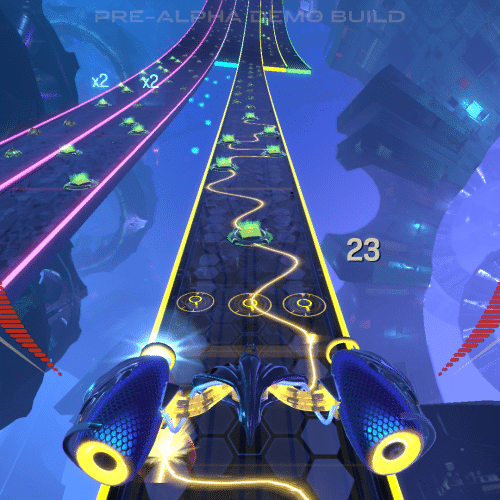 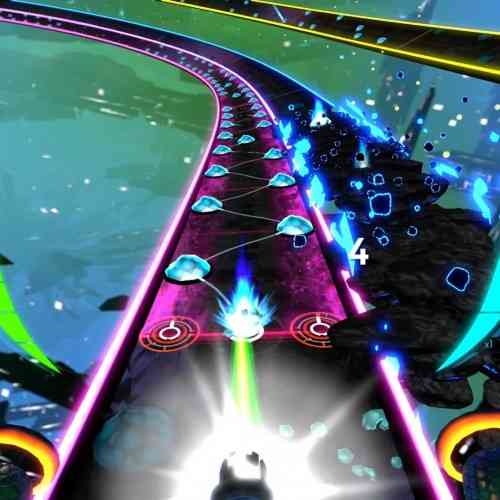 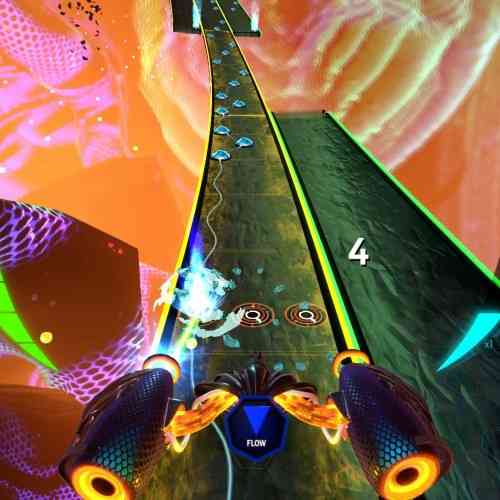 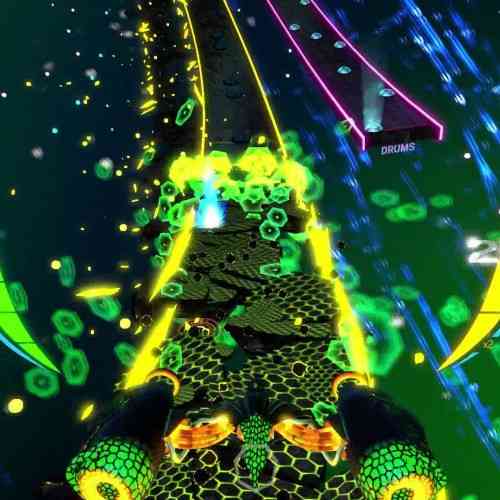 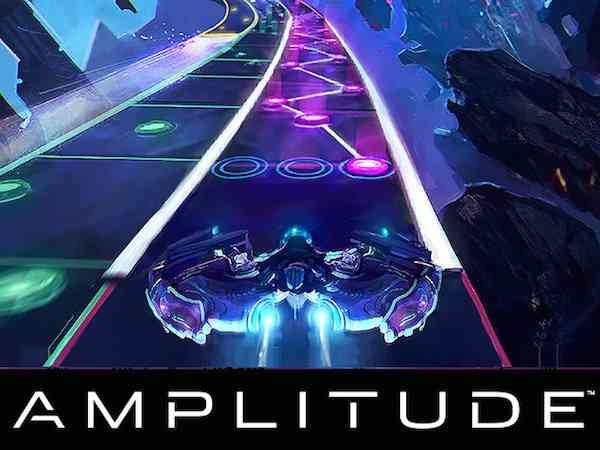