Rock Band 4 and Its Controllers Are Cross-Generational

Developers behind Rock Band, Harmonix, recently announced that Rock Band 4 will be backwards compatible on PS5 and Xbox Series X/S. Not only will the software work on the next-gen consoles, but the controllers will also work, allowing you to jam out on your Rock Band 4 drumset for a whole new generation. Gamers who upgrade their consoles who have friends who choose not to will still be able to play Rock Band with their friends if they’re still in the same family of consoles. Rock Band 4 is available right now for PS4, and Xbox One. 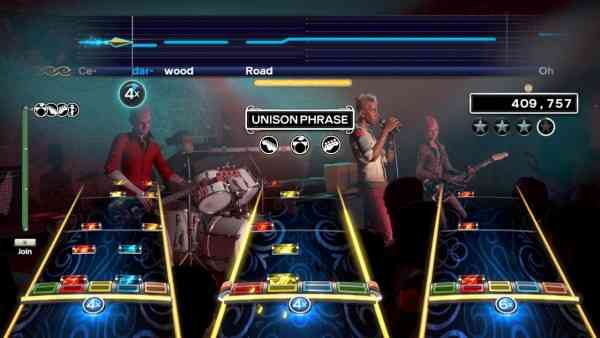 “Rock Band 4 and all DLC will work on the next generation consoles day 1. We believe previously supported instruments should work as expected,” said Harmonix in a recent blog post. “Our team has been diligently testing a bunch of old gear on the new systems to make sure everything works exactly as it does today. When you break open those crisp new consoles, you should be able to connect your existing, compatible peripherals and play Rock Band 4 right out of the box.”

“Online Multiplayer will also function across generations within their console family. So, Xbox Series X/S players will be able to play online with Xbox One players and vice versa, same on PlayStation 5 with PlayStation 4 players,” continued the Harmonix post. “On the PlayStation 5, there’s a microphone in the controller, and the console defaults to that microphone, which Rock Band 4 recognizes.” Most current-gen controllers for Rock Band 4 will work on PS5 and Xbox Series X/S, particularly Mad Catz peripherals.

Will you be rocking out to Rock Band 4 on the next generation of consoles? Let us know in the comments below!

Kena: Bridge of Spirits Reveals Photo Mode, New Trailer Ahead of Launch
Next
Aloy Can Walk Forward on Horizon Zero Dawn PC
Previous
Sniper Elite 4 Is Shooting up the Switch Next Month