Super Mutant Alien Assault has a fairly straightforward plot and narrative. Earth has been attacked by aliens and the only thing standing between the destruction of the human race and aliens are battle droids. Taking place across twelve levels which are spread across three ships, each of the game’s levels take place on a single screen with no scrolling. Everything you see in each level is supposedly randomly generated so the weapons you use and enemies you fight will be different on each playthrough. This randomness is sometimes a blessing and other times a curse.

The game does a good job of introducing you to the core mechanics. Prior to using a certain skill or weapon for the first time, it pauses the action and gives you a general overview of the basics. The game’s weapons and abilities are distributed via vending machines and boxes. It’s important that your droid hits the vending machines and boxes as soon as you enter a stage so you can be prepared for the alien onslaught. Droids typically carry a primary weapon, a secondary weapon such as a sidearm, explosives, defensive moves, and perks. My favorite weapon was the remote detonated explosives as they can inflict a good amount of damage when perfectly timed. Grenades, on the other hand, are easily the worst weapons in the game because they bounce unpredictably and commonly injure or kill your droid.

“Super Mutant Alien Assault can be downright frustrating at times.”

It’s not just the grenades that leave a sour taste. The defensive moves and special abilities feel tacked on and unnecessary. Some of the defensive moves include a quick dash, double jumping, and a bubble shield. I rarely found myself even using these abilities as it was way more effective shooting enemies and using explosives.

The enemies you’ll fight vary in terms of their quickness, size and the damage they can sustain. Some enemies quickly move left or right across the screen, while others can fly in groups. The AI is fairly predictable and uses the same patterns for movement across each level. That being said it can be a little frantic trying to time your jumps and attacks when you have multiple enemies on screen at once. In fact, that is one of my gripes with the game; Super Mutant Alien Assault can be downright frustrating at times. It was pretty normal for me to die fighting a boss only to have to restart from the beginning. This isn’t helped by the randomness of the game which can generate different weapon loadouts that aren’t well suited to the enemies you’ll fight in a level. 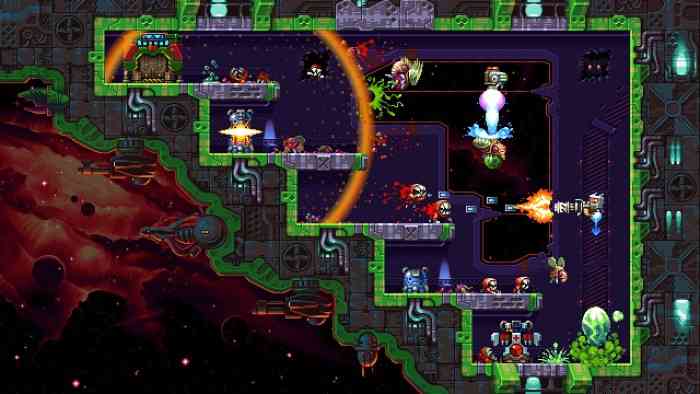 What is nice about Super Mutant Alien Assault are the different objectives offered in each level. Rather than having all levels offer the same objective of killing enemies, there are a few different objectives you’ll complete over the course of the game’s story. One involves moving batteries from one part of the level to another until you achieve warp speed, while another has you relieving the pressure from canisters before they explode and injure or kill your character. The last stage of each chapter sees you fight a boss alien. It’s variation like this coupled with the randomness that prevents the game from becoming stale too quickly.

“Super Mutant Alien Assault will keep your attention for a few playthroughs, but don’t expect much else.”

Super Mutant Alien Assault’s presentation is a throwback to old 16-bit games I remember playing as a kid. The animations and artwork look reasonably good with nice little details such as explosions and enemies being obliterated.  Included in the mix is a soundtrack that is heavily leaning towards the dubstep side of things. While I normally don’t enjoy dubstep due to my musical tastes resembling that of a 50-year-old male, it surprisingly works well here.

The single player can be completed easily in one sitting, but the game also offers an endless mode that lets you replay the game’s twelve stages over and over until your character runs out of health. Super Mutant Alien Assault will keep your attention for a few playthroughs, but don’t expect much else.

Warhammer 40K: Inquisitor – Martyr Announces a New DLC Class
Next Romance of the Three Kingdoms XIII Review – Overwhelming and Dull
Previous The Detail Review – The Devil is in the Details