Fighting game franchises have been making somewhat of a resurgence in the past little while, with games such as Tekken 7, Injustice 2, and more recently Dragon Ball FighterZ coming into the forefront. In addition to these, Street Fighter V continues to be popular and titles such as Super Smash Bros. Ultimate and Dead or Alive 6 are on their way as well. It comes as no surprise then, that at The Game Awards 2017, the announcement of Soulcalibur VI by Bandai Namco was met with much fanfare and excitement.

Jumping into the middle of any series can be daunting, let alone the sixth iteration. However, Soulcalibur VI acts as a reboot of the series, going back to the late 1500’s. The game has the main storyline featuring the battle between Soul Edge and Soul Calibur, as well as storylines for each character. As someone unfamiliar with the original storyline, I can’t make any comparisons between the two, but Soulcalibur VI’s storyline is interesting and narrative-focused. The story is generally told in cutscene sequences and dialogue and is overall done quite well. The main story is told in the Soul Chronicle mode, but the Libra of Soul mode allows players to create their own character and set out on their own story.

Alongside the Soul Chronicle and Libra of Soul modes are the staple Arcade and Versus modes, giving players a solid variety of ways to play the game. Unlike most other fighting games, Soulcalibur VI (along with the rest of the series) is a title that features combat with weapons. Overall, the combat is smooth and appears to be technically sound, with factors such as character height, speed, and range all playing factors among others. In addition to being smooth, the game is simply just fun whether the fight is closely contested or even when you’re trying to mount a comeback or look for a ring out. The new Reversal Edge mechanic puts the fight into a slow-motion sequence, acting as a sort of rock-paper-scissors exchange between two players. As a casual fighting game fan, I enjoyed this inclusion but can understand if others do not.

As mentioned, character statistics matter in terms of their size, but their unique abilities and weapons also play significant roles. As a result, strategies may differ between opponents, and an overall understanding of each character will be necessary for the most dedicated players. Soulcalibur VI also appears to bring back most of the series’ mainstays such as Mitsurugi, Ivy, and Siegfried to name just a few. The game also introduces new characters Groh, Azwel, and guest character Geralt from the Witcher series, who fit into the game much better than I had anticipated. The game will also have additional characters coming by way of DLC, and players are also able to customize characters as well. Having played a couple of the past Soulcalibur games, I do wish they had more guest characters, but as a reboot, I can understand why they might want a more focused lineup. 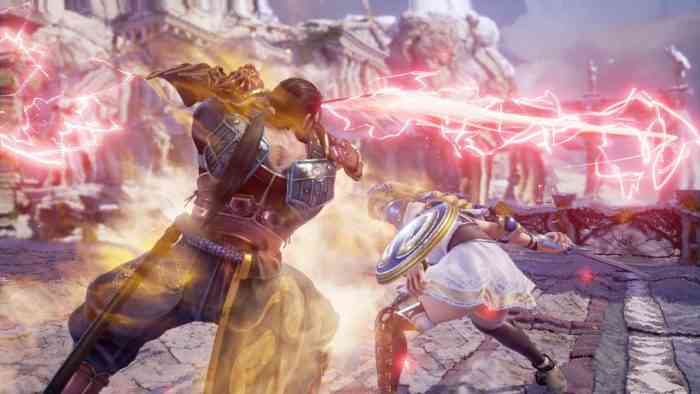 As a fighting game, the attention in-game is focused on the characters and the environment, and Soulcalibur VI nails them both relatively well with just a few minor hiccups on an Xbox One S While the details appear to be on point, the special effects during a Reversal Edge or a Critical Edge make the fight that much more exciting when they occur. Likewise, the dialogue both before battles as well as over the course of the story modes is done well. Overall, the presentation of the game was sufficient in engaging players and providing an interesting narrative.

As a reboot to the series’ story, Soulcalibur VI is interesting and accessible to all players. As a fighting game, the title is just as accessible and is a quality addition to the genre as well. Though the game could use some more characters, Soulcalibur VI brings the series to contemporary gamers with its classic roster of characters, fun game modes, and robust gameplay under a fresh coat of paint and improvements. If you enjoy fast-paced, exciting combat that is easy to pick-up (and hard to master, as per usual), give Soulcalibur VI a look.

A Character Returns to the Fight as Soulcalibur 6 DLC