Rocket Riot Review – I am a Banana

In 2009, indie developer Codeglue unleashed Rocket Riot on the world via Xbox 360’s Xbox Live Arcade. Now, seven years later, Codeglue is bringing Rocket Riot back, this time to Steam and Windows 10. If you’ve never enjoyed Rocket Riot before, now is your chance.

Rocket Riot features nine separate campaigns to play through (spread over 200 missions) and each campaign features a unique set of characters. The primary story line features the evil pirate Blockbeard escaping from prison and enacting his revenge on the world by stealing everyone’s legs (you read that right). Undeterred, scientists develop a rocket that attaches to people’s butts. You’ll start off as Chuck and blast your way through the campaign to stop Blockbeard. Another campaign features a banana lawyer who discovers a tennis player, Bjorn Block who enjoys eating bananas – so our banana lawyer sets out to stop this banana-eating bandit. The campaign stories are ridiculous but funny. Each campaign features cutscenes to introduce the story (still images with text) with additional cutscenes intermittently throughout.

“The campaign stories are ridiculous but funny.”

You begin the game by picking a campaign of your choice – it’s recommended you pick the first campaign, but it really won’t matter much. You’re thrown into a level armed with your rocket and you can move your character 360 degrees on a 2D plane. Enemies will appear out of thin air and shoot their own weapons at you. The most common level objective is deathmatch where you need to kill the predetermined set of enemies. Occasionally, Rocket Riot spices things up with different objectives, such as a football type match where you must pick up the football and carry it back to the goal. There are 20 different power-ups, spread across four different, colour-coordinated, types. For example, the green class is offensive – such as the big rocket or the machine-gun rocket. The red type is designed to hinder you, such as one that makes it difficult to control movements. The power-ups only last for a brief amount of time. Once you’ve completed the level’s objective, you’ll move on to the next level. Dying forces you to start the level over again – but since most levels are only one to two minutes in length, it’s really not a big issue. 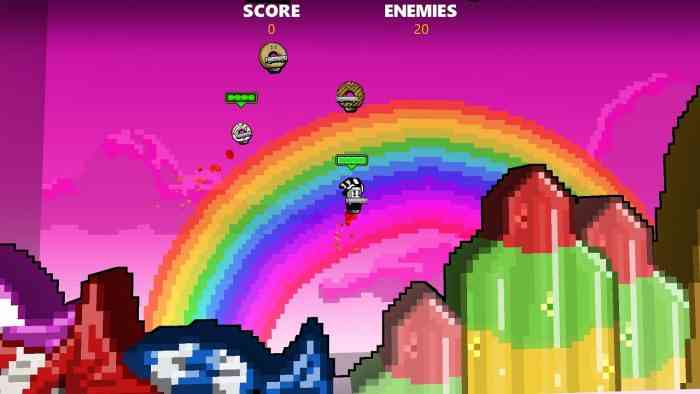 The games controls are very simple. You can use a controller or keyboard and mouse (my preference was the controller). With the controller, the left stick moves you, the right stick shoots – but you have to hold the direction you want to shoot to charge it up, otherwise the shot barely goes anywhere. The simplified controls come in handy when the action gets intense and there’s little time to think.

The biggest complaint with Rocket Riot is the lack of multiplayer. This type of game would be awesome against (or even co-op with) human players – but unfortunately multiplayer is not an option. I could understand the lack of online multiplayer due to the fast-paced nature of the game, but that shouldn’t prevent local multiplayer being an option.

“It’s a bit odd that we’re seeing Rocket Riot return after seven years, but hopefully, its success could lead to a proper sequel!”

Rocket Riot is a mix of retro 8-bit style graphics, with cute characters and a fully destructible environment. There is a vast assortment of characters in this game (over 300!) and they’re all unlockable by finding and killing them throughout the campaign. The soundtrack is filled with upbeat and fun tracks that keep up with the games frantic pace. The game’s menu music “Go Bananas” will probably be stuck in your head for the immediate future.

Rocket Riot is a fast paced game with tons of frantic action. The soundtrack is top notch and the graphics are fun and colorful. The games nine campaigns will keep you busy for a while – but due to the somewhat repetitive nature of the gameplay, you’ll probably enjoy it more in short spurts. The only real complaint is the lack of multiplayer. It’s a bit odd that we’re seeing Rocket Riot return after seven years, but hopefully, its success could lead to a proper sequel! Consider Rocket Riot as highly recommended!