Best known for their work on Rock Band and Dance Central, developer Harmonix is now turning its attention to VR. VR is a technology that Harmonix has put a lot of faith in. In addition to releasing Harmonix Music VR (Music VR), the developer is also working on Rock Band VR for the Oculus Rift and Sing Space for Samsung VR. Music VR isn’t so much a game as it’s more of a music visualizer with a focus on letting you experience your music in a way you haven’t before. One of the best features of Music VR is that you can use your own music by plugging a USB stick into your PS4. The game also features its own soundtrack borrowing heavily from the recently released Amplitude reboot.

Music VR comes with four mini-games including the beach, easel, dance party and trip. The beach and trip are for passive players who want to just sit back and relax. The beach lets you relax in a tropical paradise and interact with several objects to create visualized sequences timed to the beat of the song. I’ve never done drugs, but if did, I imagine it might resemble the visualizers in the beach. One thing that is nice about the beach is that you don’t have to bother interacting with any objects in the environment, so you can literally just soak up the sights. The beach is an interesting concept, but I felt a little overwhelmed with some of the more crazy visualizers. Aside from the visualizers, there isn’t a whole lot going on in the environment, making it feel stale after several playthroughs. The trip lets you navigate through a series of patterns and colors timed to the beat of the song. The trip is definitely the stronger of the two passive modes, although it features no interaction with the world. The trip is cool the first few times you play it, but it grows old as you start to see the same patterns and colors repeated.

“Music VR isn’t so much a game as it’s more of a music visualizer with a focus on letting you experience your music in a way you haven’t before.”

Easel and dance party are the most interactive modes. Easel allows you to paint using the move controllers on a blank canvas. One move controller acts as the easel while the other is your paint brush. The paint changes colors in time with the beat of the music. Easel is the strongest mode of the four available (which isn’t saying much) since it gives you the most freedom, but there’s just no real depth to this mode. How much you get out of Easel will largely depend on how much you enjoy drawing on a blank canvas.

Dance Party is easily the strangest of the four modes. Dance party takes place in a school gymnasium and allows you to manipulate the movements of several characters timed to the beat of the song. You can also teleport to a few other locations of the gym and play DJ at a turntable, shoot a party cannon, sound a horn or play puppet master and pick up individual objects or characters and throw them around the gymnasium. Like everything else in Music VR, this mode grows tiresome after a few plays. 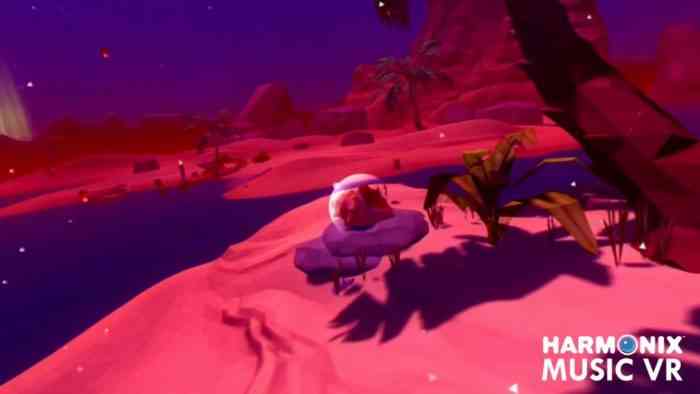 The big problem with Music VR is that the game just doesn’t have a lot of substance. The game captures your attention for the first few plays but quickly grows tiresome and dull. I didn’t really feel like I was experiencing my music in a way that was better than before. As someone who works a desk job, I usually am listening to music while doing something else. Music VR didn’t open my mind to anything new.

Music VR feels like a game should have just been included as a tech demo rather than being released as a standalone game. It’s hard to recommend Harmonix Music VR when there are several other games available to rhythm gamers at launch for PSVR including Thumper and Rez Infinite.