Space games sure seem to be a hot commodity these days. You have Elite: Dangerous for your exploration and dogfighting, FTL: Faster than Light and its DLCs for your rogue-likes, Star Citizen for all of your hopes and dreams of what you want a space game to be, and a dozen others to cover the various other aspects of life in space. But there aren’t many that focus on fast paced capitol ship battles. Enter Rebel Galaxy, a space western (think Firefly) with capitol ships that handle similar to pirate ships. With such a large number of recent space games, I’m always skeptical of the newcomers. I can now say that Rebel Galaxy did not disappoint. The game features a deep story and exciting battles between large ships, bickering factions which you can befriend or antagonize, chances to customize and upgrade your ship, everything you would expect from an action adventure space game.

One of the first things you will notice is the lack of a third dimension in your ship’s movement. Coming from other space games, this was a bit jarring to me at first; however, what I thought was an obvious oversight I soon realized was a great design choice. The design choices become abundantly clear when you encounter your first enemy ship and begin the gripping celestial ballet that is a broadside battle.

Picture pirate ships on the open seas, circling each other to maintain line of sight for their cannons. This is what it’s like in Rebel Galaxy except with higher caliber ammunition and lasers. You need to maintain the right angle in relation to your opponent so you can maximize you damage output. Similarly, you need to monitor your shields and possibly sacrifice some offensive capability to let your starboard shields regenerate. As if positioning and throttle weren’t enough to think about, you need to manually control one of your firing systems, be it the slow yet powerful broadside cannons or your secondary and tertiary systems which you can customize into more specialized weapons. Personally, I opted for the mining lasers so I could knock out shields with my broadside cannons and melt through their hull like a hot knife on butter. Whichever firing systems you don’t have control of the others auto-target and fire automatically. This is a big help as the camera controls change based on which system you have selected. Often times I found myself being fed up with the camera after ramming into an asteroid or being ambushed by a fighter I never saw coming. Still, if you can manage the controls it’s a very satisfying experience.

“The design choices become abundantly clear when you encounter your first enemy ship and begin the gripping celestial ballet that is a broadside battle.”

The game does offer alternatives means to completing missions besides combat, but honestly the combat is highlight of the game. I feel like this is where Rebel Galaxy has a bit of an identity crisis. After the first few story missions, I decided to try some missions posted at one of the quest hubs. Deliver a few widgets over here, kill some outlaw over there; these mindless tasks are nice for a few extra credits, but it started to feel like the kind of grind of an MMO just without all the other people. Some gamers out there like fetch quests and hunting an outlaw with no explanation other than they’re bad, and that’s ok (I do too sometimes). This simply causes a pacing a problem in a game that’s excels in capitol ship battles. I would consider this more of a problem if the story missions weren’t interesting, but fortunately the main quest line has enough of the non-combat mechanics to keep those space pirate pacifists content. 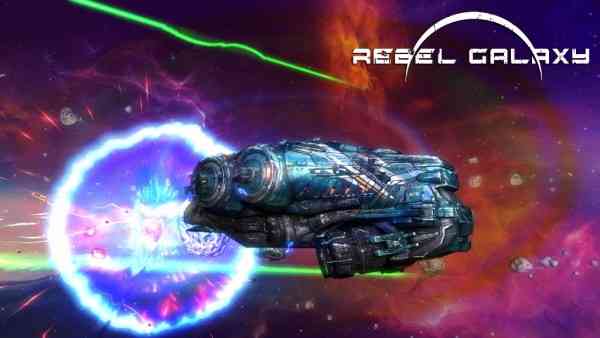 I would be remiss if I didn’t mention the overall aesthetic of the game. The visuals for entering and exiting warp are impacting but not over the top, something I appreciate if I’m going to be in and out of warp a lot. The sky box (err, galaxy box?) is stunning as well and makes a great serene backdrop for your grand battles. And then there’s the music. I’m a sucker for some well-done dynamic music. Every time you spin up the warp drive, this outlaw Western rock starts playing to match the exact moment the warp kicks in. It makes you feel like you just left the saloon, hopped on your iron steed, and are ridding off into the sunset for your next adventure. Admittedly, I could see some people getting tired of the music but I think it really ties the whole theme of the game together nicely.

Overall, Rebel Galaxy is a welcomed newcomer in the family of space games. The physics might not simulate space very well, but I see that as more of a creative liberty taken to make the rest of the mechanics much more enjoyable. The broadside battles between capitol ships make the combat feel epic, and I’m excited to see what more the devs can do either with this game or their next. 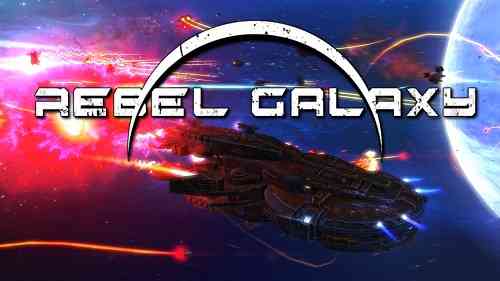