Let’s play a game. We’ll call it “Which Game Is This?”, and you’ll guess what I’m talking about. A hooded figure crouches behind some boxes while an angry crowd rabbles about injustice before some political figure. Mr./Mrs. Hood springs into action, picking their way through the crowd before acrobatically wiping out several heavily armed guards and plunging a wrist mounted knife into the figurehead of injustice. Is this Assassin’s Creed? Assassin’s Creed II? Brotherhood? III? IV? Unity? Yes.

Every Assassin’s Creed game has this scene baked into it’s storyline, and why not? It’s exceptional trailer fodder, and is an undeniably badass thing to do in a video game: sticking it to the man, literally. This year’s instalment – Syndicate – is no exception. But does it push the series forward in a meaningful way?

In 1868 London, the Templars (yep, still those guys) are overseeing the Industrial Revolution and subjugating the populous in every imaginable way. Oppressive gangs smother the masses in every corner of London, with a few beautiful people reaping the rewards while claiming to be interested in the betterment of society. As you might expect, it falls to our heroes to take back the city for the people and smash the Templars. What you might not expect is that the story and characters in Assassin’s Creed Syndicate are absolutely brilliant, and their charming interactions are far and away the best part of the game.

Evie and Jacob Frye are twins, and as such the story has a component of sibling rivalry. It’s well done – the tension between the two feels natural, but their unconditional love still shines through. Supporting characters are massively varied and expertly crafted. From fictional characters like Henry Green and Crawford Starrick to historical figures like Charles Darwin and Florence Nightingale, Assassin’s Creed Syndicate does a marvellous job of making each character’s personality shine through.

“The story and characters in Assassin’s Creed Syndicate are absolutely brilliant, and their charming interactions are far and away the best part of the game.”

The overarching Assassin’s Creed storyline has come off the rails since *SPOILER* Desmond kicked the bucket under strangely alien circumstances *END SPOILER*. Sadly Syndicate doesn’t do much in that regard, with a few modern day scenes that mail it in pretty badly – if anything, they broke me away from the much more immersive historical setting. In the future, these games need to swing hard one way or the other. Either go all in and integrate modern times meaningfully, or pitch it entirely – the shoehorn method used in Syndicate serves only to dilute the experience.

The setting of Assassin’s Creed Syndicate is extremely well done. Industrial London looks incredible, with all the recognizable landmarks intact and highly detailed. Scaling St. Paul’s Cathedral or strolling around the British Parliament are memorable, and encouraged exploration of the city just to take it all in. The atmosphere it provides is impressive from a visual standpoint certainly, but closer inspection reveals significant blemishes. 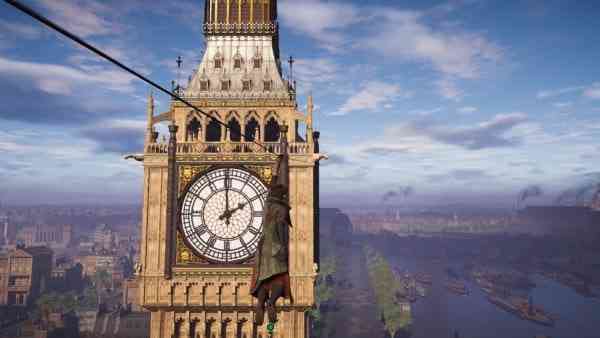 It hurts me to write this when it does so many things right, but Assassin’s Creed Syndicate just plays poorly. My main beef is control. Assassins are supposed to be these smooth, ultra fluid parkour masters, but they handle like semi trucks on ice. A sense of weight is one thing, but Jacob and Evie constantly get hung up on geometry, snap into cover, and make insanely high profile jumps when all you want to do is drop off a ledge. This has been an ongoing issue in the series, and although the above happen less than in the past, they’re still present and detract from the flow of the game. Movement in general feels amped up from past iterations. Long distance jumps feel longer and more detached from gravity – it helps the game move faster, but at the cost of believability. Other additions like the rope launcher ought to be magical (and are at times) but are completely inconsistent. Syndicate clearly has some logic as to when the launcher can be used, but it remains mysterious to me even after dozens of hours. Sometimes, ziplines can be deployed while on the move (say, between rooftops), but in other cases, the prompt refuses to appear unless you stand completely still facing a specific way. In other, even more confusing instances, ropes will attach to structures nowhere near the screen centre (where presumably you ought to be aiming). It’s befuddling, and I can’t help feeling that the feature could have used more development time. 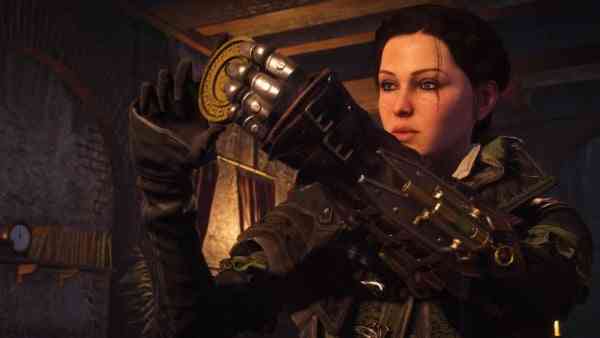 My other problem is with realism, specifically relating to AIs. In short, they are absolute nincompoops and simpletons. Assassin’s Creed Syndicate has a frequent stealth focus, and the AI is far from realistic. At times, peeking out from a corner can instantaneously alert every enemy to your presence, even if they are out line of sight, while throwing a knife into a guy’s head usually goes entirely unnoticed. AIs also seem oblivious to sound. Bystanders are often yelling loudly for the guards or otherwise commenting on your exploits in terrified fashion, but are ignored by enemy characters. In short, it’s extremely frustrating to have carefully planned stealth get torn up by weird AI cues, only to have ridiculous cheesy methods completely flummox the dunces.

Missions in Assassin’s Creed Syndicate are largely variations on previous instalments with the exception of carriage missions (or Grand Theft Carriage as I began referring to it) which are new to the series. Some of the most terrible missions from previous games were tailing or eavesdropping assignments. Both are still present here, as are missions to rescue people and scale tall structures. Collecting tons of things and building a gang are additional side activities, but have little bearing on the progress of the story beyond a base level. The amount of content in the game is large, but repetitive outside the main quest line and some of the ‘memories’ missions involving historical figures.

“Some of the most terrible missions from previous games were tailing or eavesdropping assignments. Both are still present here, as are missions to rescue people and scale tall structures.”

The marquee assassinations are the standout exception, being both inventive and unique. Most give the option of several paths to your target, ranging from direct assaults to fantastically unique approaches such as pretending to be a corpse. It’s a shame there are only a handful of such missions, as they contain the best payoffs in the game.

Evie and Jacob are said to have different approaches – Evie favouring stealth, while Jacob is more direct. Sadly, this is mostly applicable to personality, as they share a skill tree with a only few unique skills for each. They play largely the same, and can even equip the same weapons. While I appreciate the option to play as either for most of the game, in a practical sense it doesn’t really matter who is on screen. 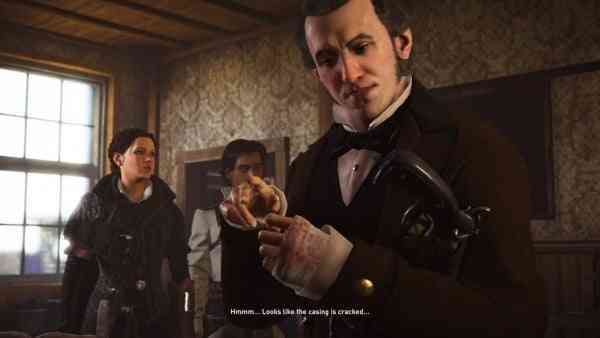 Unity came in pretty hot, and by that I mean it was a complete dumpster fire that barely functioned in several key ways. Assassin’s Creed Syndicate avoids that particular fate for the most part, but is not without issue. I experienced several hard crashes directly to the PS4 dashboard, while transitions between loading and gameplay were often black screens of 20 seconds or more, during which I pondered my existence and whether the game had locked up. Loads in general are very long – over 1 minute to initially load the world, and 30+ seconds to reload after dying. Technical performance is sketchy too – the framerate hovers around 30 generally, but dips down much lower than that quite often.

“Transitions between loading and gameplay were often black screens of 20 seconds or more, during which I pondered my existence and whether the game had locked up.”

I’d be remiss to not mention microtransactions. Assassin’s Creed Syndicate has them. They aren’t necessary, but they are available in a sort of pay to win fashion. Crafting materials, experience points, and in game currency can all be purchased for real money, with $5 getting you a small amount of one of the above. Microtransactions were disabled prerelease during my time with the game.

At the end of the day, Assassin’s Creed Syndicate is a fantastic game trapped inside an archaic one. Throughout my play I had the sense that Ubisoft desperately needs to scrap old code and take a fresh approach with this franchise. The story and characters in Syndicate are too good to deserve being dragged down by the game’s core circa 2009. It’s like any software – eventually the code base is so bloated that a rewrite is the only option, and that’s where Assassin’s Creed is now. If you love a good story and an historical setting Syndicate is definitely worth playing, but the core mechanics drag it down to the point of only being recommendable with reservations. 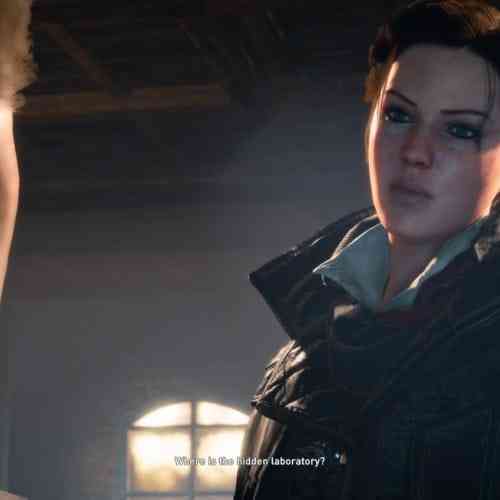 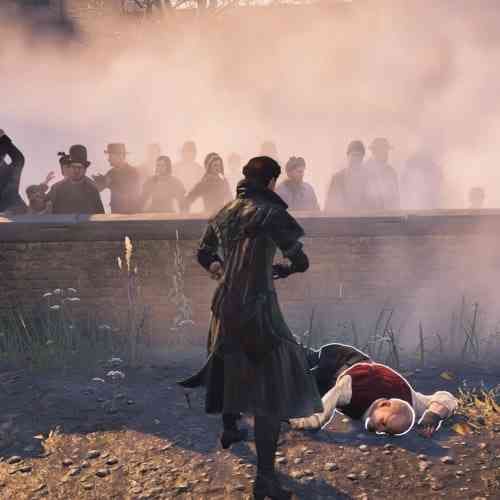 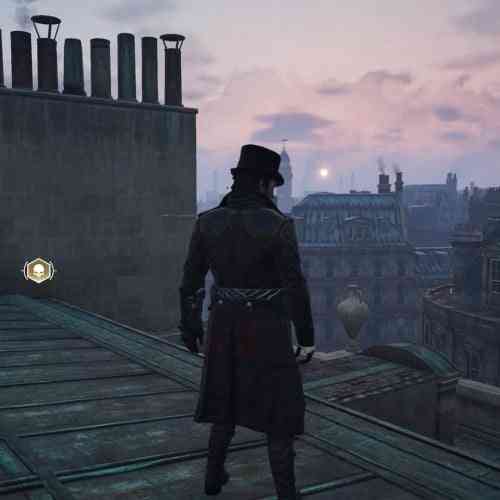 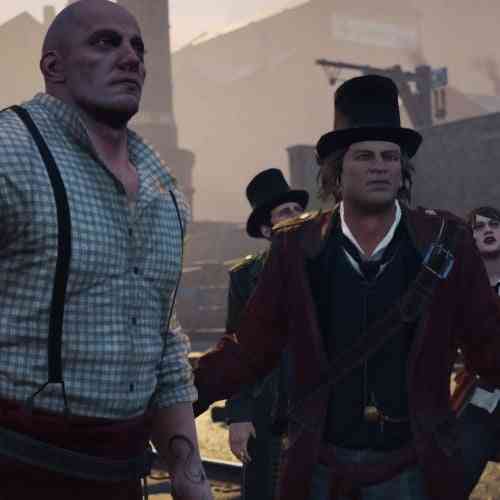 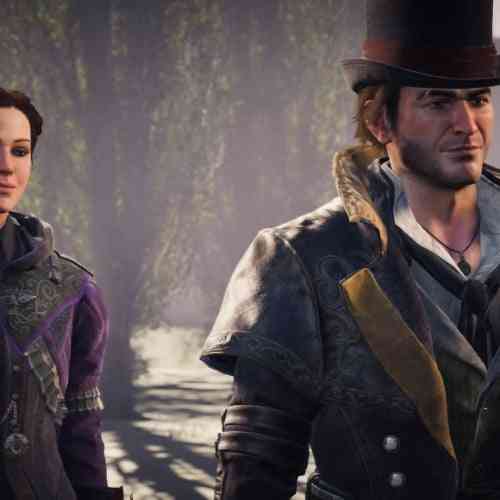 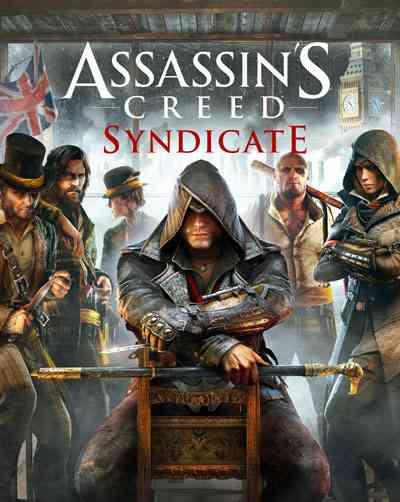