At one time, Mars held a mystical and mysterious allure for us Earthlings. We saw its red, lined surface from afar, its size so similar to our own planet’s, and imagined that all sorts of crazy-looking and maybe scary aliens lived there, had an advanced civilization and might even threaten us someday with conquest. Welcome to Offworld Trading Company.

Now in 2016, so much has changed. We have sent probes that have photographed the Red Planet’s surface almost as accurately as Earth’s. There have even been several unmanned landings that have shown us Mars from the point of view of an inhabitant. We’ve also seen Total Recall, and that crazy 3-breasted prostitute (there are some images you just can’t unsee). And it turns out, after all of that, the real Mars is just a big desert planet with red sand covering most of it, and (so far) no life to speak of, much less to fear.

Offworld Trading Company, now on PC, is a RTS/simulation game that imagines the colonization of Mars as it likely will happen someday – a pretty mundane mining of the planet’s resources by corporations. Developed by Soren Johnson, the designer of  Civilization IV, Offworld Trading Company actually looks to be more influenced by games like Starcraft, Settlers of Catan, the classic Alpha Centauri, or even Stock Market board games. Overall, this is a fun game with fresh ideas for the RTS genre, and while it has some drawbacks, it is definitely a game any fan of classic RTS’s should try out.

“Overall, this is a fun game with fresh ideas for the RTS genre, and while it has some drawbacks, it is definitely a game any fan of classic RTS’s should try out.”

In Offworld Trading Company, you play the role of the CEO of a mining company looking to do business on Mars. Your objective is to mine the planet, collect various resources, and build up your cash reserves and stock price. You win the game not by sending military units to crush your enemies, but by using cash to buy them out.

There is a lot of stuff to learn with Offworld Trading Company – but if you’re like me and flunked out of your MBA program (again, sorry Mom and Dad), you can still pick it up with some diligence. The game does do a good job of training you to be a successful CEO, with a very thorough Tutorial, which seems to cover every possible scenario you might face later. If you still don’t feel confident after that, you can continue with the Campaign Mode, which assigns you new scenarios and objectives in a similar way to the Tutorial. At some point, you might feel like a Martian Steve Jobs and want to take on other companies in the skirmish mode. That is really the meat-and-potatoes of Offworld Trading Company. 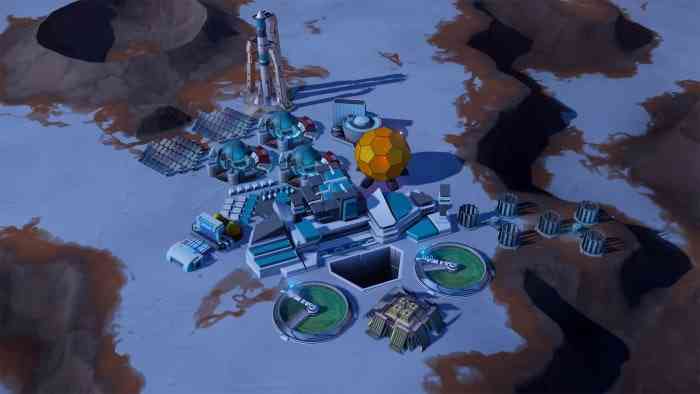 To win at Civilization, Starcraft or most RTS’s, you need a strong military. In Offworld Trading Company, there are not tanks, planes or missiles – but that doesn’t mean it’s not a war. Oh, it’s still an intense Darwinian fight for survival, but here your weapon is cold hard cash. Cash is used to buy other players’ stocks, manipulate things on the Black Market, and other actions. You get it by mining resources and selling surplus quantities on the market. The race to develop your base, set up mines and extraction points on the Martian landscape, and expand your territory (“stake claims”) follows familiar RTS territory; you quickly settle into a pattern of “you need this before you can build that, then this unlocks which allows you to level up your Headquarters, so you can mine these other things”; the gameplay of Offworld Trading Company will feel intuitive and natural to RTS players and getting into the game is quick and easy. Much like my beloved Civ 5, it seemed like I had just started Offworld Trading Company and I realized it had been an hour already.

To win at Offworld Trading Company, you need to buy out all your opponents’ companies and make them subsidiaries of your own. While that might be a simple criteria for victory, you soon find that this game requires some sophistication in strategy. For one thing, some resources sell for much more than others, because they are more important. You need Aluminum, Steel and Glass to upgrade your Headquarters and build other buildings, so a lack of them can be fatal. If one player gets ahold of a lot more of these than anyone else, they have a huge advantage.

“Monitoring your growing corporate mining empire is fun, especially at first, with lots of building, expanding, and stockpiling mined resources.”

To get these more valuable resources, you soon realize that there are steps you have to take. Glass, for example, cannot just be harvested; it requires Silicon (ie. Sand) as a Primary Resource before it can be made. This is only one example of the layered aspects to the game’s strategy that resemble the Tech Trees of Civilization but are even more complex at times. Offworld Trading Company is a well-thought-out game that demands your full managerial attention if you want to succeed.  It also makes for many ways to play, depending on what resources you decide to build your business on.

Monitoring your growing corporate mining empire is fun, especially at first, with lots of building, expanding, and stockpiling mined resources. It is reminiscent of the best RTS games, with a visual reward of seeing your colony grow and expand its claims, taking over more territory over time. But the fun wanes somewhat, unfortunately. One major reason for that is the fact that, after the main growth period is over, playing the game then mostly becomes watching and monitoring the statistical aspects, such as resource and stock price, on the left-side panel. As much as it is a thrill to frantically buy and sell resources, to see your bank account explode, or your stock price skyrocket, it can’t ultimately overcome the dullness of managing numbers, paying down debt and buying company stock on a static screen. Hell, that’s why I failed my MBA in the first place.

It’s almost like the developers realized that gameplay was lacking somewhat, and added some “twists” to spice up the experience. For example, you can use the Black Market to cause Power Surges to knock out your competitors’ bases, or cause Mutinies to disrupt their production. There are actually a ton of different sabotage options to choose from. You can even hire Goon Squads to protect yourself against all the dirty tricks your opponents might throw at you. All these added elements do help to keep you on your toes, but only to a certain extent. I must say that I missed the excitement of fighting it out with tanks and infantry, or laying siege to my opponents’ bases. There’s something to be said for a good ol’ war to settle things once and for all. 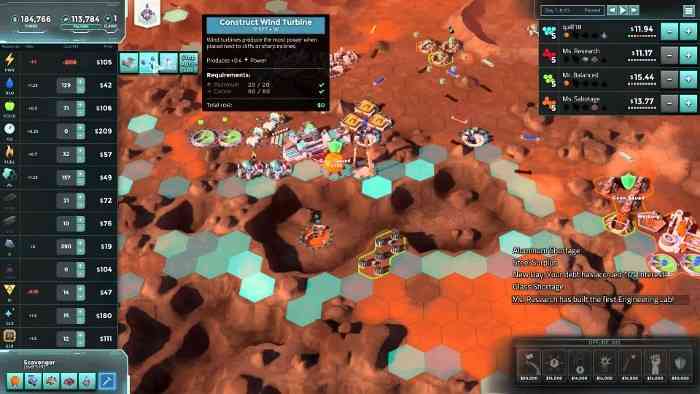 Overall, I felt that Multiplayer in Offworld Trading Company was an experience that was definitely fun, but should have been even more fun than it was. Even though you are playing against other competitors, and there is a pretty intense struggle for financial victory taking place, it felt oddly solitary as well. Without direct conflict in the form of war units, matches seemed to be missing some impact. In a combat-based RTS, there is always a direct and clear indication of how you compare against your opponents – when you see that massive task force of warships heading towards your capital, it is pretty damn obvious that your ass is about to get smoked. In Offworld Trading Company, you might be humming along nicely, and suddenly find yourself bought out, and the game is over. You lost. That happened to me sometimes. While on the plus side, matches are often quick and snappy, there is a feeling that you lack complete control over your own fate at times.

Visually, Offworld Trading Company is very polished. Bases and buildings exhibit a level of detail and quality that you would expect from established franchises like Civilization of StarCraft. The Martian landscape, while realistically rendered, is a bit dull and almost too-faithfully represents the rust-colored, sandy surface of the Red Planet. Exploration, a hallmark of many RTS games, is present here for sure, but tends to be just a businesslike search for new resource nodes, rather than an opening up of a mysterious land for curiosity.  This is what ultimately turned me off of Sid Meier’s Alpha Centauri back in the day, and in Offworld Trading Company, while the visuals were very well-done, the unvaried, monochromatic nature of the world grated on me a little bit, but granted that was after hours of playing.

Offworld Trading Company is a good game, with some solid gameplay mechanics, polished visuals and intuitive controls. While the financial race at its heart has a lot of fun aspects, ultimately the game needs a bit more to spice up the mining-management sim that it becomes over time. But Soren Johnson and Mohawk should get lots of credit for attempting to bring something new and innovative to the RTS genre, and there is lots of fresh content to make getting your ass to Mars worth the trip, even at the relatively-steep $43.99 on Steam. 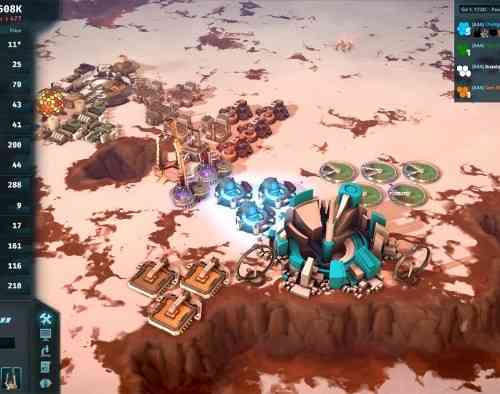 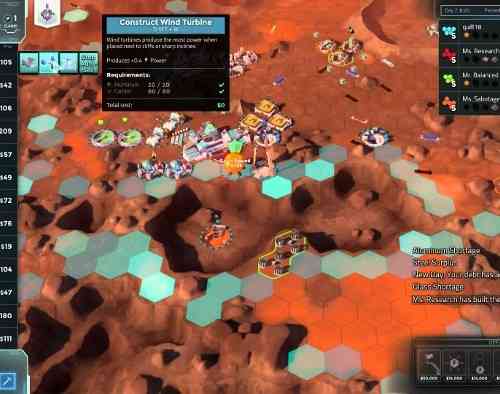 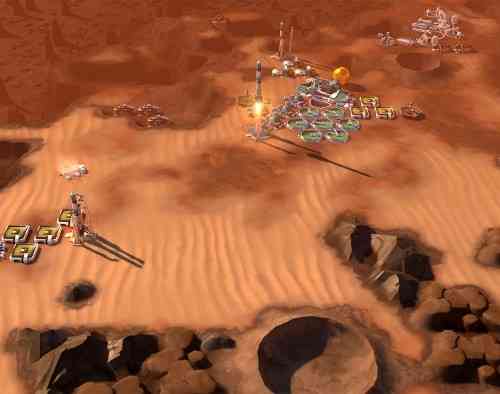 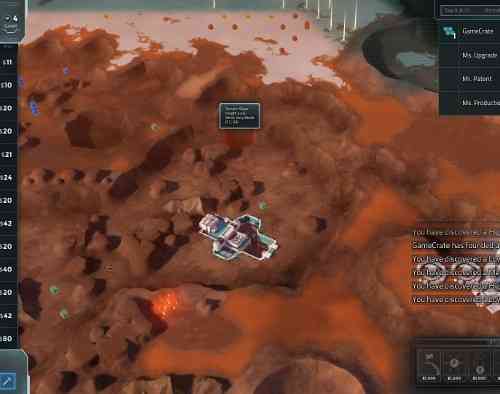 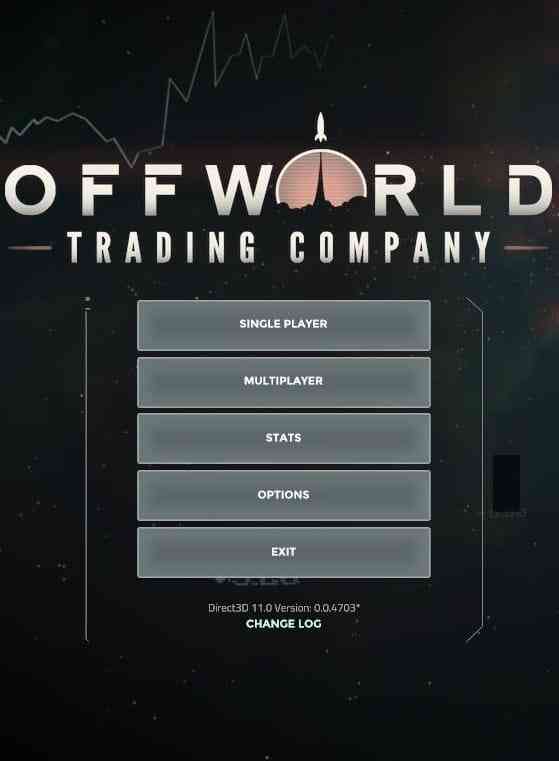 Company Of Heroes 3 Will Focus on Storytelling With New Features