Good Things Come In Small Packages With The NUC 9 Extreme

Intel is usually known for processors. Duh. For most of the last 20 years, they’ve absolutely squashed the competition with vastly superior performance, especially in games. Once in a while, they branch out. First, it was with screaming fast SSDs, and then it was the tiny NUC line of PCs. I’ve been using their latest – and hardest core – tiny PC for a couple of months now, and though I like the NUC 9 Extreme an awful lot, I have no clue who it’s actually for. Let’s unpack all that.

The NUC 9 Extreme – spookily known as Ghost Canyon – is really, really, small. At about 9 inches square and less than 4 inches thick, it has less internal volume than a PS4 Pro. But what you can pack into that tiny frame is beefy enough to rival the next-gen consoles, and at a fraction of the size. 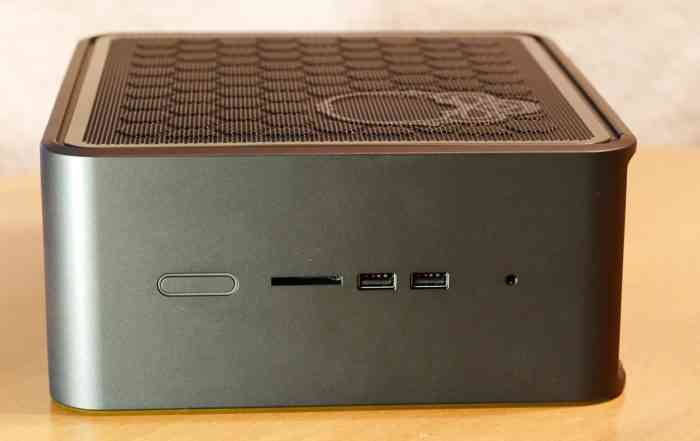 My review unit (a NUC9i9QNX) arrived as it would from a retailer, without RAM, storage, or a GPU. A perfect opportunity to tear apart a brand new piece of equipment! It’s remarkably solid feeling. Panels and clips all feel super durable, and getting the system apart is a piece of cake. Inside, the user replaceable components are amazingly easy to access. A 500w 80 Plus Platinum power supply is somehow wedged into the bottom of the case, so there’s no external brick to worry about. The CPU and GPU fit into a pair of PCI-E slots on the miniscule main board, allowing users to change out the CPU unit later. As it stands, it’s running a Core i9 9980HK at 2.4GHz base, boosting up to 5.0GHz. I added 16GB of 3000mhz RAM, a couple of m.2 NVME drives, and a Zotac 2070 Super into the mix, though the GPU needed a slight, ahem, fan shroud modification (read: I hacksawed part of it) to clear the frame. The NUC 9 is clearly intended to only have single 8 pin GPUs installed, but there is an additional PCI-E power lead on board. With a great deal of trial and error, I managed to fish it around, plug it in, and close everything back up. I will say though, if you’re going to go rogue on the GPU front, find an L style PCI-E extension to ensure you have good clearance everywhere.

Fully kitted up, there are precisely zero microns of empty space in the case. It’s a pretty remarkable engineering feat to have such an efficient package, but retain excellent accessibility for hardware changes and repairs. The case is classy looking too, free of lighting and embellishment except for the ghostly skull logo on the side panel. It looks outstanding, and definitely worthy of being on a desk rather than under it.

Connectivity-wise, Wifi and Bluetooth are baked in, and the number of ports available is excellent with a bunch of USB 3.1 connections, and a pair of Thunderbolt ports. For all intents and purposes, this tiny machine can act as a full desktop replacement. 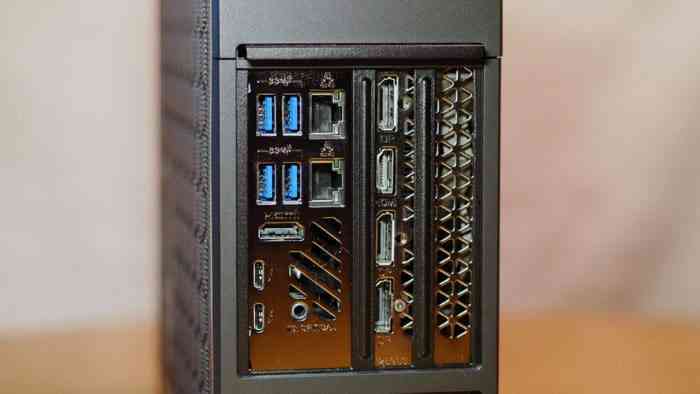 But How Fast Is It?

If you’re looking for an ocean of benchmark graphs, you won’t find them here. I’m more interested in how this thing actually feels to use. Average daily tasks are screaming fast thanks to the storage setup. 2.4GHz sounds too slow, but in practice the system hovers above 4.5GHz in most cases. I played a bunch of recent games to see how it felt compared to my usual machine, and I’d honestly have a tough time telling if I couldn’t see the box. Control, Death Stranding, Gear Tactics, and Cities Skylines were indistinguishable from my usual system with the same GPU. Flight Simulator is the latest thing making CPUs cry, and the NUC 9 handled it admirably, hovering around that 4.5GHz clock while delivering ~30fps at high settings in 4k. Ditto for heavy CPU loads like the Adobe CC suite, where things stayed stable during heavy rendering loads, and showed off render times not far off my usual Ryzen 7 setup. Is it slower than a watercooled, heavily overclocked beast? Absolutely. But the NUC 9 fits into a standard size lunch bag, while my tower PC weighs a ton. If you’re someone who likes to sit at a desk going crosseyed playing Civ 6, but find the idea of playing Flight Simulator in your living room equally enticing, AND you only want one computer, you might be the target audience for the NUC 9 Extreme.

The machine definitely heats up, with CPU heat values around 90 degrees C being pretty common at the limit. Thermal throttling, though? Not much of an issue. Only very rarely did I record a clock below 4GHz, and my GPU managed just fine in the tight quarters. Chalk it up to the fully mesh sides. The built in fans are unfortunately far from silent, with a distinctly audible whine even at idle. It’s far from PS4 Pro levels, but noisy nonetheless. 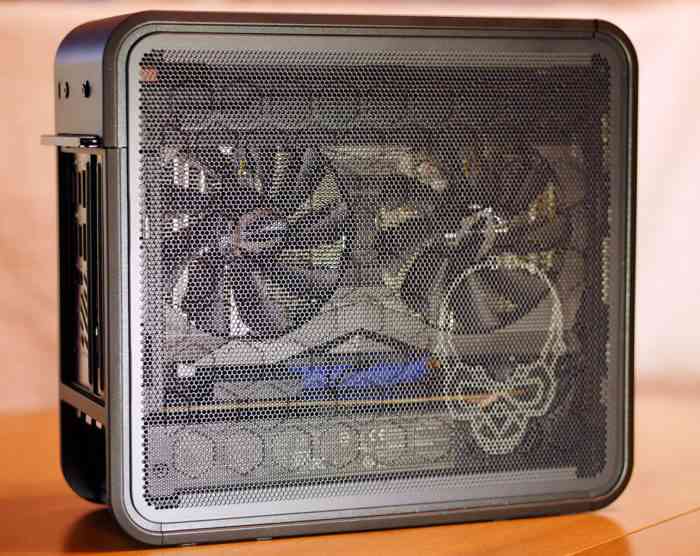 So returning to my initial question, who’s this thing actually for? If it’s for living room gamers, the value proposition is iffy. Loaded up with the necessary components, you’re looking at around $2k for a NUC 9 Extreme. With my 2070 Super, it’s delivering around 9 Teraflops of graphical performance – enough to hang with the next gen consoles (Yes, I know that teraflop numbers can’t be compared 1:1 between architectures, but I’m ballparking here). Once mini 30 series Nvidia and 6000 series AMD cards land, it’ll be possible to comfortably jump ahead of the PS5 and Xbox Series X.

Let’s be real. The NUC 9 Extreme is an extremely well put together machine. It’s a premium product, designed to look cool, be tiny, and still do all the things you’d expect a PC to. It’s a narrow, niche market, but the NUC 9 Extreme does those things just about flawlessly. Then again, for $2k you could also buy both next-gen systems, a Switch, and a boatload of games. Which path is best? That all depends on you.