I’ll come right out and say it. Star Renegades is a rogue-lite, run-based game in the style of some gritty Saturday morning cartoon. With that out of the way, you should be good to decide on whether or not this game is for you. However, I’d be remiss to not point out a lot more. In fact, there’s a lot going on with Star Renegades, so if your interest is piqued, let’s dive in.

Star Renegades takes place in a far flung future where people and mechs are synonymous with blowing stuff up. You start out as a plucky brother-sister duo and quickly expand the roster from there.

Each run takes place in a unique version of the same universe. Similar to Into the Breach, a tiny robot travels from world to world, hoping to impart the learnings of the fallen to the new versions of the same heroes after each defeat.

The runs themselves are somewhat procedural in terms of loot, enemies, and bosses you encounter. This keeps things fresh and I often found myself looking forward to the next run, even after a crippling defeat. Each run will also introduce you to new party members as you go along, which changes up the combat quite a bit. And holy moly, that combat. 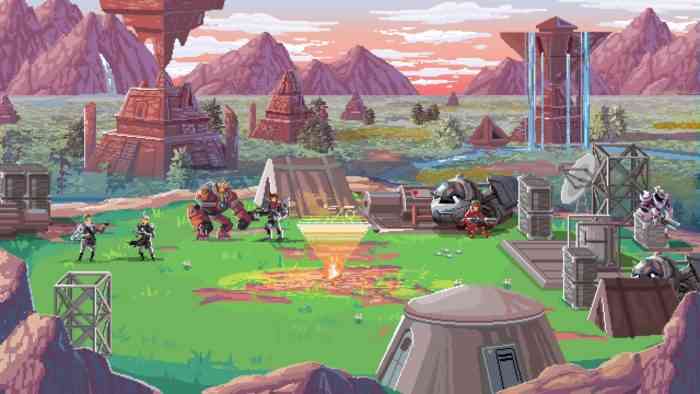 Battles take place on a typical side-by-side plane. It looks immediately like other turn-based JRPGs you’ve played in the past, but everything an enemy will do is plotted out on a timeline. Your goal is to not just damage enemies, but to exploit the timeline to your advantage. Some abilities are faster than others, which will give you a crit on an enemy (along with other possible effects based on equipment). When you crit an enemy, you knock a point off their stagger count. Get those points to zero and the enemy “breaks,” pushing him out of this turn into the next.

So while it’s straightforward to start, Star Renegades does a solid job of building on that premise with abilities and gear. My favorite party member was a sly gunslinger who could teleport bomb enemies to break them instantly. It did no damage, but lined up my heavies perfectly so I could pound the enemy into dust.

While enemy attacks are telegraphed down to who they’re attacking and when, you won’t be able to prevent all damage. Trickier battles become a delicate dance of what damage are you willing to take to get the upper hand. This give-and take-creates tense decision points of sometimes even sacrificing a party member to finish off a boss. 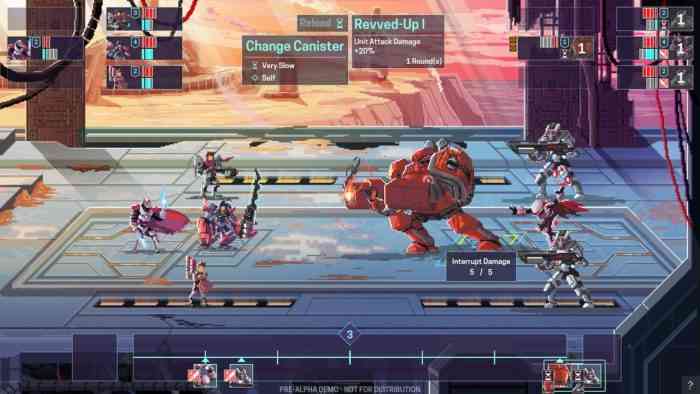 It’s addictive, it’s dense, and by George it looks glorious. Each attack, parry, explosion or laser shot is masterfully animated in such over-the-top detail one would imagine needing sunglasses to watch them unfold. Enemies light up the screen with gunfire while your sword-wielding heroes twirl across the battlefield to meet them head-on.

Need a heal? Your robot party member can drop a shield boost on you that feels like a shockwave when it goes off.

The animations will pull you in and the mechanics will keep you there.

Between fights, you’re left to camp a la Darkest Dungeon style. In these little rests, your party members will share abilities to heal and buff themselves. There’s an added bonus of relationship building that unlocks unique story bits for each hero as they get closer, as well as other passive bonuses.

After camping, you return to your run to try and figure the best path on the map that will score you the most opportunity for loot while at the same time targeting enemy Generals that need killing. 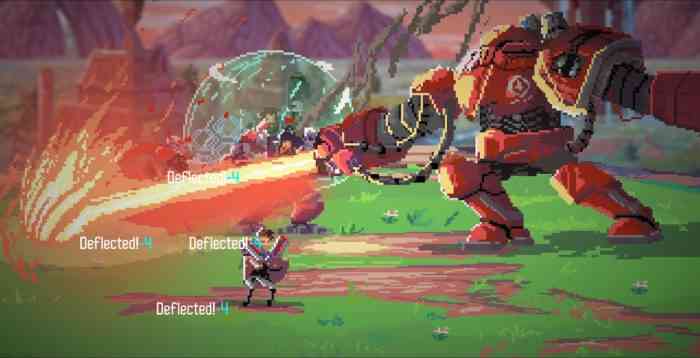 The only parts missing for me were the voice acting and some more pieces between battles. While the camping is a nice feature, I would’ve loved something deeper outside of combat that goes beyond just equipping loot and buffing.

The randomization keeps things fresh, but can also leave your party at a disadvantage. Some runs can fail to give up the items you need to succeed, making it rough from the get-go. Overall, this didn’t trip me up too much, because if you go again and persevere, that feeling of overcoming all odds will eventually sweep you away.

Star Renegades is a love letter to tactical RPG fans who have been craving a rogue-lite experience that keeps on giving. While not quite at the mastery of Into the Breach in terms of depth, Star Renegades has enough to be excited about.

We Need More RPGs Set in Space
Next Witcheye Review – An Ingredient for an Ingredient
Previous NUC 9 Extreme Review – Outstanding, But For Who?