Witcheye is a colorful retro-style platformer developed by Moon Kid and published by Devolver Digital.  You play as a witch whose spell ingredients have been stolen by an enterprising knight. The form that you move takes shape as an eyeball…you know…a witch’s eye…get it? (cue groans). As this witch-eyeball, you’re able to stop and start your progress with any button, which you can use to your advantage as you move through the classic platforming levels.

The controls are simple and easy to understand. On the Switch, those controls are pretty much just moving around and stopping when you need to strategize. Again, you can do that with any button, so it’s easy to pick up and start playing. I liked the controls on the docked Switch better than the handheld, as I found myself frustrated more often whenever it wasn’t hooked up to the TV.

You move around the world and defeat enemies by bouncing into them, which gets harder and harder as you have to do so in more difficult ways. Most of the time, though, it wasn’t the enemies themselves that stumped me but the diamonds that serve as collectibles. There were several times that I went back to a level to try and find the last diamond, only to give up defeat after bouncing into every surface I could find. Maybe I’m just a failure, sure, but I wasn’t a failure who felt like I could reasonably get all the collectibles. 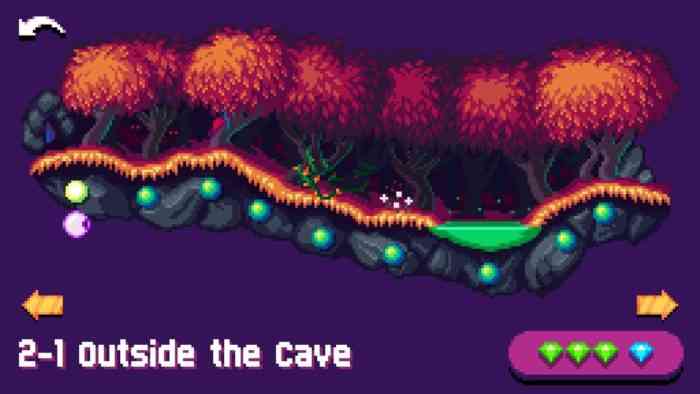 As a Switch game, Witcheye felt a little simplistic, and I wasn’t fully engaged with what was happening all the time. But the game is also out on iOS, and I think this game is probably a fantastic mobile game, as well as a great game to have undocked and portable. I found the slightly mindless repetition of the levels to be perfect when I was trying to concentrate on a podcast or half-watch a TV show. It makes me wish I’d played it on iOS, because I think it would excel there.

The visuals of Witcheye are a big step above average mobile game graphics, although, again, they were a little simple on the Switch. There are all sorts of fun things to look at that often work in tandem with the gameplay, like orange trees that rustle and hide your enemies from your sightline. Sure, it’s nothing completely new, but I really liked the design of the witch and the visual juxtapositions of a lot of the colors.

The opening is short and cute, setting you up to understand the pretty minimal story that’s going on here. For this type of game, though, I don’t need a huge story, just something to push me through the stages. And as long as I had something to put on in the background, I was motivated to play and had a good time doing so. If it was still normal to go outside and travel places, I’d recommend playing this on public transport.

Witcheye is fun, and it’s cute, and it’s got some great visuals and a cool control system. I think it’s the perfect game to vibe to something else with, which is a type of experience that everyone with a short attention span like me needs. Everything it fails in is simply due to being a game designed for another platform, and so I heartily recommend buying Witcheye…preferably on mobile.