This year marks the 35th anniversary of gaming’s most prominent, princess-saving plumber, Super Mario! To mark the celebration, Nintendo has seen fit to re-release three iconic Super Mario 3D platformers in one amazing collection for the Nintendo Switch. Included in the package is Super Mario 64 (1996), Super Mario Sunshine (2002), and Super Mario Galaxy (2007). All three of these games are widely considered as some of the greatest platforming adventures ever. Each game brought an unrivaled quality that would bring countless hours of enjoyment for gamers. For those that experienced these games first hand, this is an opportunity to experience full-fledged nostalgia in a convenient package. For those that didn’t, this is an opportunity to experience a level of greatness that still holds up to this day.

Super Mario 64 was Mario’s first foray into 3D platforming, originally released as a launch title for the Nintendo 64. Super Mario 64 would transport gamers into a brand new way of gaming, introducing gamers to all sorts of new gaming conventions, such as a thumbstick to move Mario around a 3D plane and camera angles to get a better view of the action. The story revolves around evil Bowser kidnapping Princess Peach and locking her away using the power of the Super Stars. It’s up to Mario to collect enough Super Stars to defeat Bowser and save Peach. While the game’s visuals are looking a bit dated with low poly characters and sparse environments, as someone who grew up playing this game, I can’t help but feeling overwhelmed by a strong sense of nostalgia. A couple things that still impress me is the amount of content thrown into this game – for a first-foray into 3D platforming, it’s quite incredible what Nintendo accomplished. For this Switch release, not a lot has changed from the original. The good news is that visuals do appear to be a more crisp, making use of the Switch’s ability to display higher resolutions. Unfortunately, the aspect ratio is still 4:3, like the original. I had really hoped Nintendo could have worked some magic to display the game in widescreen. Another disappointment is that the in-game camera has remains untouched, creating some awkward moments where you’ll be fighting the controls to find the right camera angle for what you’re trying to do. One final note worth mentioning is just how amazing Super Mario 64 feels with the Switch Pro controller – it’s buttery smooth and you’ll never want to go back to your old N64 controller again. 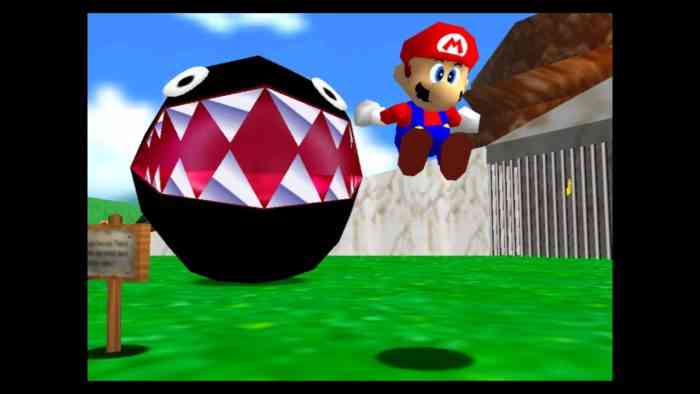 Super Mario Sunshine was Mario’s debut on the Nintendo GameCube. Interestingly enough, Super Mario Sunshine was not a launch title for the GameCube. Nintendo opted to give that honour to Mario’s bro, Luigi, in Luigi’s Mansion. Super Mario Sunshine begins with Princess Peach, Super Mario, and Toadsworth flying to the beautiful Isle Delfino for a much needed vacation. When they arrive, they discover a Mario imposter has been running around causing havoc and ruining the town with oily graffiti. The local police recognize Mario as the culprit and sentence him to clean up the mess he allegedly made. For this adventure, Mario will be equipped with a brand new Professor E. Gadd invention, FLUDD, an AI backpack that can spray the water needed to clean everything up. Visually, the game is a massive step up from Super Mario 64, that still largely holds up today. For this release, in addition to crisper visuals, Nintendo has taken a huge extra step to include a brand new 16:9 widescreen ratio. One of the biggest complaints about Super Mario Sunshine has always been the controls. The combination of controlling Mario while utilizing some of FLUDDs features can be quite daunting at times. Unfortunately, a lot of this boils down to game design, and while the Switch Pro controller definitely makes it feel a lot smoother, it still can be frustrating. Despite this, Super Mario Sunshine is still loads of fun and well worth a playthrough. 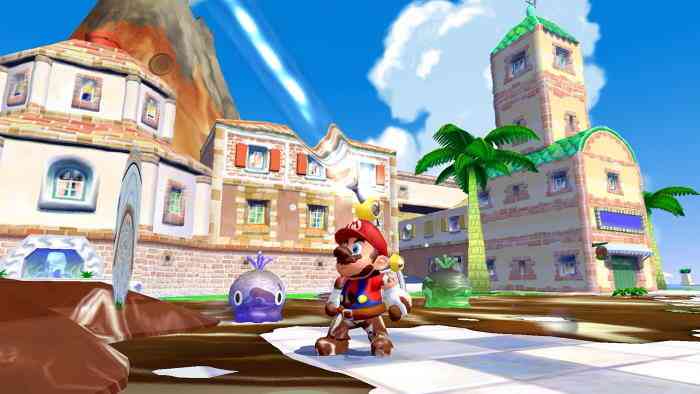 Super Mario Galaxy was Mario’s big 3D foray on the critically acclaimed Wii console. It was the first Super Mario 3D platformer to make use of motion controls, which added a fresh level of interactivity. Another key element to Super Mario Galaxy was it’s use of gravity to explore interstellar objects. Mario could literally explore fully 3D worlds – some were quite small, while others were incredibly large. While Mario’s move set was very reminiscent of his Super Mario 64 move set, there were a couple of new additions that made use of the Wii Remote. One was the spin move activated with the flick of your wrist while the other was the ability to aim and fire star bits from off screen. In fact, for the first time ever, a second player could join in the fun and take control of the shooting bits, which could stun enemies. For the Super Mario 3D All-Stars collection, Nintendo has seen fit to include a selection of new control options, such as handheld mode and Switch Pro Controller – which alleviates the need for motion controls. You’ll still need to aim and fire star bits, but in handheld, you simply tap the screen and with the Pro Controller, you’ll move the controller around which works surprisingly well. Visually, Super Mario Galaxy was a treat on the Wii, but it looks even more stunning now. I’m still in awe with how amazing it looks after all these years, it’s damn near Super Mario Odyssey quality. Super Mario Galaxy spawned a direct sequel, Super Mario Galaxy 2, which was vastly superior in every way and shockingly absent from this collection – hopefully Nintendo sees fit to release it in the near future. 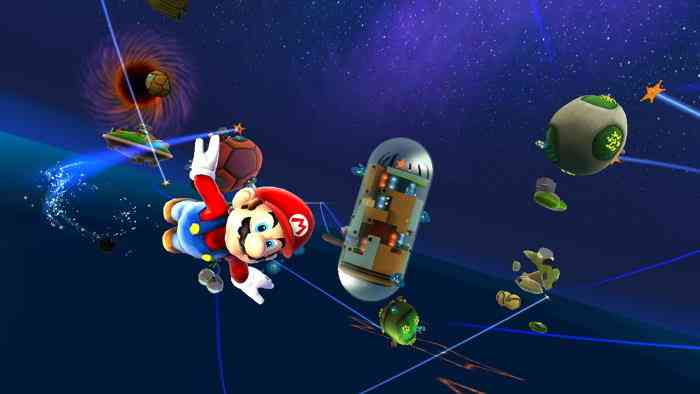 My biggest disappointment about the Super Mario 3D All-Stars collection is the minimal amount of added content. What is included is a massive, three game soundtrack that includes all the amazing music from all three games. You could use your Switch as a portable music player to listen to all the amazing Super Mario tracks, or just listen to them from the comfort of your couch. However, considering how much of a storied history these games have, it would have been awesome to have some sort of video retrospective discussing the impact these games had on gaming and stories from their development. Interviews with key individuals like Mario’s creator Shigeru Miyamoto, music composer Koji Kondo, and Mario’s voice actor Charles Martinet would have been outstanding additions. Even better would be some behind the scenes videos and pictures of the games in-development, possibly showing off characters, levels, et cetera that didn’t make it into the final products.

The Super Mario 3D All-Stars collection brings together three iconic Super Mario platformers, all with enhanced, crisper visuals. These games have never looked better. The added widescreen support for Super Mario Sunshine is a huge plus, but I’m disappointed the same care wasn’t given to Super Mario 64. There have been some minor improvements to the games controls, especially the added control options for Super Mario Galaxy. Some added quality-of-life improvements would have been nice, such as improved camera controls in Super Mario 64, but purists might appreciate the classic awkwardness. My biggest knock against this collection is the lack of added content. The soundtracks are a great inclusion, but I had hoped for more behind-the-scenes content or interviews. Another surprising exclusion is the lack of Super Mario Galaxy 2, and my only hope is that Nintendo has plans to re-release that gem at some point. Super Mario 64, Super Mario Sunshine, and Super Mario Galaxy are three near-perfect platforming adventures. In my opinion, they are must-play games that everyone should experience at some point, and what better time then now on the Nintendo Switch. 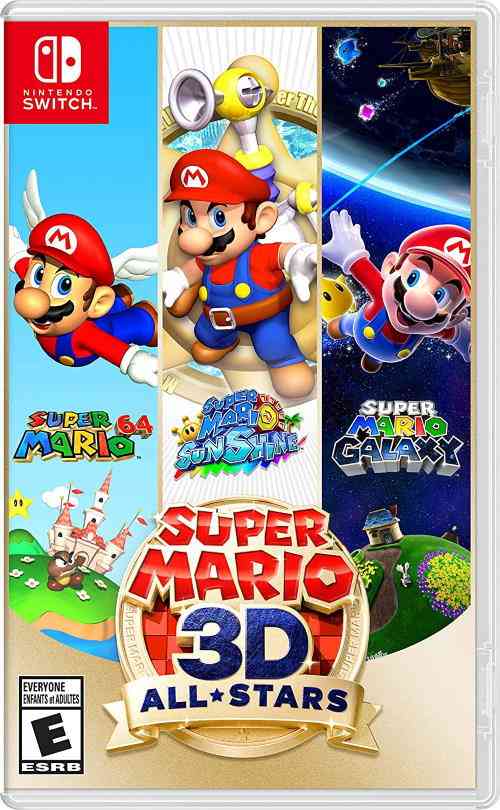 Our First Look At Pokemon UNITE Gameplay
Next NUC 9 Extreme Review – Outstanding, But For Who?
Previous INMOST Review – A Most Compact and Compelling Narrative