INMOST Review – A Most Compact and Compelling Narrative

Hidden Layer Games’ INMOST has finally released on PC and the Nintendo Switch after releasing on Apple Arcade late last year. Perhaps best described as a side-scrolling adventure title with heavy puzzle and narrative elements, INMOST was a surprisingly compact but memorable experience. Lasting between 3-5 hours, and able to be completed in a single sitting if so desired, INMOST respects the player’s time commitment.

INMOST tells the narrative through the perspectives of three controllable characters: a man, a girl, and a knight. Each character’s narrative is told separately, but interconnect at various lengths. In short (and in the spirit of avoiding spoilers), the game does not provide you with a great understanding of the plot at the beginning, and it is up to the player to navigate the various characters’ perspectives. While I fully expected a cliche and somewhat cheesy narrative to unfold, the game’s ultimate narrative was memorable enough to overcome some storytelling cliches. Overall, the game’s narrative was put together well, and made me think about what was happening as I played through it.

INMOST’s three characters have three vastly different methods of gameplay. For the man, the gameplay mostly revolves around platforming and puzzle solving. For the girl, her path is mostly told slow-paced and narratively, and is mostly an adventure title with some very minor puzzle solving. Lastly, the knight essentially follows a platforming-action path. His path is the most fast-paced, but is limited in terms of gameplay with three primary moves at your disposal: jump, attack, and a grapple hook-like mechanism.

Overall, the gameplay of INMOST was pretty spot on for the various sections. The platforming for the most part worked well, though there were some minor issues in terms of precision. The puzzles varied in difficulty, but nothing was overly difficult. Lastly, the knight’s action portions were easy, if maybe even a bit too simple. Perhaps the biggest issue I faced was when in control of the man, as wayfinding the next objective was at times unclear, causing me to go through the whole map again to try to find where to go next. Furthermore, various portions interrupted the flow of the game, such as solving multiple interesting puzzles in a row, only to be halted with a slower paced narrative section. 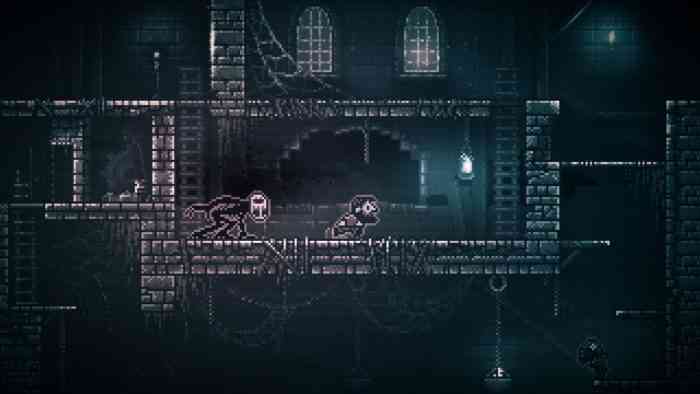 Although I first found INMOST’s colour palette a bit bland as most things were covered in a blue or green hue, a few different hints of colour and the impact of the colours themselves made me forget about this. In fact, the game’s pixel art combined with the beautiful backgrounds and colours were one of the highlights of the game. Furthermore, the soundtrack and voice overs of the game worked well, especially in combination with the graphics in order to set the mood and tone of the game.

INMOST was a pleasant surprise. The game was a short experience with a powerful narrative with effects that can last so much longer. As for the gameplay itself, the fun puzzles and collaboration with the story helped to bring the game to life. Speaking of which, the game’s audio and visual elements also worked well together in setting the tone of the game. Overall, all the elements of the game come together in the end, much like its narrative, to provide players with a strong package. To anyone contemplating purchasing the game, I leave you with the disclaimer found on the game’s Steam store page: “INMOST is an intimate story of loss and hope that some may find upsetting. Player discretion is advised”.