Ever since Sean Murray, of indie developer Hello Games, first showed off No Man’s Sky back in 2014, the game has captured the collective imagination of gamers in a way that is rare in the industry. The concept was instantly compelling: a realistic, almost infinite universe of real, fully-realized worlds to explore, discover, experience. It seemed that finally, the dream of exploring the galaxy from the comfort of your couch was no longer just a stoner fantasy. Whoa.

Since those early days, Sean Murray saw the hype surrounding No Man’s Sky’s anticipated release reach a fever pitch – much of it, in fairness, stoked by Murray’s own calculated coyness when asked what, exactly, the game was. A few people even threatened his life when he needed a few extra weeks to put the last finishing touches on the universe. That says a lot about how much anticipation there was. So, now that it has finally released, the big question is, does it live up to all that hype?

Of course it doesn’t. Admit it; deep down you knew it wouldn’t. Because it couldn’t. It could not have possibly been all the things we all wished it to be. However, after putting 20-plus hours into No Man’s Sky, I can tell you it is very good. It is a fun and engaging experience that, while it definitely is lacking in some aspects, is an impressive gaming achievement and one that should be experienced.

“It seemed that finally, the dream of exploring the galaxy from the comfort of your couch was no longer just a stoner fantasy. Whoa.”

You start the game off on one of the much-discussed “quintillions” of planets in the game’s procedurally-generated universe. Although you aren’t given a true Tutorial, it becomes clear pretty quickly what you have to do. The game knows what you want – to get out into space – and so it gives you a broken-down ship that you will obviously have to repair. You figure out easily enough that in order to fulfill your dream of being an intergalactic explorer, you are going to need resources, such as Plutonium, Iron, and a host of others that are used in fuelling, crafting, and repairing. And so the journey begins.

But this is also when you run into your first frustration: the inventory system is very restrictive, giving you meager room to store your items. Especially early on in the game, it feels like you are constantly managing your inventory, moving things around from your Exosuit to your ship to free up space, or even destroying things as a last resort. A particularly irksome aspect of this is that the game inexplicably forces you to have at least one space free before you can even open a new box, or initiate a conversation with an alien (more on that later). At first, I reluctantly destroyed something to see what was in the box, only to find out it was the same thing or worse. After a while, I sometimes skipped opening crates and boxes altogether. 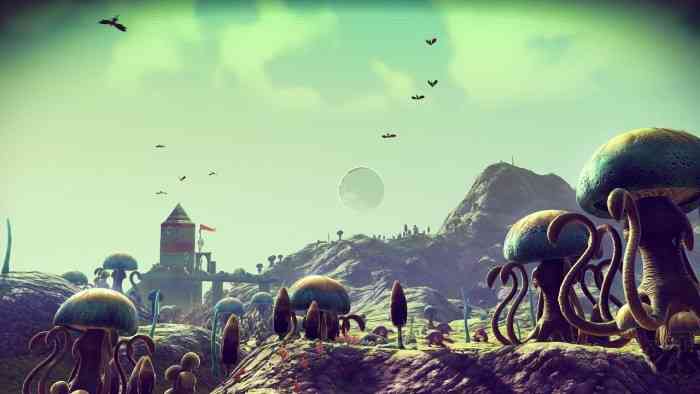 To be fair, the inventory system becomes less of a problem as you progress, as you can add extra slots by finding upgrades scattered on planets. You will also eventually save up enough Credits (the game’s currency) to buy a new, bigger ship. Like many gripes I had with No Man’s Sky, the inventory limitation is more of an issue in the first few hours of play – stick it out and it will get better.

What exactly you “do” in No Man’s Sky has been the subject of much pre-launch curiosity. Once you have gotten your ship repaired and into space, you find out that your end goal is to reach the center of the Galaxy. What awaits you there? Well, you meet God, and he turns out to be a total dick … no, wait, that’s Star Trek V. Honestly, in No Man’s Sky, the “ending” seems a distant and maybe even secondary goal, whatever shape it takes, and you find yourself focusing more on the journey itself. Stopping off at new planets, gathering fuel, crafting upgrades, and interacting with the odd alien sitting glumly in a shelter awaiting your arrival.

“Honestly, in No Man’s Sky, the “ending” seems a distant and maybe even secondary goal, whatever shape it takes, and you find yourself focusing more on the journey itself.”

In theory, there are a lot of varied things to do in the game, even aside from the main quest. Talk to aliens and learn their languages; follow the distress signals scattered around to find out who or what is making them; find and catalog new plants and animals. In practice, however, the constant need to refuel your Exosuit, your ship’s Thrusters, even your mining Multi-tool gun thingee, becomes a bit of a grindy chore at times. I feel like Hello Games could address this quite easily by making fuel go a lot further. At the very least, your gear should automatically draw its fuel from your inventory, rather than you having to always open the game’s Destiny-like menu every freakin’ time, and manually put the fuel in the place that needed it.  I wanted to explore planets and especially space, but what I found myself doing a bit too much in No Man’s Sky was gathering rocks, and filling gas tanks.

Another seeming letdown in No Man’s Sky is that the much-ballyhooed plethora of planets to explore comes off as very uniform and repetitive. My first few planets were very similar – arid, semi-desert rocks in space with few flora of interest. Animals also seemed to lack variety; this one was a six-legged bobcat-type thing, that one was four legged but essentially the same thing. You can scan the plants and animals, and rename them if you wish. This provides some short-term fun as you play God and give critters whatever crazy name you want, and imagine some other player someday stumbling upon them (a highly unlikely event if we are to believe the game’s developers). There are limits to what names you can choose, though – I tried to christen one particularly aggressive life form the “Asshole Crab,” but was blocked by the game’s Profanity Censor. Oh well. 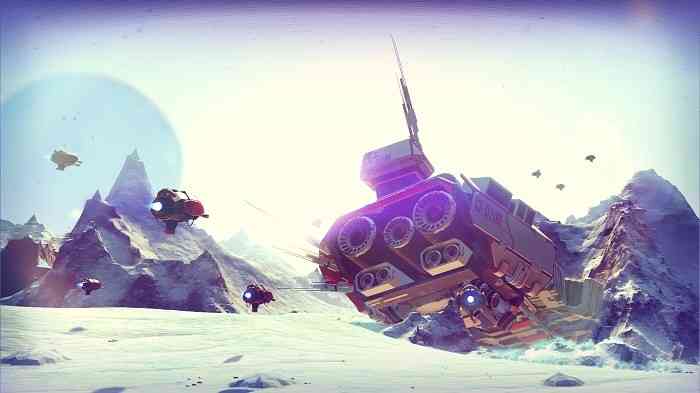 But again, this apparent sameness among planets has perhaps been overblown by some early players who, I suspect, maybe only played No Man’s Sky for a few hours. Because I started finding some very different and weird worlds after my 15th hour with the game. In fact, my 9th and 10th planets were unlike anything I had seen before – one had a caustic acid rain that made traveling on foot dangerous; it was very lifeless but had huge deposits of rare resources. The other was a lush, almost tropical place teeming with fauna, including huge flying whales and a crazy, hopping plant that became my faithful pet when I fed it some Carbon. These were both the first places that I felt were worthy of exploration and not just mining. My time with No Man’s Sky gave me the sense that it is a very slow burn and an experience that only reveals itself after hours of playing. This might turn off some players, but I grew to enjoy myself more the longer I played.

So it turns out that planets do have variety if you continue looking. It is on the individual planets themselves, however, that No Man’s Sky could still use some work. Each has one biome that covers the entire surface, uniformly. That is important because it makes exploring the entire planet pointless. If you’ve seen one part, you’ve seen it all. Once you’ve mined the place for its valuables, and discovered some landmarks like Waypoints or Totems to get some rewards, you have no real incentive to stay – it’s off to the next world, and the next, in a continuous cycle.

“My time with No Man’s Sky gave me the sense that it is a very slow burn and an experience that only reveals itself after hours of playing.”

What the game perhaps needs is base building. If you could build a “home,” a la Minecraft, there would be reason to stick around, and maybe even have a crafting center and a place to store your resources. This would solve the inventory issue as well. Hell, they could even just add locations with dilapidated shacks that you could repair, like the broken-down ships that are currently in the game. I bet that Sean Murray and the Hello Games team add such a feature in future updates. Until then, planets will only be (sometimes beautiful) temporary pit-stops in No Man’s Sky’s interstellar journey.

But what a journey it is. No Man’s Sky is an amazing technical achievement – a real universe with real planets that can be visited, one by one, in a continuous journey, load-screen-free. That planet you see in the sky? You can lift off and fly to it, and then look back up at the planet you were just on. That’s as incredible to experience as it is to describe. The feeling of leaving a planet in your spaceship, then looking back down, literally gave me goosebumps – every time I did it. No Man’s Sky is at its best in the space flight sequences, which capture perfectly the feel of being a real astronaut with your very own spaceship, like no game I have ever played before. There is even some fun space combat at times, as you are attacked by pirates. Play the game on a large projector screen (and maybe even have David Bowie’s “Space Oddity” playing in the background) and No Man’s Sky becomes truly sublime. 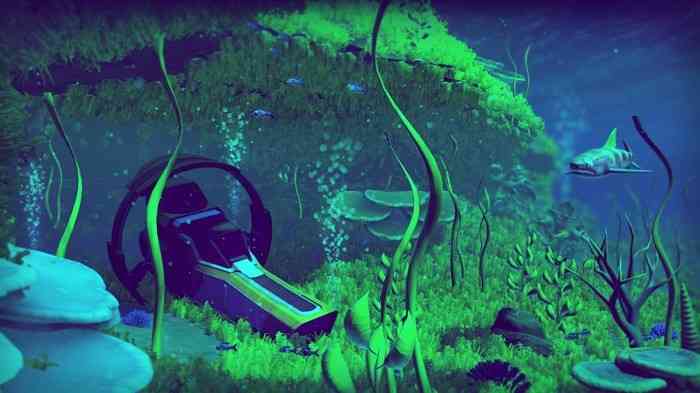 On the planets’ surfaces, visuals are pleasant to look at, reminiscent of the stylized sci-fi art of the 1960s and ’70s. Colored filters add atmosphere, and little touches like lens flares add a sci-fi movie vibe that I quite enjoyed (but not everyone will). The game’s use of resource-conserving voxels over polygons means some downsides visually, though. For example, water looks nice from a distance, but lacks movement and doesn’t look real close-up. Destructible structures, such as mineral deposits, have no weight, so pieces of mountains hang in the air even after you’ve blasted the rest of them with your mining tool. I also saw massive pop-in of landscape features, and you’ll find whole mountain ranges suddenly materialize in front of you as you fly around a planet in your ship. All of this is the downside to the game’s very smart and efficient use of file space (a mere 5 GB on my PS4 HDD) and algorithms to generate each random planet. Bottom line, No Man’s Sky has a nice artistic aesthetic but is not state-of-the-art visually.

“Give No Man’s Sky time, let yourself absorb its sometimes slow and subtle pace, and you will find a truly unique – and satisfying gaming experience.”

At the end of the day, I judge a game by one simple fact: how much I want to keep playing it. By that standard, No Man’s Sky is a great game. Sean Murray and the team at Hello Games promised us a huge, open universe in which we could live out our dreams of being interstellar explorers. And they pretty much delivered – think about how amazing that is. Could there be more depth to the planets? Yes. Does the minutia of resource-management get tedious at times? Definitely. But the core experience of breaking the bonds of gravity and traversing space, flying to distant worlds and landing on them without load screens, is always compelling and actually gets more fun the longer you play. I look forward to my continuing my journey to the center of the galaxy, and after over 20 hours I am still having fun, Give No Man’s Sky time, let yourself absorb its sometimes slow and subtle pace, and you will find a truly unique – and satisfying gaming experience. 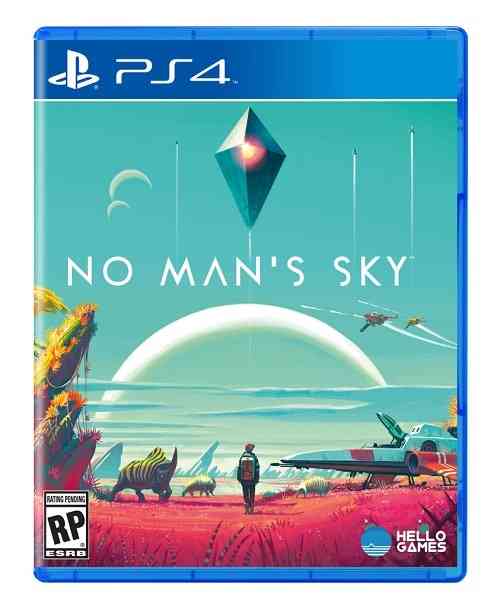